Review up to the last time

Data analysis for improving POG 1-web scraping with Python- shows the profile (gender, pedigree, stables) of horses born between 2010 and 2013. Etc.) and earned prizes during the POG period. The obtained data is saved separately for each year of birth under the file name "horse_db / horse_prof_ (yyyy) .csv".

Purpose of this time

This time, based on these data, I would like to analyze the causal relationship between the horse profile and the prize money won during the POG period, and find out the law of POG winning.

Unfortunately, I'm not a data analysis specialist. Therefore, it will be possible to draw some conclusions through trial and error. Ultimately, it is expected that multiple regression analysis and machine learning will be taken care of, but first, I would like to understand the characteristics of each factor by simple analysis.

This time, we will proceed with the analysis on a jupyter notebook that seems to be suitable for data analysis including trial and error. In addition, the pandas module is used to calculate statistics (mean, variance, etc.) for each factor.

First, a data frame to be analyzed is generated.

A part of the generated data frame is shown below.

As it is, the date of birth and the auction transaction price are difficult to handle, so I will mold it a little.

Let's start the analysis immediately. As a result of trial and error, the data aggregation script settled in the following form.

The result was a gelding advantage, but it is uncertain whether it was a gelding during the POG period. At least it turns out that mares are at a disadvantage.

The sooner you are born, the better.

I feel that the ranking will change as much as possible depending on the setting of the prize filter, but when sorted at a rate of 10 million or more, the following results were obtained. It is a pity that Matsuda Stables, which is scheduled to retire in February 2016, ranked first.

Surprisingly, the clubs that produce active horses in G1 have not come to the top. Is there a big difference between hit and miss for club horses?

Until now, I had chosen horses with the idea of "Northern Farm for the time being if I was at a loss", but I got data that confirms that it is a reasonably reasonable idea.

Unfamiliar overseas horses came to the top. Considering the population parameter and average value, it can be said that Deep, Da Major, Hearts, and King Kamehameha are for POG.

I don't know what it is anymore. As the good results of horses born from the combination of "Stay Gold" x "Mejiro McQueen" and "Deep Impact" x "Storm Cat" have become a hot topic in recent years, it seems necessary to re-evaluate the combination of father and mother.

Horizontal axis: auction transaction price, vertical axis: POG period prize money scatter plot was created. It seems that there is no need to worry about the auction price in POG as no significant correlation can be found. 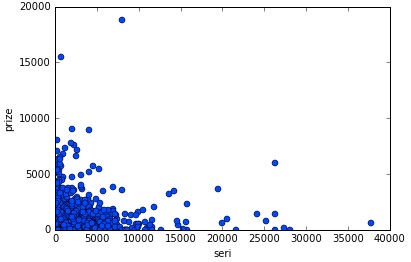 To summarize the results obtained in this analysis, if you select a horse that is an early-born stallion and is produced by Deep Impact, Daiwa Major, Heart's Cry, or King Kamehameha and is owned by an individual owner, you can select a horse that will win with a reasonable probability. It turns out that it is.

However, in this analysis, there is still room for improvement, such as the fact that the prize threshold is set to 10 million and the effect of the combination of each factor has not been verified, so it is not possible to easily draw a conclusion. Based on this result, it seems necessary to review the analysis method itself.