Reading Note: An Introduction to Data Analysis with Python

This is a memo that I got caught while reading the introduction to data analysis using Python. I prefer to run in Pycharm over IPython. I am adding while reading. I'm a beginner in programming, and I'm stuck in various places, so I'm writing it as a reference for those who will learn it later and as a reference when I forget it.

Whether you run it in IPython or in an integrated development environment,

Implemented. plt and pd are personal freedoms, but there is a convention that they are plt and pd. numpy is np.

When displaying a graph in an integrated development environment

I wrote that and it worked.

But it seems okay. If you plot with multiple data and then plt.show (), multiple graphs will be displayed at the same time. Use subplots to display multiple graphs side by side. If it is a book, it will appear on page 45. For more information on matplotlib, see here.

P.37 pivot_table In pivot_table, rows and cols appear, but as of May 28, 2016, an error (TypeError: pivot_table () got an unexpected keyword argument'rows') occurs. According to here ・ Rows to index, ・ Cols to columns, It can be avoided by changing it. It actually solves it in my environment. Similar editing is required where pivot_table appears after P.37 (P.44 and P.49).

As of 06/04/2016, Warning will be issued asking you to change group.sort_index to group.sort_values. I changed it to values quietly.

I'm using Pycharm instead of IPython, but as in the book, where I make a subset and plot it, according to the book,

Then, ValueError: The truth value of an array with more than one element is ambiguous. Use a.any () or a.all () is displayed. There must be a good reason why this is displayed, but at present, I don't understand.

For the time being, by changing plt.show (var) to plt.show (var.all ()), I was able to draw a graph that looks the same as a book. 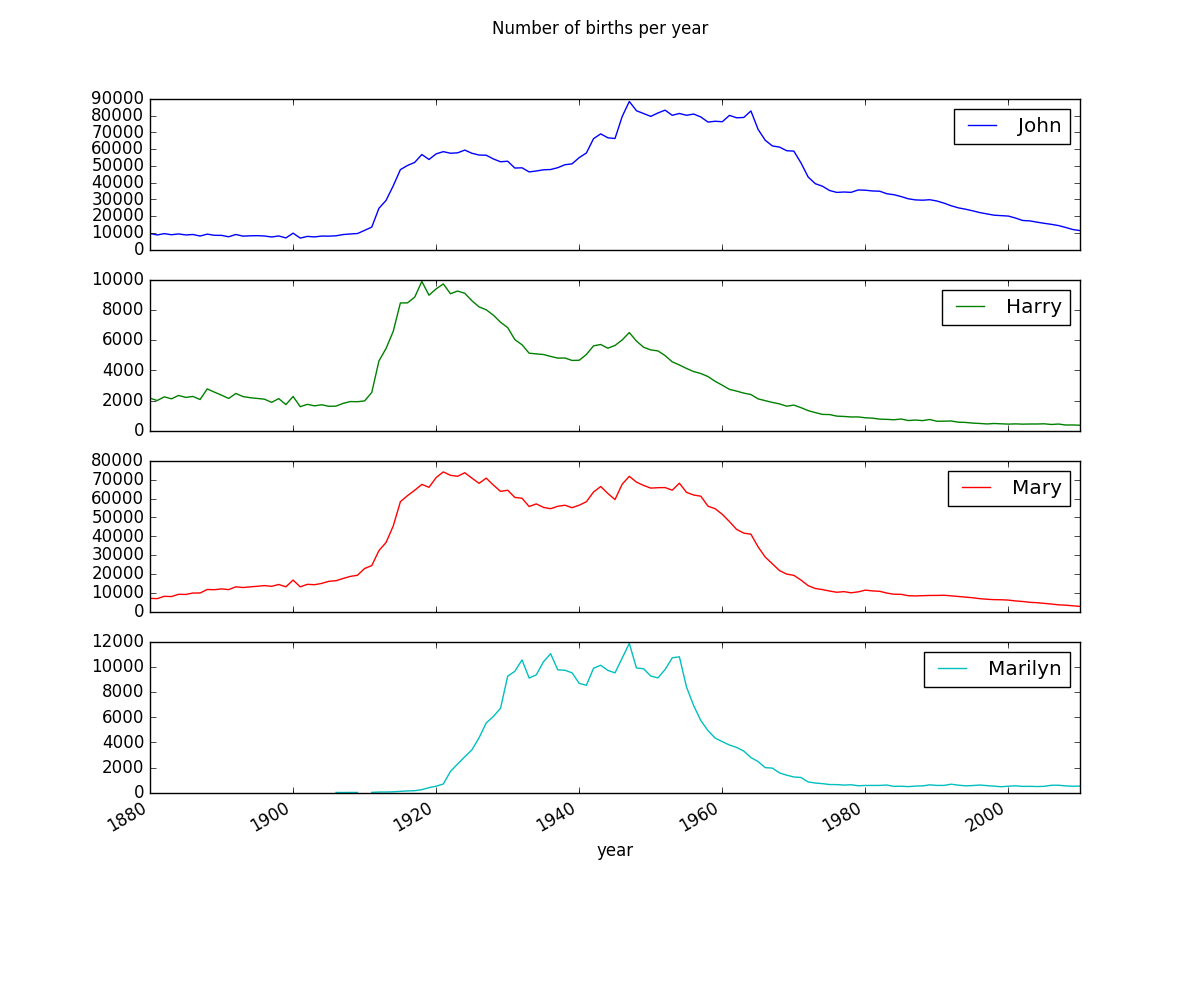 Is it a good feeling to keep it?

P.43 get_quantile_count() Due to changes in API specifications, it is necessary to describe as follows.

When executing other than IPython such as Pycharm, import

Pycharm also allows you to create and run Jupyter notebooks. It can be created in the same way as a .py file. I haven't found any meaning in Pycharm so far. Is there any useful function? As of 06/04/2016, you can't see the result of % magic or% reset? Even if you execute it from Pycharm.

In the case of Pycharm, the paid version (Professional Edition) is required to calculate the processing speed.

I interpreted it as, and confirmed the process of multiplying it by 10 and adding it. Needless to say, since it is running in Pycharm,

It is described as. It may be easier to use IPython obediently here.

Isn't it natural that the order is not x, y, z? Is it natural to speak another language? I'm confused because it's the first time I've taken 3D arrays seriously in Python.

As described in the book

Then it doesn't work. In the first place, I don't understand what I'm doing.

For the time being,

It works normally, so I'll do it. There is a proper translation in the definition of data. I'm not sure why it's here and there's nothing else.

P.108 randn I encountered it on the previous page, and there was a translation in the previous appearance, so I think that there is no problem, but ʻIf you are importing numpy as np, you will get an error if you do not write np.random.randn (8) `.

At first, I was planning to run it in Pycharm, but it became more and more troublesome, and I got stuck because I was running it in IPython (Juypter Notebook).

I was worried that the graph would not be displayed even if I entered it according to the book, but I was just worried. All I had to do was plt.show ().

However, I thought that the graph would be displayed inline like mathematica, so the behavior was unexpected (⇒ If you enter% matplotlib inline, it will be displayed inline). Also, it's a little surprising to be able to insert formulas in TeX format in the title of the graph.

After all, it looks like this to display well on Jupyter Notebook.

The initial value of the axis of the sort function is -1. From Official Documents. Therefore, in the case of a two-dimensional array, the column direction is sorted when nothing is specified.

P.121 mat.dot(inv(mat)) The execution result of mat.dot (inv (mat)) does not match the book. At first, I thought that mat.dot (inv (mat)). Astype (np.float32) could be used to convert the data type of the NumPy array, but it didn't seem like that, so I multiplied it by 1000. Rounded to an integer (rint) and then divided by 1000. Please tell me the correct way.

In the comment of the book, there is a description that the notation is other than np.dot, but now it seems to be @. So, I think you can calculate with X.T @ X.

I think the point of understanding is that "in the case of an array of boolean values, the index that is True at the very beginning is returned" on page 124.

frame2.ix ['three'] is the row retrieval, and when fetching the row, use ix, If you are not using ix, like frame2 ['debt'], it will be a column retrieval, About, what you should remember.

When slicing is used, such as ʻobj ['b':'c'] , it is applied to the line. The same applies to index value reference data [: 2]`. If you just say data ['two'], it works on columns. When it comes to slicing, it acts on the index. I'm a little confused.

P.154 obj.order() order now seems to be deprecated. A message was displayed to use sort_values (). Will it be an error in the future?

P.155 frame.sort_index(by='b') This also seems to be deprecated now. Certainly confusing. From python frame.sort_values (by ='b') is recommended.

p.155 frame.sort_index(by=['a', 'b']) You will be asked to sort_values here as well. This means that after sorting in column a, the same value is sorted in column b. I want a little more explanation in the book.

In the book, all the items have numbers, but if you try it at hand, is. Did the specifications change at some point? Even if you look at the Manual, I'm not sure.

pp.160 import pandas.io.data as web When you do this,

It will be displayed. So, for the time being, I did conda install pandas-datareader.

As it worked. In the manual, I wrote ʻimport pandas_datareader as pdr so that it works even if pdr.get_data_yahoo` is done, but it seems different.

all_data.iteritems() The description here seems to be based on Python2 series. In Python3, the specification of (dict) .items has been changed, so the description around here is

It looks good. Maybe the answer is here http://stackoverflow.com/questions/13998492/iteritems-in-python It seems to be included in, but I don't understand English very well.

Because it is troublesome to imitate and input

I want you to write.

P.167 .dropna(thresh=3) I was a little confused by the idea of the threshold, but it means that the value is set to a number other than NaN. When I often read P.166, it certainly says so. On the contrary, I was a little confused because I thought it was the number of NaN. By the way, it would be better to understand the operation of df.dropna (thresh = 3) by setting it to 2.

I want you to make a sample.

became. Is it a slight specification change?

P.172 MultiIndex It depends on import, but if you import as described in this book,

So, if you don't write pd, it's useless. I wonder if I didn't check the contents when translating this.

P.176 pdata.swapaxes('items', 'minor') The result just before this is

So I tried pdata = pdata.swapaxes ('items','minor_axis'), but it seems that it doesn't matter whether _axis is present or not. In either case, no error occurs.

Even in the previous part, import is

read_csv(), read_table() Although read_csv () and read_table () are written separately, it is possible to read a file by specifying sep = in the same way for read_csv and read_table.

However, reading the Series add manual will deepen your understanding. http://pandas.pydata.org/pandas-docs/stable/generated/pandas.Series.add.html

If fill_values = 0 and NA value is not processed, the result of addition of Series including NA will be NA, and .add is used for the purpose of preventing the aggregation result from being full of NA.

P.187 sys.stdout Beforehand, import sys If you don't, it won't pass. Isn't this written on the assumption that you are familiar with the Python language?

One thing I'm curious about is that when you say cols, you don't get an error, you just pick up and write out columns other than the one you want. Should I get an error? bug?

In the environment at hand, unlike the results of the book, there is no time information,

P.192 urlib2 It seems that the packages are integrated in Python3 and only urllib is available. Also, you can't just modify it to from urllib import urlopen, you have to do it with from urllib.request import urlopen. This is also affected by the change from Python 2 to 3. Reference: http://diveintopython3-ja.rdy.jp/porting-code-to-python-3-with-2to3.html

pd.load() However, in the latest pandas, pd.read_pickle('ch06/frame_pickle') It has become.

It's like a Cartesian product. I heard it for the first time.