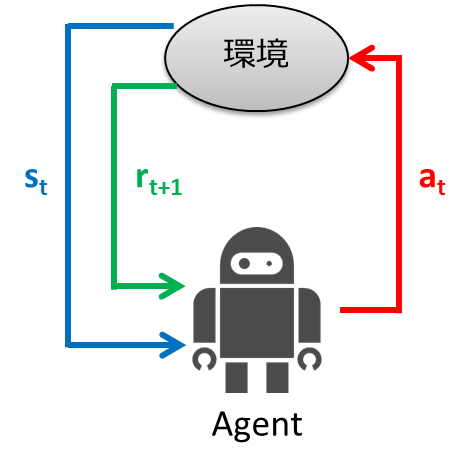 The purpose of reinforcement learning is to obtain a state-to-behavior mapping (policy) that maximizes the gain (cumulative reward) that an agent obtains.

In reinforcement learning, the above framework is modeled by Markov decision processes (MDP), and learning algorithms are considered. In this article, we will explain reinforcement learning separately in theory and practice. In the theory section, we will explain MDP and learning algorithms, and in the practice section, we will implement what was explained in the theory section using the programming language Python. We recommend that you read them in order, but if you say "Komake Kota is good!", Skip the theory section and read the practice section. 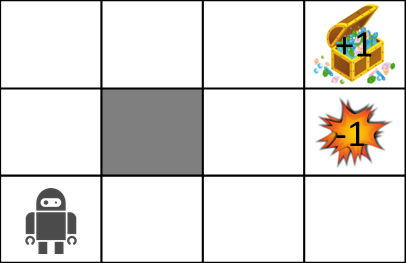 The rules of the maze world are as follows.

The stochastic transition will be explained in a little more detail using the figure below. 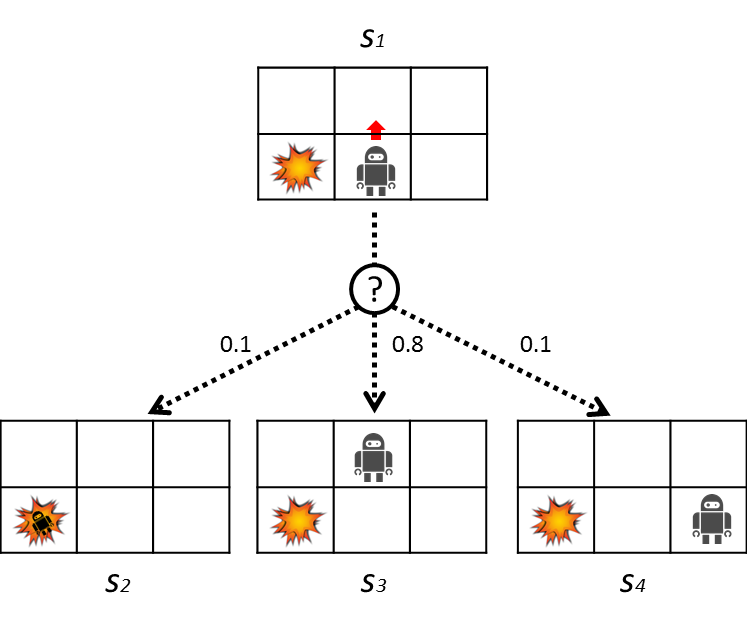 Now, did you understand the problem setting? Now that we know, we will model the problem with MDP.

MDP is defined by the following 4-term set

Let's apply each to the problem settings explained above.

The purpose of this MDP is to learn behavioral strategies that maximize gain (= cumulative reward). This action strategy is called ** policy **.

The goal of MDP is to get the best policy $ \ pi ^ *: S \ rightarrow A $. Policy can be thought of as a function that maps state to action. Policies tell us what to do in each situation. Optimal policies also maximize expected gains.

Let's take a look at the optimal policy changes when changing the rewards obtained during the transition.

This figure shows the change in policy when the reward obtained from the state transition is gradually reduced (penalty is increased). Policy learns from the idea of maximizing the expected gains obtained. Therefore, if the penalty due to the state transition is small, it will try to aim for the goal even if it detours, and if the penalty is large, it will take a strategy to end the game promptly. Still images are also available for easy comparison. 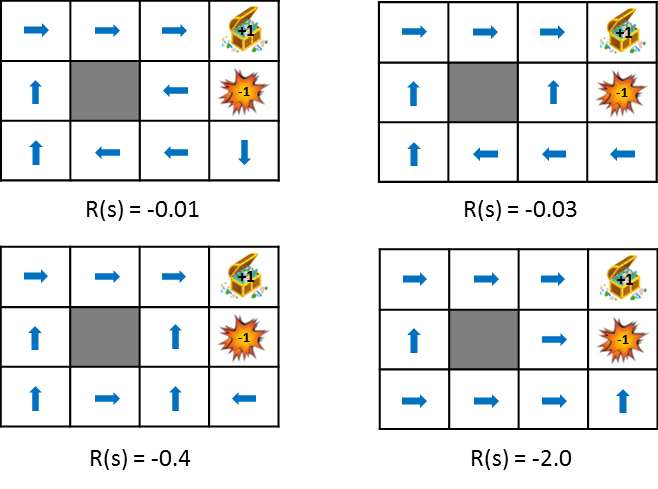 A little more about rewards

The reasons for using such discount rewards are as follows.

So far, we know about the model called MDP. The remaining question is how to find the best policy. In the following, we will explain the value iterative method and Q-Learning as algorithms for finding the optimal policy.

The value iterative method calculates the expected gain from the state $ s $ when the optimal action is continued. The expected value of the gain obtained is considered because of the stochastic transition.

Once we know this expected gain, we know the value we will get in the future from our current state of $ s $, and we should be able to choose actions that maximize that value. The value is calculated by the following state value function. It looks complicated, but in short, it's just calculating the (expected) discount cumulative reward.

There is a non-linear calculation called max in this equation, and it is difficult to solve it with a matrix or the like. Therefore, iterative calculations are performed to gradually update the value. This is the reason for the name of the value iteration method. The value iterative algorithm is shown below. The amount of calculation isis.

** $ Q ^ * (s, a) $ ** represents the expected value of the discounted cumulative reward if you continue to take the optimal policy after selecting action a in ** state $ s $. There is a difference between $ U (s) $ and $ Q ^ * (s, a) $ whether they hold only the maximum value in each state or the value for each action. Therefore, the maximum Q value in the state s is equal to $ U (s) $, and the action a with this Q value is the optimal action. The figure below is the image.

The value iterative method when using the Q function is as follows.

Since it's a big deal, let's try to calculate the value of the red place below. 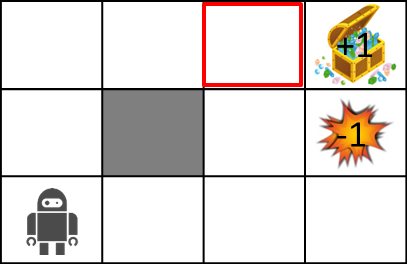 Use the following formula for the calculation.

Under the above conditions, the value in the red area is ...

Q-Learning Now, I am relieved that the optimal policy is required by the value iteration method. That's not the wholesaler. What's wrong?

The ** R ** method returns the reward for each state. The ** T ** method is a transition model. Although it is an abstract method here, it returns a list of transition probabilities to the next state and tuples (probability, s') of the next state when the action $ a $ is taken in the state $ s $. We will implement it with Grid MDP. The ** actions ** method returns a list of actions that can be taken in each state.

The GridMDP class is a concrete class of the base class MDP. This class is for expressing the world of the maze explained in the example.

The \ _ \ _ init \ _ \ _ method receives almost the same arguments as the MDP class, except that it receives the grid argument. The grid stores rewards for each state. Pass it like the following. None represents a wall.

The ** go ** method returns the state when moving in the specified direction. The ** T ** method is as described in MDP. It's actually implemented here. The ** to_grid ** and ** to_arrows ** methods are display methods.

The ** value_iteration ** function takes an instance of GridMDP as input and a small value epsilon and returns U (s) in each state as output. It looks like the following.

Then, by passing the result calculated by the value_iteration function to the ** best_policy ** function, the optimum policy is obtained.

Below is the code to try. However, as it is, it does not work because some required modules have not been imported. Therefore, if you want to actually run it, clone the repository here and run it.

As a result of implementation, the following policies can be obtained.

Q-Learning There is no dent, it's just like a spring

Please write Q-Learning when you have physical strength.

Udacity lecture video. The letters are hard to read, but the story is easy to understand.

The mathematical expansion of the value function is polite