Python Basic Course (1 What is Python)

Python is a programming language that appeared in 1991. It has the following features.

You may have heard that "Python is easy to learn" among those who are reading this page now. There are several reasons why Python is said to be good for learning.

"Forced indentation" is often talked about as a major feature of Python.

◆ C language program that returns the same result, but difficult to understand

Also, in the salary ranking by programming language as seen from the job offer There is also Survey results that won the 1st place.

The Python name comes from a comedy show produced by the British television station BBC. It is "Flying Monty Python".

The reptile python, which means the English word Python, is the Python mascot. It may be used as an icon. 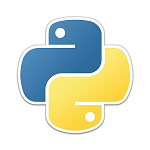