I tried to predict the survivors of the Titanic, which is a tutorial of kaggle.

** This time, instead of building a machine learning model to predict the probability of survival, we will look at the relationships between the data and investigate what kind of people survived **.

And I would like to use the obtained results when complementing missing values and generating features.

Import the library and read & check the train data

First, let's look at the missing values of the data, the summary statistics, and the correlation coefficient between each feature.

I would like to see the features related to Survived from the correlation coefficient, but it is a little difficult to understand if it is a table with only numbers ... Therefore, I will remove the covered values in this table and show the absolute value notation in the heat map. 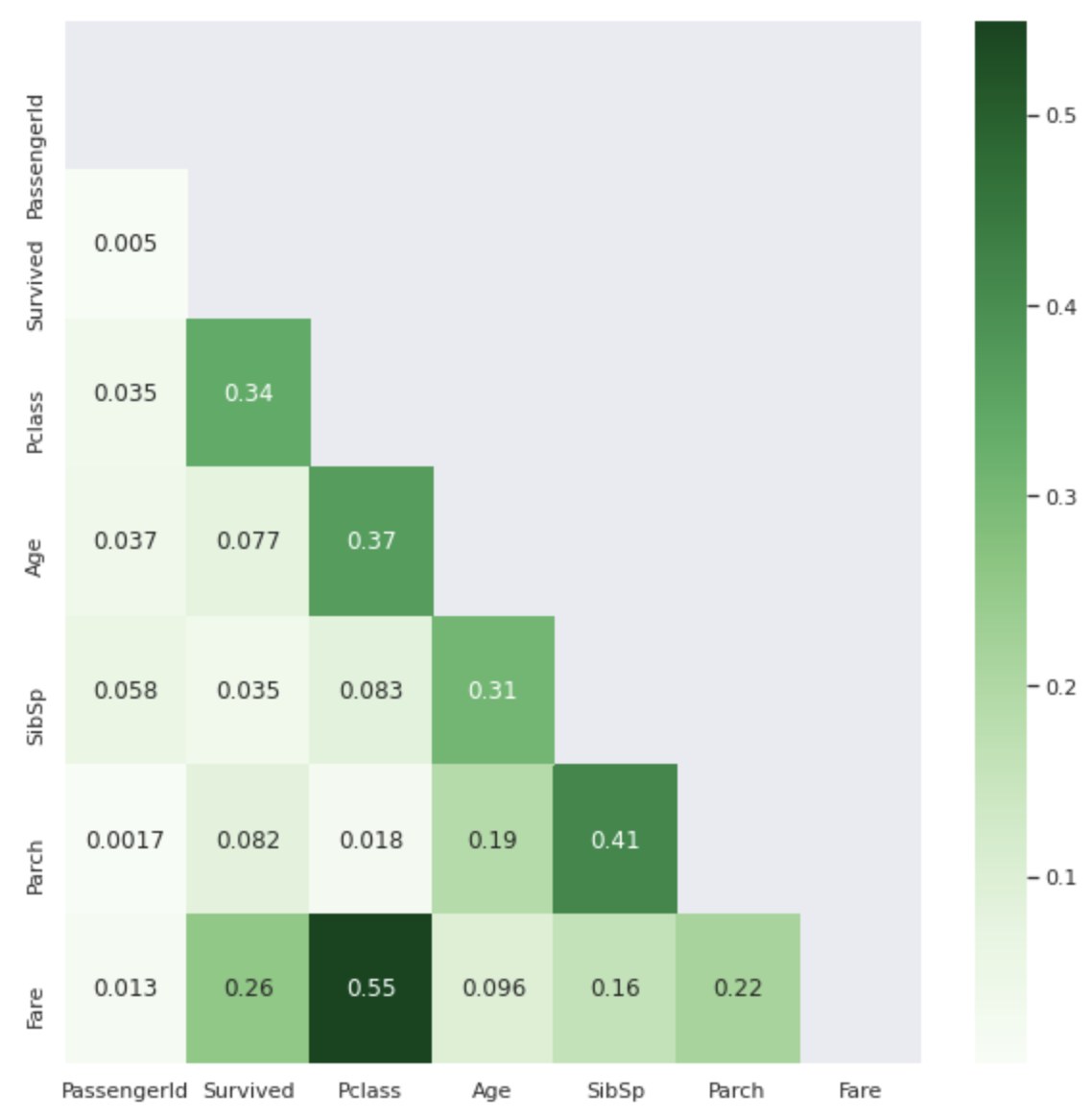 The darker the color, the closer the correlation coefficient value is to 1. Isn't it easier to see than the .corr () table?

I don't know about non-numerical features (Name, Sex, Ticket, Cabin, Embarked), but from the table above, it can be seen that ** Pclass and Fare ** are largely involved in Survived. .. 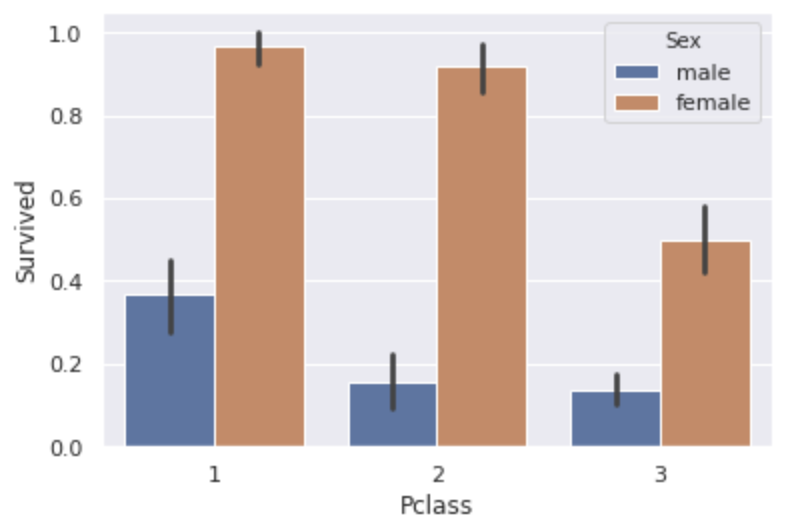 Also, the correlation coefficient between Pclass and Fare was 0.55, so when I looked at the relationship between the two, it became like the graph below. (* P class for people with Fare of 100 or more was 1 so omitted) 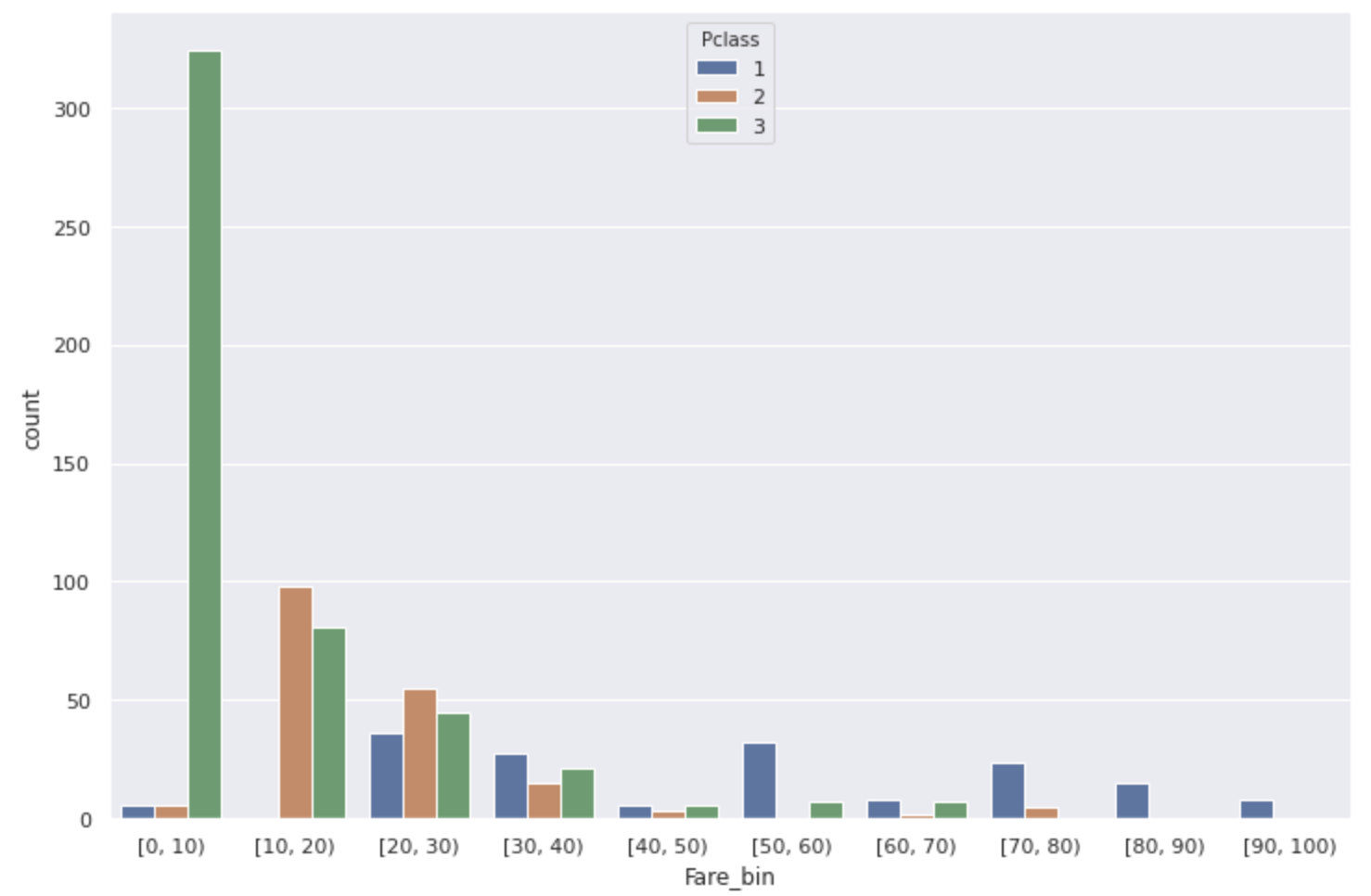 Most of the Fare [0,10) with low survival rates are low-ranking people.

Furthermore, looking at the data where the survival rate is 1.0 in the Survived and Fare_bin graphs, ** the surnames are common ** or ** the ticket numbers are the same **.

Also, even if the ** P class is 3 and the Fare is not high, if the ticket numbers are the same, the survival rate seems to be high **.

The fact that the ticket numbers are the same means that ** the family and friends bought the tickets together **, and that they were able to act together on board and help each other when escaping from the ship. It seems to be.

Now let's find out if there is a difference in survival rate depending on the number of family members and ticket numbers.

Using the values of SibSp and Parch that are based on the Titanic data, let's create a feature quantity'Family_size'that indicates how many families boarded the Titanic.

As with Fare, it seems that it can be used as a feature by classifying it into about 4 according to the number of family members. 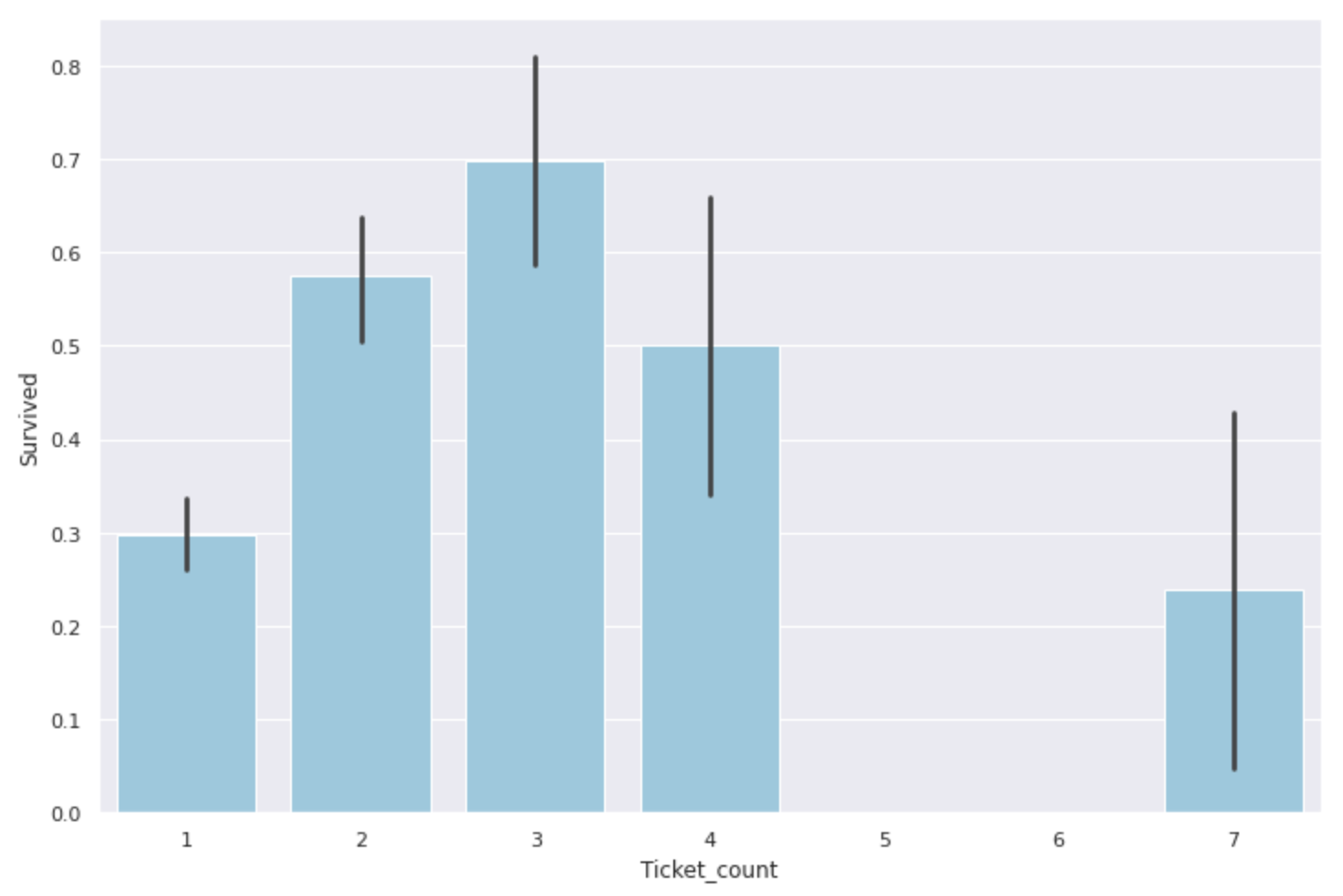 As with the number of family members, ** groups of 2-4 people are most helpful, and groups of 1 or 5 or more seem to have a low survival rate **. Similar to Fare and Family_size, this can also be classified as a feature quantity.

Now let's dig deeper into the information you get from your tickets. I referred to this site for the detailed classification of Tickets. pyhaya ’s diary: Analyzing Kaggle's Titanic Data

There are ticket numbers with numbers only and numbers & alphabets, so classify them.

First, let's see how the number-only ticket numbers are distributed. 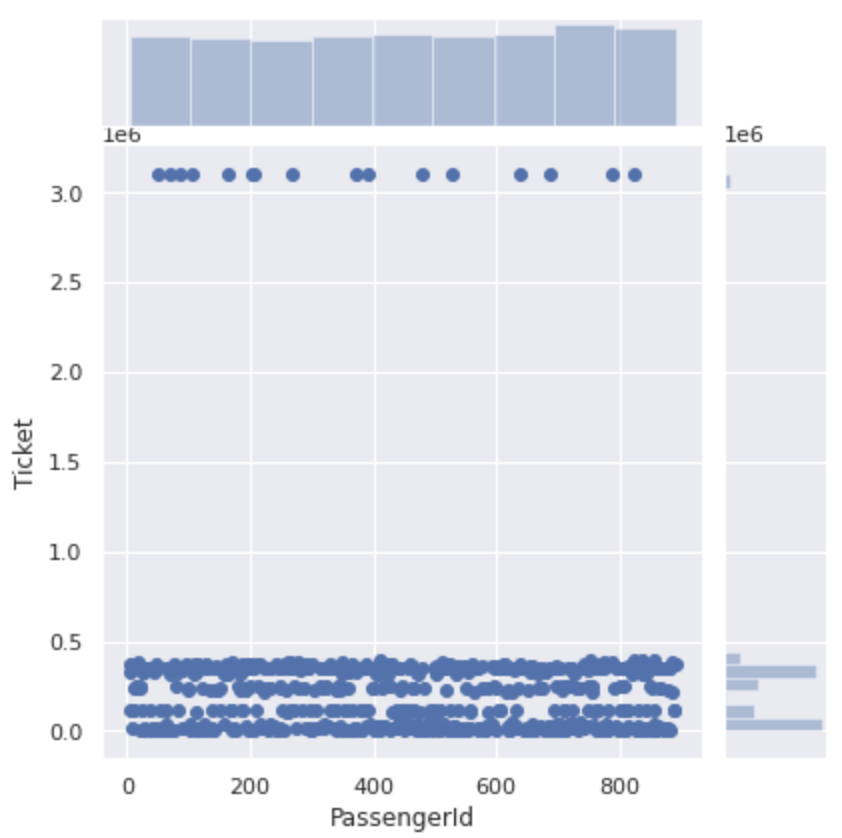 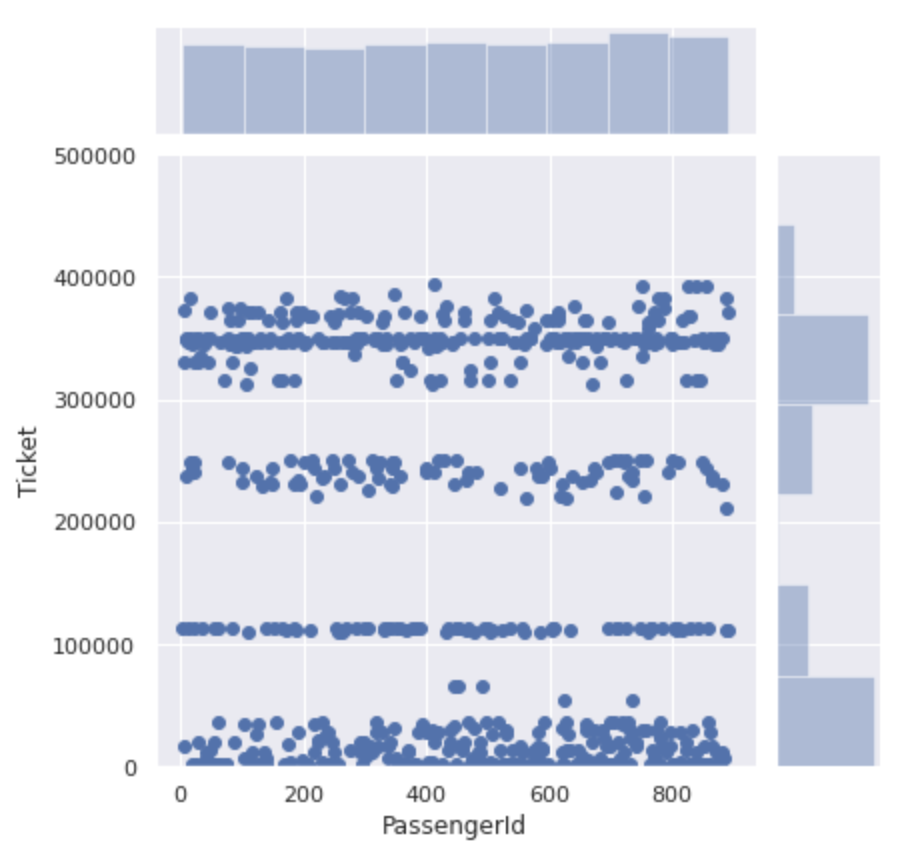 It seems that the ticket numbers are not just serial numbers, but ** there is a group for each number **. Let's classify this as a group and see the difference in survival rate of each. 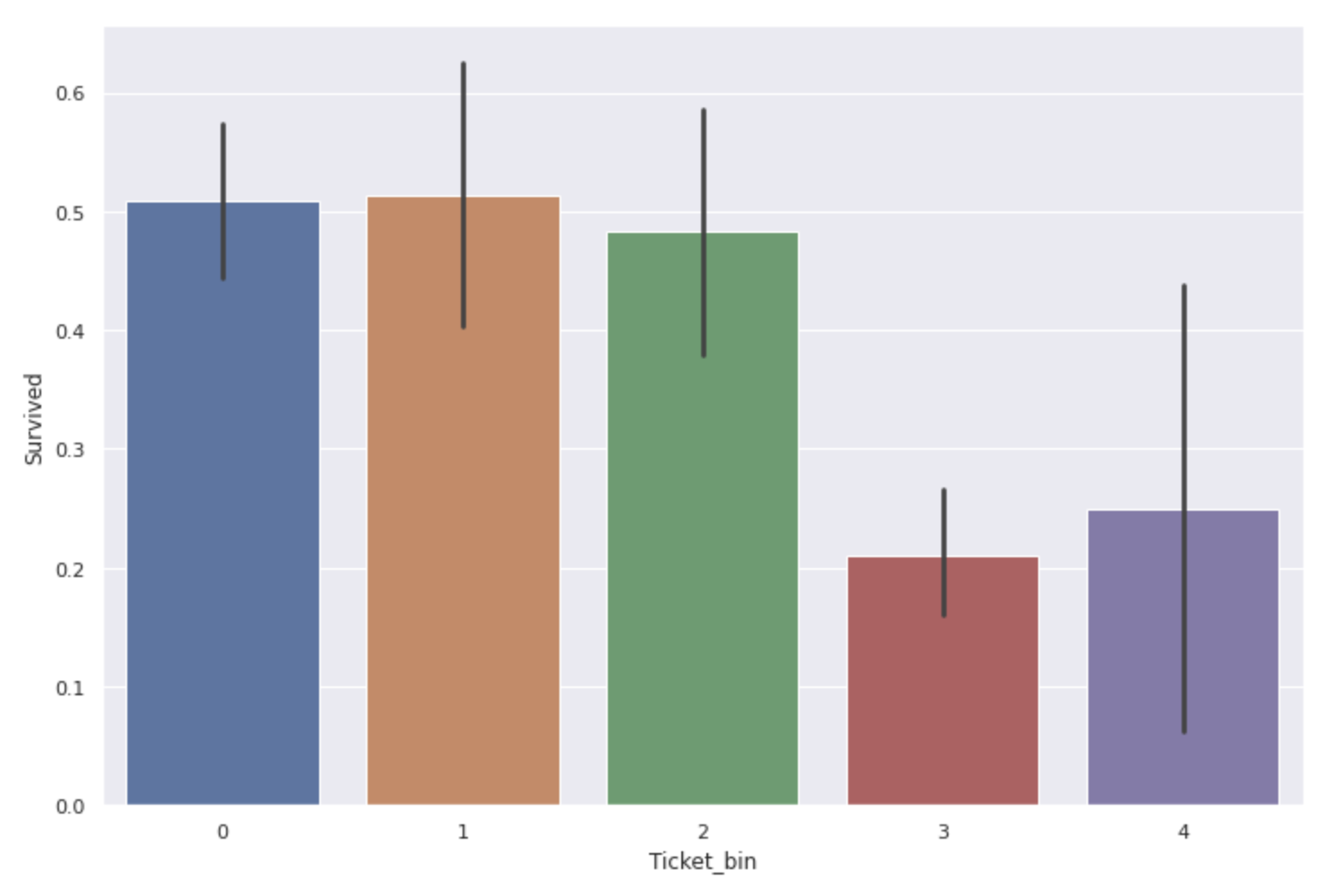 Next, we will look into numbers and alphabet tickets in the same way. First, let's check what kind there is. 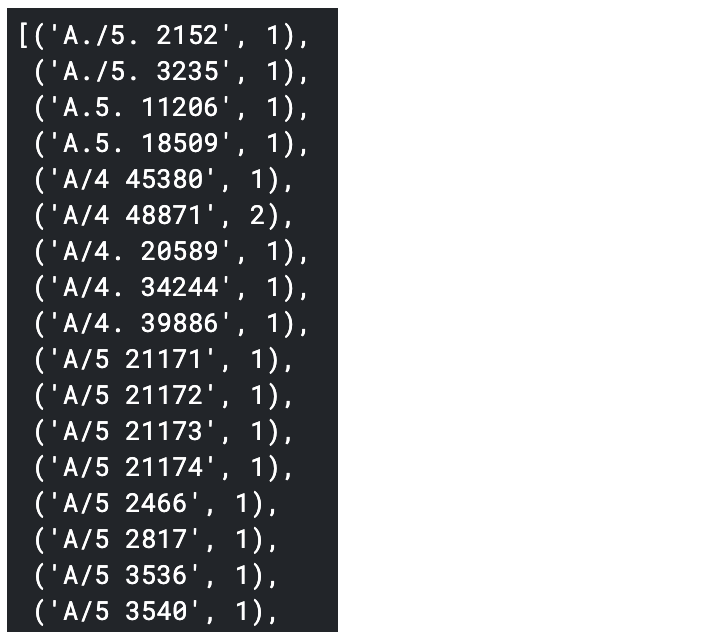 Since there are many types, classes 1 to 10 are given to those with a certain number, and classes with a small number are collectively set to 0. (The color coding of the code has changed due to the influence of''...) 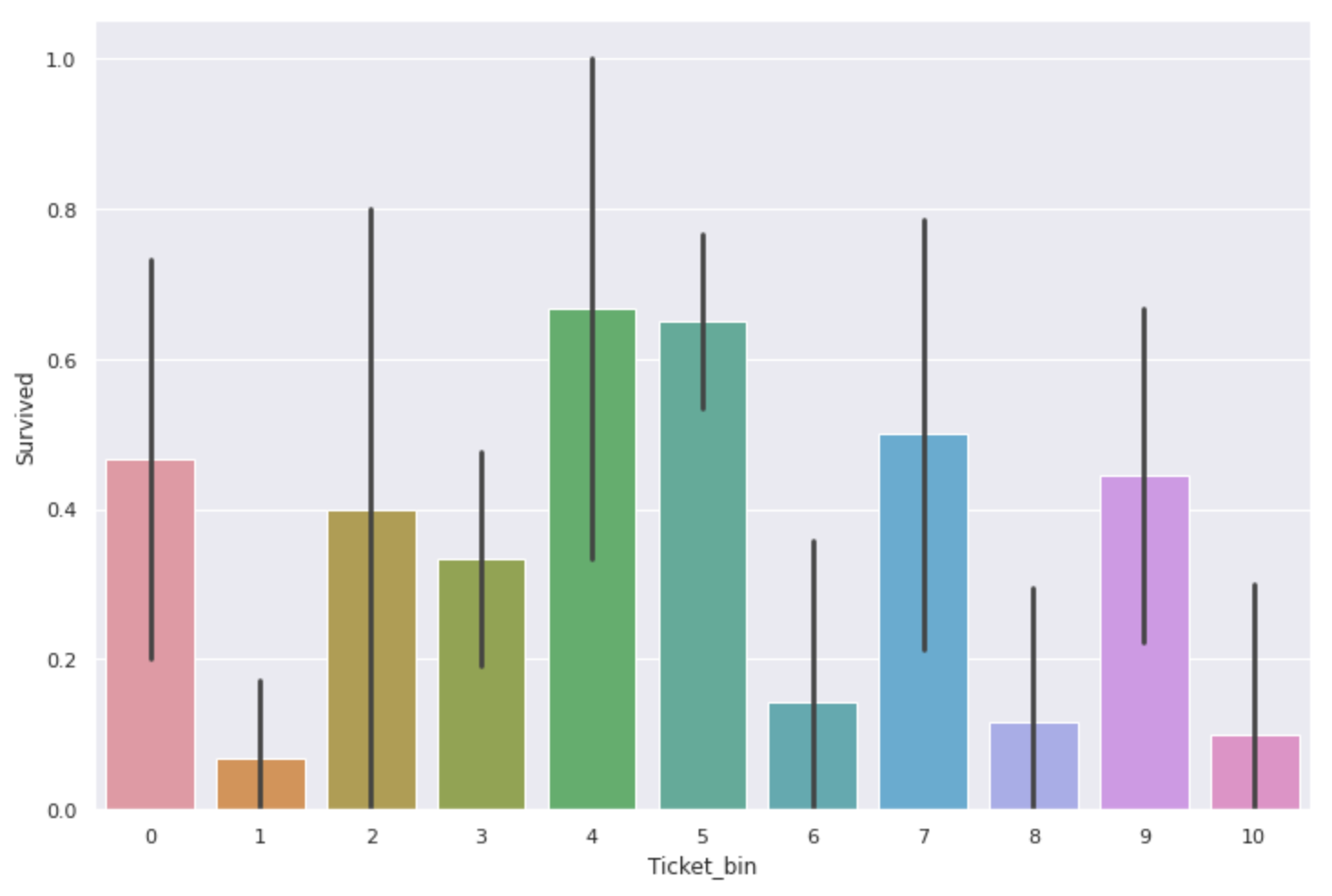 There was also a difference in survival rate here as well. ** The ones with'F.C'and'PC' are especially expensive **. However, there are only 230 data for tickets including alphabets in total, and the number of data is only about one-third compared to tickets with only numbers, so ** the survival rate value itself may not be very credible **. Maybe.

It seems that the survival rate changes depending on the ticket number ** because the numbers are divided according to the location and rank of the room **. Let's take a look at the relationships between Pclass and Fare, which are likely to be related to tickets.

↓ About tickets with numbers only 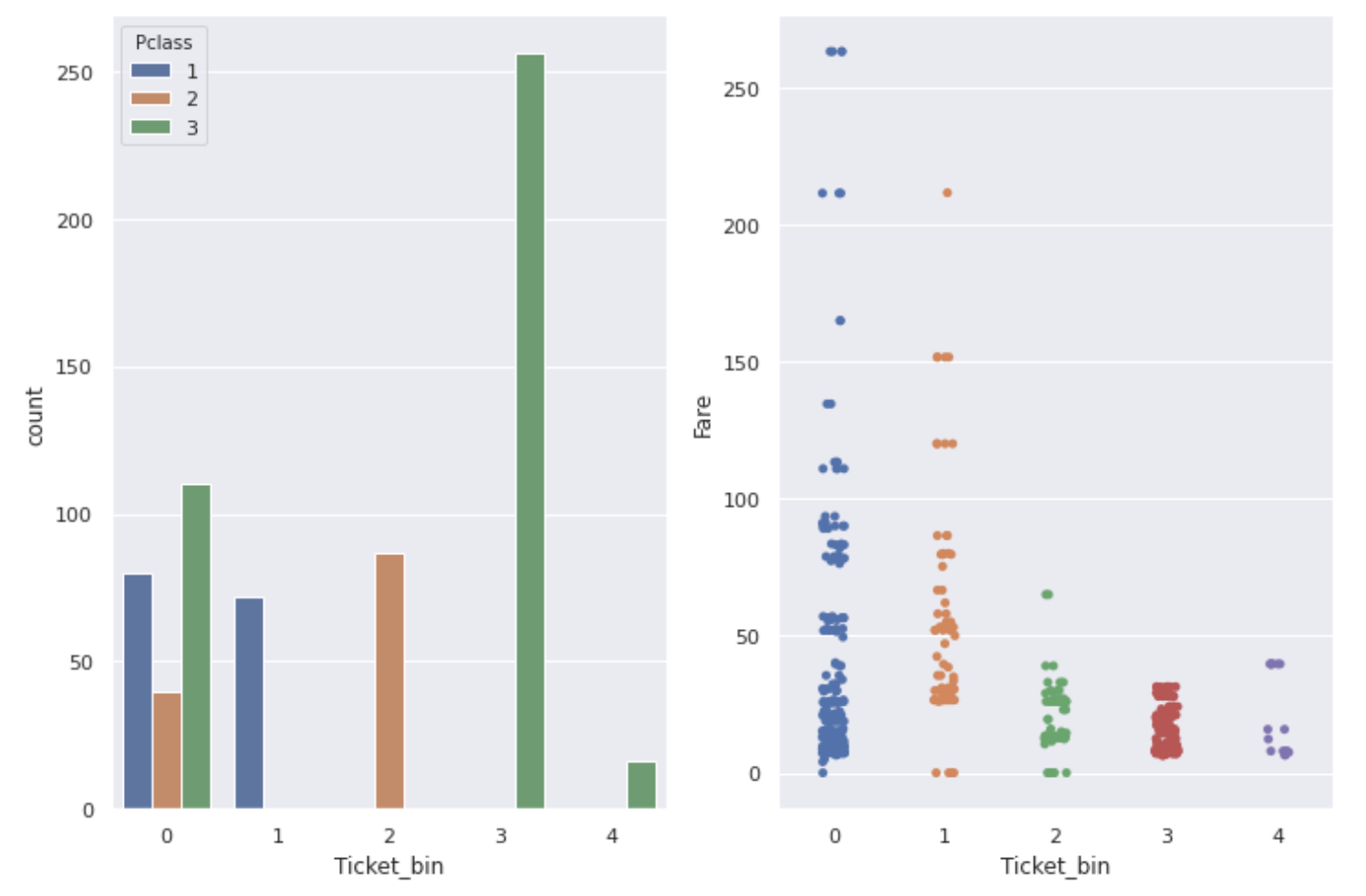 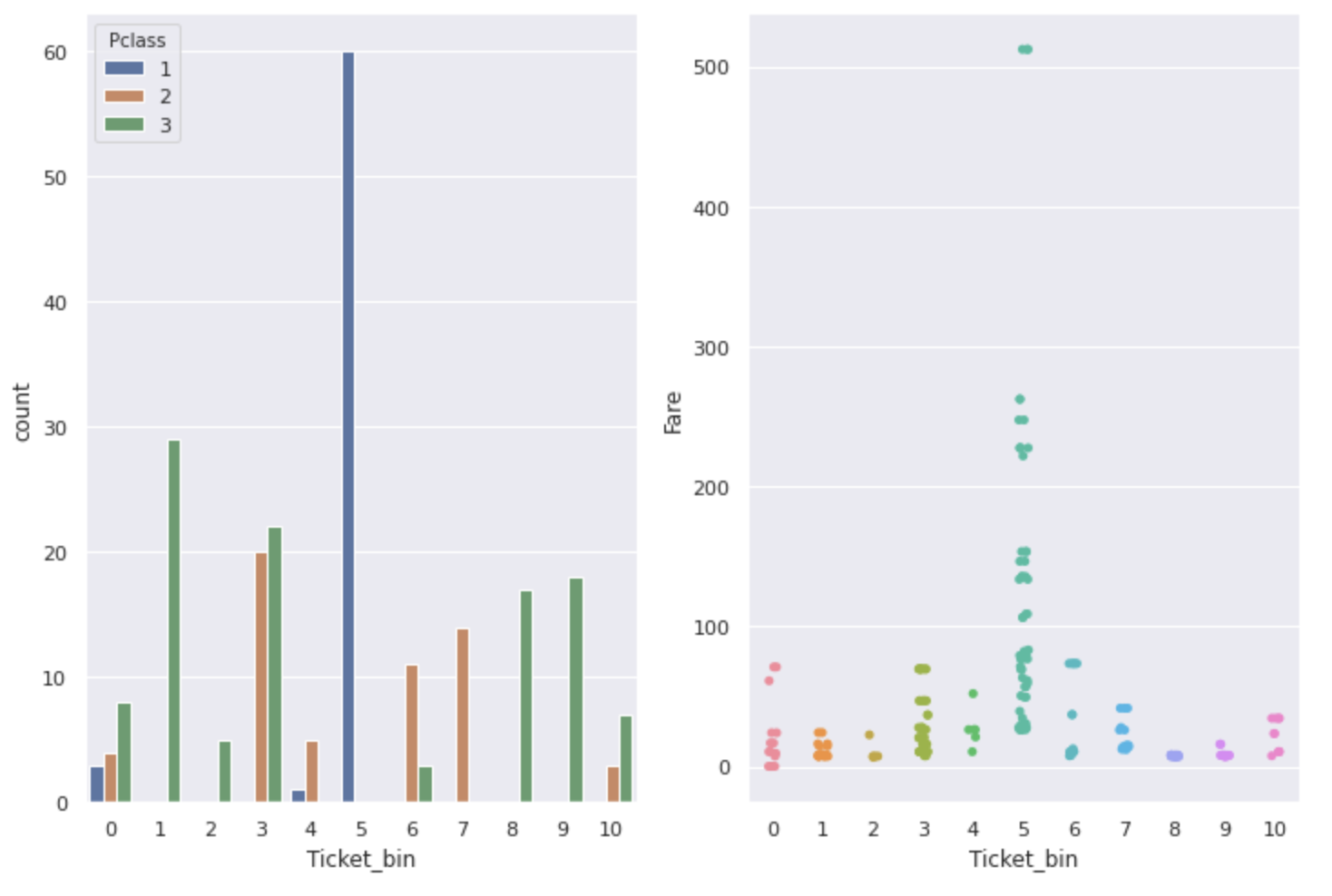 As you can see from the graph, ** Ticket, Pclass, and Fare are related to each other. Ticket numbers with a particularly high survival rate have a high Fare, and most people with a Pclass of 1 are **.

A ticket number that seems to be useless at first glance may be a useful feature if you search for it in this way.

However, looking at the results by gender, ** women have a considerably higher survival rate even if they are over 60 years old **. The low survival rate of the elderly in the graph on the left may also be due to the small number of women over the age of 60 (only 3). 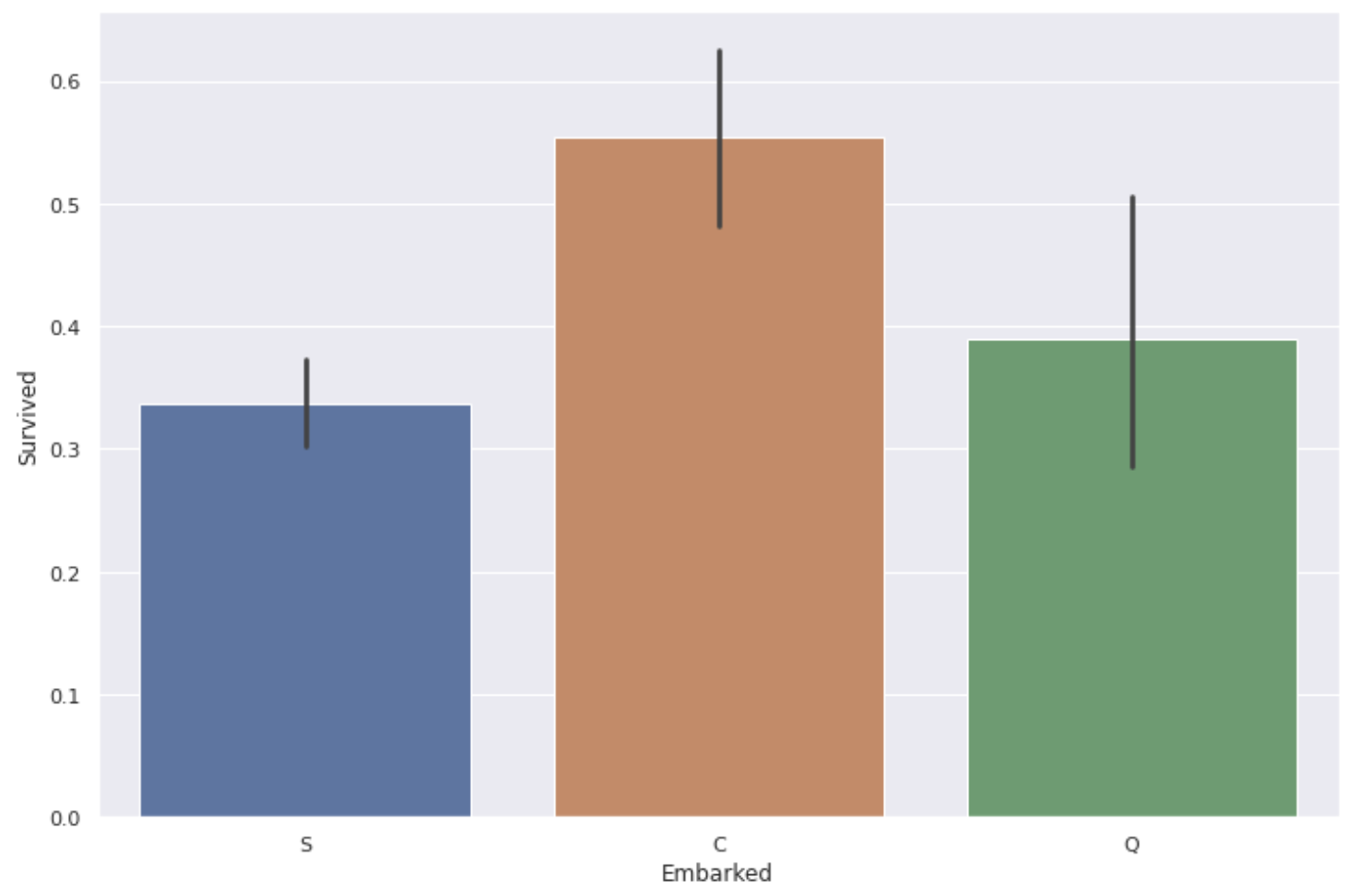 ** The survival rate of people boarding from the port of C (Cherbourg) is a little high **.

It is unlikely that the port itself has an effect, so let's take a look at the Pclass and Fare for each type of port. 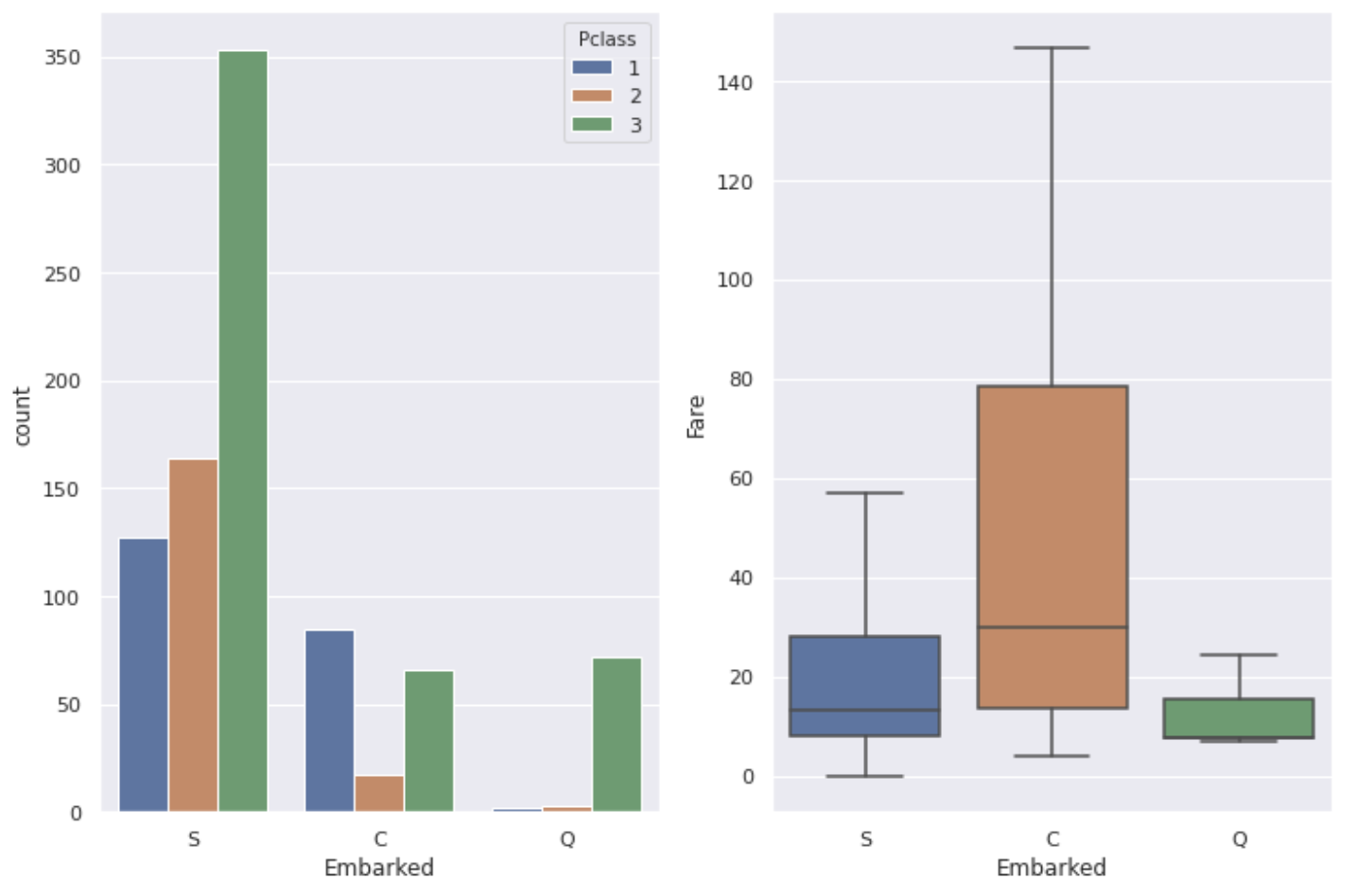 Looking at the whole, it seems that there are quite a lot of people who got on from the port of S (Southampton). It can be said that the high survival rate at C's port is due to the high proportion of ** P class: 1 people and the relatively high Fare.

A drawing of the Titanic ship was on this site. Plans détaillés du Titanic 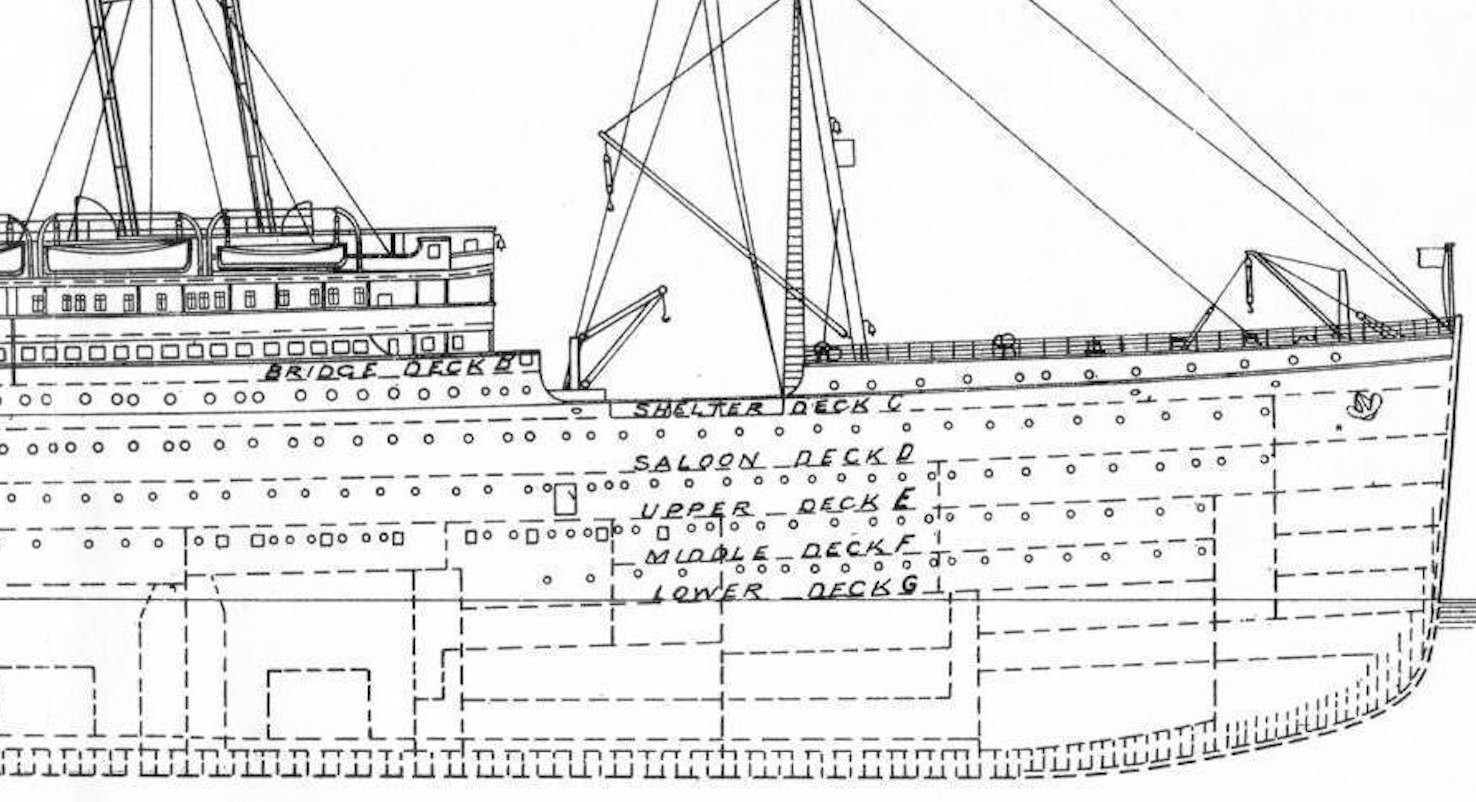 The guest rooms are written as "B96", and the first alphabet indicates the hierarchy of the guest rooms. There are A to G and T alphabets, A is the top floor of the ship (luxury room) and G is the bottom floor (ordinary room). ** Considering that the lifeboat is placed on the upper deck ** and ** the inundation of the ship starts from the bottom **, the survival rate of the person in the room A closest to the upper deck is Looks expensive **. Let's see what happens with the actual data. 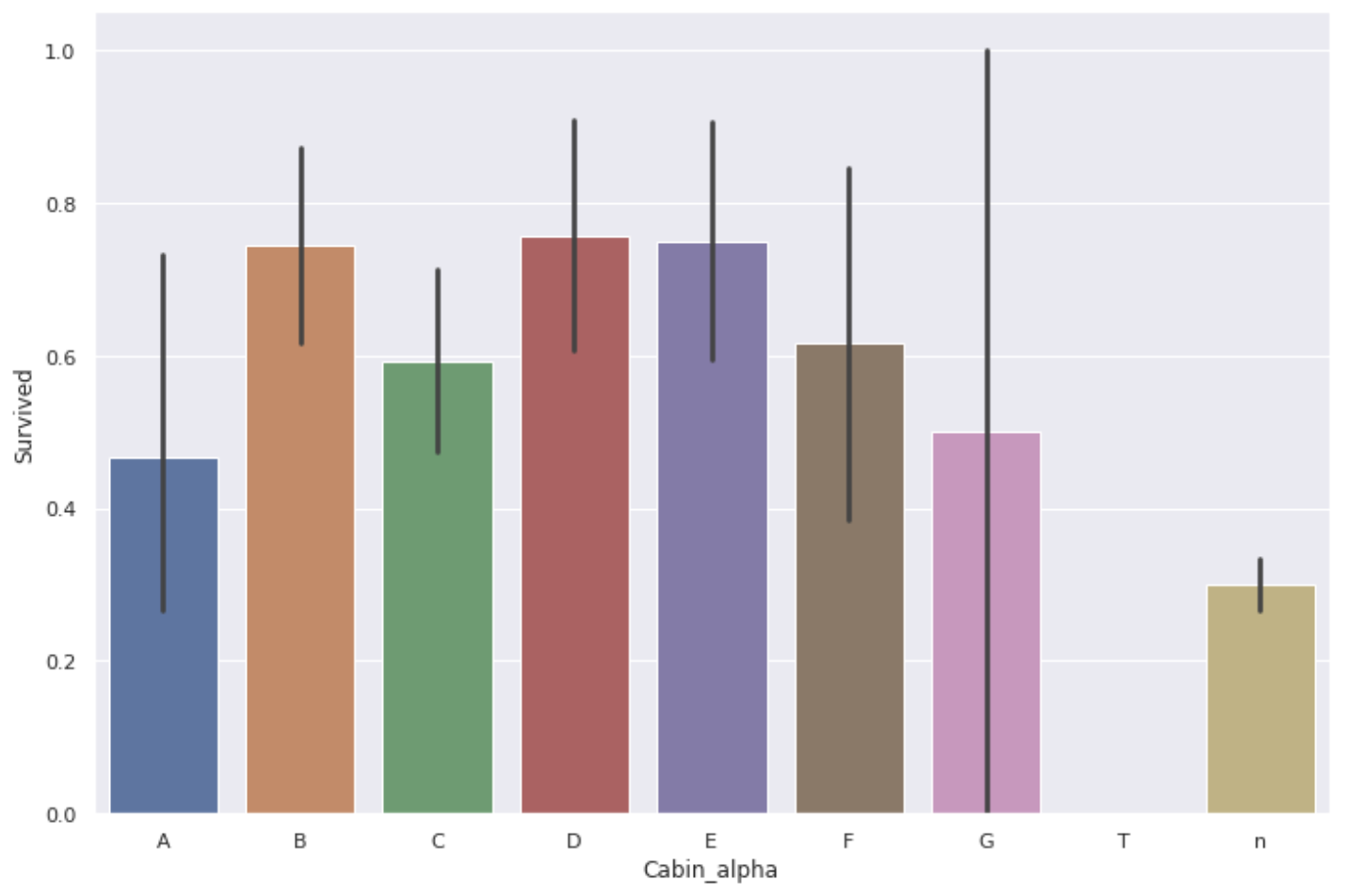 Contrary to expectations, the survival rate in A's room was not very high. The table below shows the total number of data.

Also, as with the ticket, there was a person with the same room number, so I thought "the room is the same" → "boarding with friends and family" → "the survival rate will be different", depending on whether the room numbers are duplicated The survival rate of each was calculated.

When I saw it, the survival rate of the person who was in the room alone was a little low ... I couldn't get it. After all, the number of data is too small to get a clear result.

On the contrary, the Cabin column may be cut off if it interferes with prediction or causes overfitting.

This time, I tried to analyze the data mainly on the relationship with Survived in order to find the data that can be used as the feature quantity given to the prediction model. We found that the features that seemed to be significantly related to survival rate were ** P class, Fare, number of family members (Family_size), duplicate tickets (Ticket_count), gender, and age **.

Next time, I would like to make up for the missing values contained in the train data and test data and complete the data frame given to the prediction model.

If you have any opinions or suggestions, we would appreciate it if you could comment.