[PYTHON] 10 Most Popular Programming Languages in 2020

For beginners in programming, choosing a language with a better perspective is very important. The text introduces the ten most popular programming languages in 2020.

First, let's take a look at the TIOBE ranking. It is a very authoritative ranking. The next 14 are long-lived, so you can see that all nine other programming languages exist and dominate the list for a long time, except that SQL has been replaced by GO. Let's introduce them one by one. 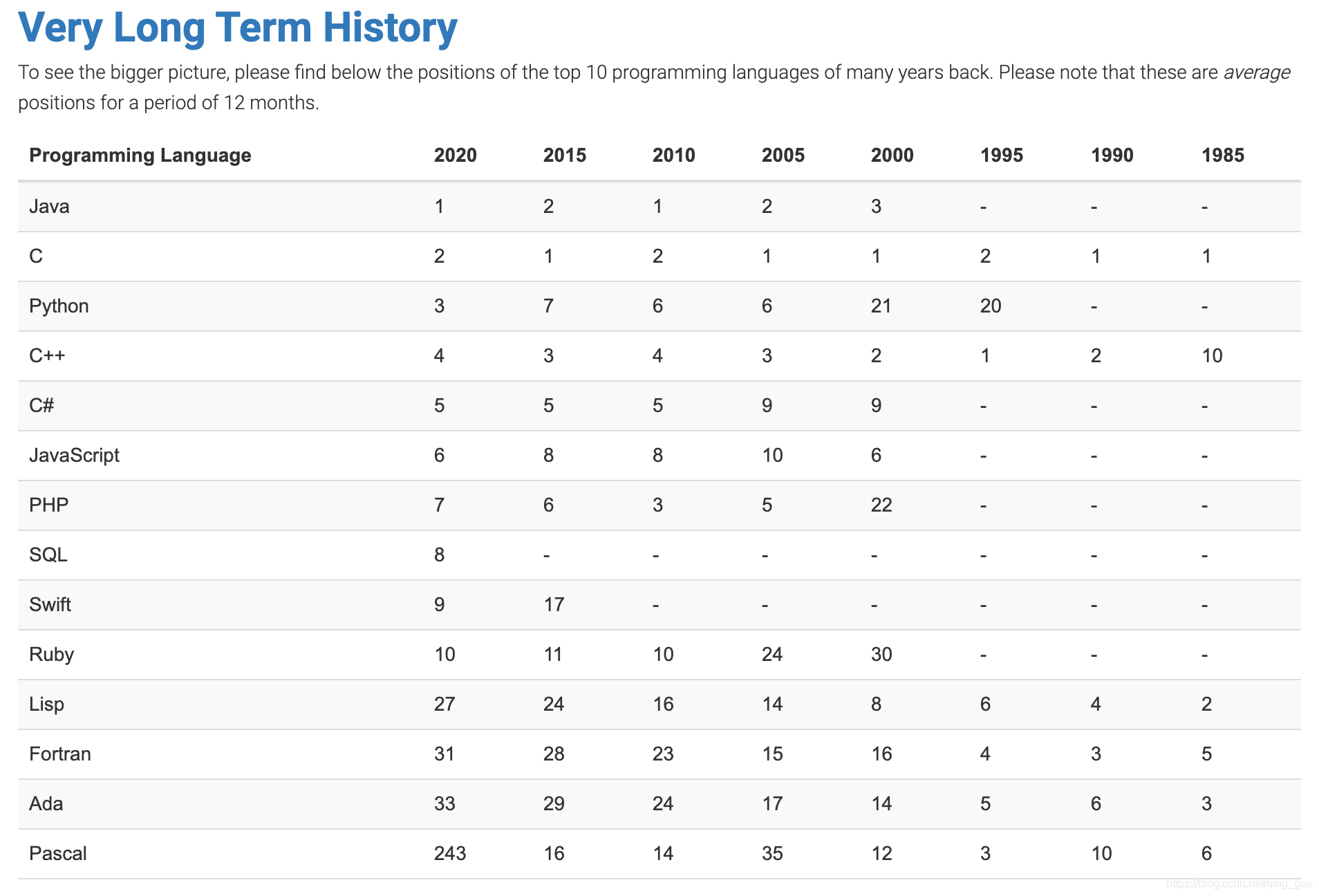 1.Java Java is actually an alternative to C ++. Initially, Sun wanted to develop an object-oriented programming language that was easier than C ++. Over time, Java has become much more popular than C ++ as it becomes easier to learn and cross-platform. With the help of the Java Virtual Machine, Java is very popular in enterprise-level development because it is freely available on a variety of operating systems such as Linux, Windows, and Mac-OS. 2.C++ As the name implies, C ++ is a C language extension aimed at creating object-oriented functions in C language. C ++ can run on all platforms and effectively utilize all types of hardware for best performance on resource-constrained platforms. 3.C C language is a general-purpose programming language developed mainly by Dennis Ritchie of AT & T Bell Labs in 1972. It aims to make effective use of system resources. At that time, every byte of memory was expensive. Although the C language was born very early, it remains one of the most commonly used programming languages. Like C ++, C can directly access memory to control hardware. C is closely related to the operating system and is difficult to figure out because the programmer has to handle the memory allocation details. 4.Python All programmers prefer Python because the cost of learning is so low, but today's very high levels of applications such as artificial intelligence, machine learning, and data analytics are very high. The Python syntax is simple and elegant, and the community is very active. But one thing to say is that the Python position requires a high degree of education. 5.JavaScript JavaScript is a high-end dynamink programming language. The very popular front-end framework Vue.js was written in js JavaScript. If you want to get involved in front-end development, JavaScript is a must. 6.C# Initially, C # was considered a copy of Java, but they have significant similarities, have almost the same syntax as Java, and must be compiled and executed. With time development and a great deal of effort by Microsoft, C # has accumulated a wealth of class libraries and frameworks that allow developers to quickly create a variety of applications based on the .NET platform. 7.Swift Swift is a powerful and intuitive programming language created by Apple that you can use to develop apps for iOS, Mac, Apple TV, and Apple Watch. It aims to give developers complete freedom. Swift is easy to use and open source, and anyone with an idea can create great things. 8.Go The Go language design is very sophisticated, very easy to use, and very good at solving developments and extensions. The important thing is that it's very easy to learn and these benefits contribute to the rapid growth of the Go language. Google, AWS, Cloudflare, CoreOS and others are all starting to use Golang on a large scale to develop cloud computing products. The future is very bright. 9.PHP PHP has a history of more than 35 years developing web applications. PHP has always been the king of web development. In particular, the popularity of content management platforms such as WordPress and the support of Facebook (developed by PHP) have strengthened PHP's position in the industry. 10.Ruby Originally a scripting programming language for objects, Ruby has gradually evolved into a high-level general-purpose programming language that has been interpreted over time. It is very helpful in increasing the productivity of developers. In Silicon Valley, Ruby is very popular and is known as the web programming language of the cloud computing era.