This article is a rewrite of Calculate Cumulative Distribution Function by Sorting written in Ruby in Python.

When you want to know the probability density function (PDF) of a random variable, you use a histogram for naive, but it takes trial and error to cut bins, and it takes a considerable number of measurements to get a clean graph. It is troublesome to become. In such a case, it is cleaner to look at the cumulative distribution function (CDF) instead of the probability density function, and it is easier to find it with a single sort. Below, we will introduce the differences between random numbers that follow a normal distribution when viewed in PDF and when viewed in CDF. The operation was confirmed by Google Colab.

Get the probability density function in the histogram

First, let's see how to obtain the probability density function from the histogram. Import all the libraries you will need later.

Generate 1000 random numbers that follow a Gaussian distribution with mean 1 and variance 1. 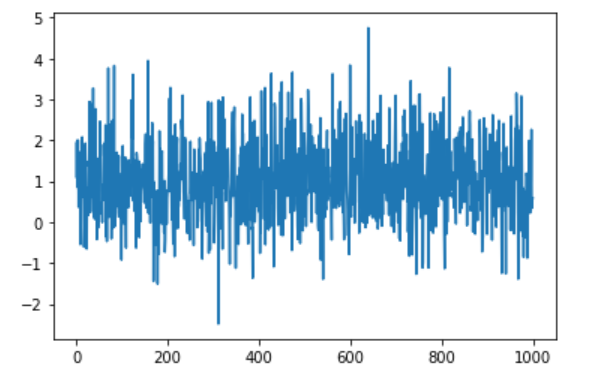 Let's make a histogram and find the probability density function. You can also find it with matplotlib.pyplot.hist, but I use numpy.histogram as a hobby of how to receive values. 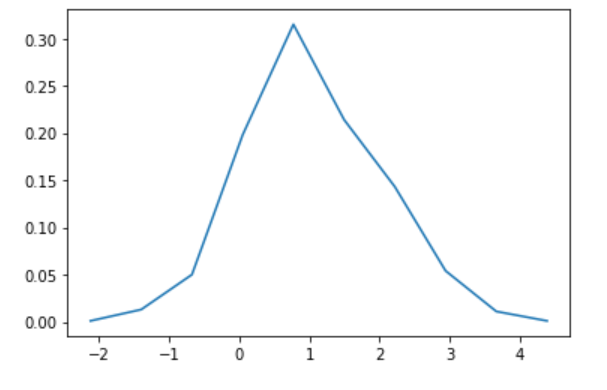 It looks like a Gaussian distribution, but it's pretty crazy.

Now, let's assume that this histogram has a Gaussian distribution and find the mean and standard deviation. Use scipy.optimize.curve_fit.

Note that you must use np.exp instead of ʻexp as the NumPy array is passed to x. If you pass this function and data to scipy.optimize.curve_fit`, it will return an array of estimates and a covariance matrix, so let's display it.

Since the diagonal component of the covariance matrix is variance, its square root is displayed as an error. The result is different every time, but it looks like this, for example.

Get the cumulative distribution function by sorting

The cumulative distribution function $ F (x) $ is the probability that the value of a random variable $ X $ is smaller than $ x $, that is,

Is. Now, suppose that when $ N $ of independent data is obtained, the $ k $ th value is $ x $ by arranging them in ascending order. Then, the probability that the random variable $ X $ is smaller than $ x $ can be estimated as $ k / N $. From the above, the cumulative distribution function can be obtained by sorting the obtained array of $ N $ random variables and plotting the $ k $ th data on the x-axis and $ k / N $ on the y-axis. let's see. 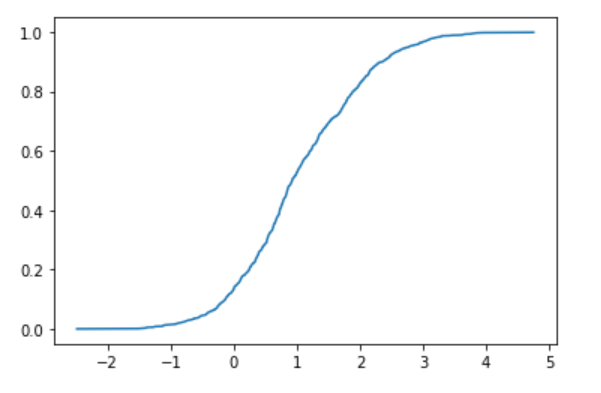 Find the cumulative distribution function by sorting (Python version)
Find the maximum Python
Find the difference in Python
About the enumerate function (python)
Find the maximum python (improved)
[Python3] Call by dynamically specifying the keyword argument of the function
Find the diameter of the graph by breadth-first search (Python memory)
Graph the Poisson distribution and the Poisson cumulative distribution in Python and Java, respectively.
How to find the cumulative sum / sum for each group using DataFrame in Spark [Python version]
[Python] Find the second smallest value.
Try transcribing the probability mass function of the binomial distribution in Python
pyenv-change the python version of virtualenv
How to get the Python version
Find the Levenshtein Distance with python
Change the Python version of Homebrew
[Python] Make the function a lambda function
[Python] A simple function to find the center coordinates of a circle
Sorting files by Python naming convention
Download the file by specifying the download destination with Python & Selemiun & Chrome (Windows version)
Find the minimum value of a function by particle swarm optimization (PSO)
[Python] Note: A self-made function that finds the area of the normal distribution
Find the maximum value python (fixed ver)
[Python] Visualize the information acquired by Wireshark
About the virtual environment of python version 3.7
OR the List in Python (zip function)
[Python3] Rewrite the code object of the function
Install by specifying the version with pip
Function to save images by date [python3]
[Python] Try pydash of the Python version of lodash
Read the file line by line in Python
Read the file line by line in Python
Migemo version of the: find command,: mfind
Pandas of the beginner, by the beginner, for the beginner [Python]
python function ①
[Circuit x Python] How to find the transfer function of a circuit using Lcapy
[Python] function
[Scientific / technical calculation by Python] Numerical calculation to find the value of derivative (differential)
[Scientific / technical calculation by Python] Analytical solution to find the solution of equation sympy
Test whether the observed data follow the Poisson distribution (Test of the goodness of fit of the Poisson distribution by Python)
python function ②
Try the python version of emacs-org parser orgparse
[Python] I tried substituting the function name for the function name
The first web app created by Python beginners
Find the mood value with python (Rike Koi)
Defeat the probability density function of the normal distribution
Get the caller of a function in Python
Match the distribution of each group in Python
[Python] Sort the table by sort_values (pandas DataFrame)
A note about the python version of python virtualenv
Find the divisor of the value entered in python
Try the free version of Progate [Python I]
How to erase the characters output by Python
I tried using the Datetime module by Python
Find the solution of the nth-order equation in python
I implemented the inverse gamma function in python
Find the geometric mean of n! Using Python
[Introduction to Algorithm] Find the shortest path [Python3]
[Python] Find the transposed matrix in a comprehension
Find the shortest path with the Python Dijkstra's algorithm
python xlwings: Find the cell in the last row
Add a function to tell the weather of today to slack bot (made by python)