[LINUX] I want to do Wake On LAN fully automatically

This article is the 7th day article of KLab Engineer Advent Calendar 2019. I was late when I was having trouble debugging ...

The topic of systemd, TCP proxies and Wake On LAN.

I'm a Mac user, but sometimes I use my Windows machine at home via Remote Desktop.

This Windows machine is usually put to sleep, so if you want to use it, you must first throw a Wake On LAN magic packet to wake it up [^ 1].

[^ 1]: It's a remote desktop dedicated machine and it's out of reach because it's not normally used.

However, it is not uncommon to forget the MAC address of a Windows machine or forget the command to throw a magic packet in the first place.

Of course, the commands I used before are recorded in the history, so I can manage it, but in the first place, it seems to be troublesome to manually throw magic packets every time.

So, I configured a TCP proxy with systemd and created a mechanism to automatically throw magic packets before connecting to the proxy. I have a Raspberry Pi that is always running in my house, so I decided to operate a TCP proxy here. 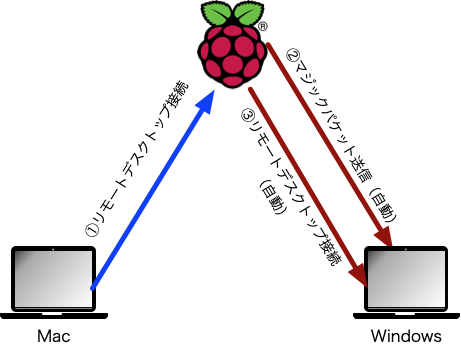 This eliminates the hassle of throwing magic packets on your Mac, and allows you to log on to Windows simply by selecting the connection destination from the GUI of the remote desktop.

This article will introduce the details of this mechanism. Since there is no protocol-dependent part, it should be possible to use it other than remote desktop.

Throw a magic packet from systemd

First, I will introduce the process of throwing a magic packet. This was written in the oneshot service template.

Next, we will create a TCP proxy with systemd. This is a 2-file structure.

After installing the above file, enable automatic startup.

By setting ListenStream =, it listens on TCP 3389 and passes it to the service [^ 2]. Also, if ʻAccept = yes`, you need to create a service template with the same name.

The main process is proxying using netcat. One process will be started for each connection.

However, simply proxying with netcat did not work as expected. Because there is a time lag between throwing the magic packet and the remote desktop server going into the listen state, you have to wait for a while before you can connect. Therefore, before connecting, I used ʻExecStartPre` to check if TCP connection was possible, and proxyed after it became possible to connect.

The IP address and MAC address are for example only, so change them as appropriate when using the above settings.

When I actually used it, it was more practical than I expected. I'm using Raspberry Pi 2 as a proxy, but there seems to be no performance problem (because I had enough CPU load and network bandwidth as far as I experimented).

By the way, in my environment, there is a time lag of about 30 seconds from connecting to the proxy to connecting to the sleeping Windows by remote desktop. It's not unbearable, but I think it's too late, so there may be some improvements.

I made a TCP proxy with systemd and showed that any external command can be executed before its connection. This time, I threw a Wake On LAN magic packet with an external command, but it seems that it can also be applied such as connecting after launching an AWS instance.

Anyway, systemd can do anything ...