What is data parallelism?

--Model parallelism: One huge operation for 1000 data is shared by 100 people --Data parallelism: Divide 10 pieces of data per person and share it with 100 people

Of course, model parallelism depends on the model, so it can be said that it is more versatile to reduce the data handled at one time in data parallelism.

In data parallelism in training, multiple copies of models with the same parameters are made, batches are subdivided and passed to each copy of the model, and each is made to calculate the derivative. In other words, it is necessary to have a model with the same parameters for each device, but the handling around that is a little difficult to understand. I will not use GPU this time, but for calculation and parameter sharing on multiple devices, the official How To description around GPU (Using GPUs .7 / how_tos / using_gpu / index.html # using-gpus), Sharing Variables) Will be helpful.

Use Collections to refer to the graph later.

In Distrubuted Tensorflow White Paper, the server that manages Variable, which is a parameter device, manages and updates parameters, and the master works for each worker. There is a description about throwing (sorry, I haven't read it properly ...). While reading diagonally around that, I decided to manage Variables collectively with master, and make it a configuration that two workers handle the subdivided batches. It is possible to separate the server (ps) for parameters separately, but this time it will be included in master.

I will describe it in the division. The figure is as follows. 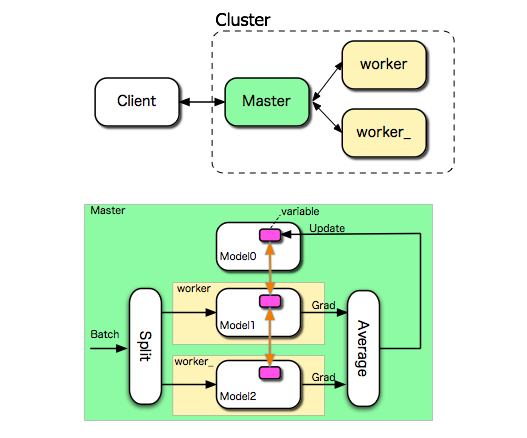 Start the grpc server. The cluster configuration is one master and two workers, so

Last time Let's learn the approximation of $ y = e ^ x $ in parallel data. See here for the code. By the way, I also put a single CPU version and a model parallel version in the same place.

To share parameters with master and worker, just specify the device and scope and replace the variable creation part created by tf.Variable () with get_variable (). I want to reuse it, so I will unify everything with the ps scope. It seems to pass an initializer to initialize the variable.

If you call it with the reuse flag set in the same scope, it will be reused. I'm a little confused here, but since the scope here is a variable scope, only variables are reused, and the graph is a separate instance.

We will pass the batch to each worker later in the main loop, but we will use a collection so that we can identify which worker's placefolder at that time.

Follow the procedure. The place to average the differentiation is diverted from TensorFlow sample code.

Let's compare the degree of convergence. 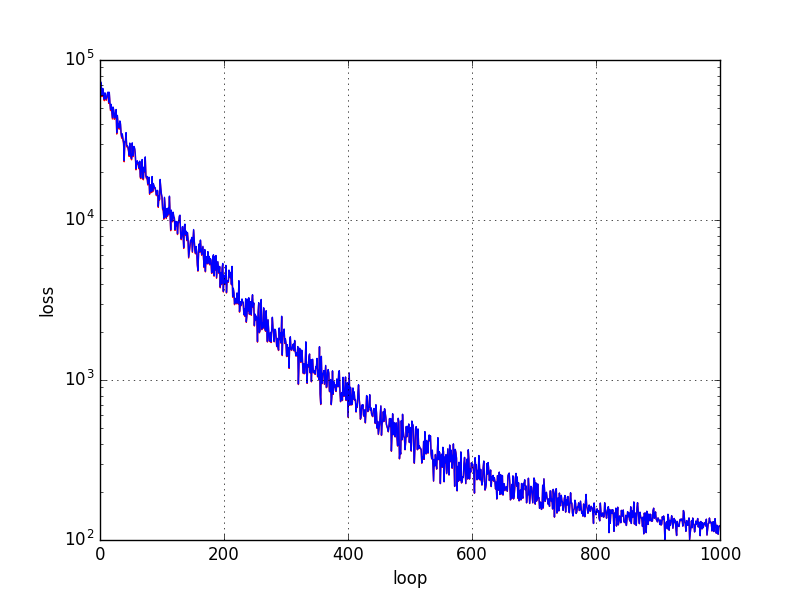 Blue is the single CPU version and red is the data parallel version. Since the seeds of random numbers are aligned, they almost overlap. (Not exactly the same value)

I haven't increased the number of server machines, the overheads are huge, the batch operation is not heavy in the first place, etc. There are various disadvantages in this example, so the parallel version is slower. It was roughly twice as slow at hand.

Up to this point, the purpose is to understand the mechanism rather than speeding up, so every time I get the result of slowing down with parallelization, Next time is finally about this. Let's make it a Docker container and run it on Google Clout Platform. If you make a lot of containers with the momentum to use up the free frame of \ $ 300, it should be faster. The hot topic AlphaGo is said to have 1200 CPUs, but I'm looking forward to seeing how much it can do for \ $ 300.