Hannari Python At the LT meeting in December, I made a presentation on "Python and Bayesian statistics".

This article is the 24th day article of Hannari Python Advent Calendar 2020 --Qiita. The day before, @ masayuki14 said, "I started Kaggle, so I'll do it little by little so that I can compete in the competition a year later." Nice to meet you, I'm Watanabe, @HW_a_pythonista, who is active on Twitter id. I am a regular of Hannari Python and made a presentation on Python and Bayesian statistics at the Hannari Python LT meeting in December, so I would like to summarize what kind of announcement I made on this page. (The above announcement is a reduction of what was announced at Pycon mini Hiroshima 2020 and includes some information updates.)

What are Bayesian statistics?

Bayesian statistics is a statistic that reflects the observation data actually obtained from your prior probability (predicted probability) that you have before making an observation, and makes the best guess at that time. It is the method of. As for the method of machine learning, Bayesian statistics and Bayesian modeling are some kind of intermediates between the models with few parameters that are often used in statistics and the machine learning models that require tuning including many hyperparameters. You may think that. (In a rough way, I think there is a bad word)

To explain why Bayes is, I would like to first look back on the recent situation surrounding AI and Python. The recent boom in AI and machine learning has been driven by methods such as deep neural networks that use large amounts of data. Here, Python has attracted attention and has become very popular. Python came into the limelight as deep learning libraries such as TensorFlow, Chainer, PyTorch, Theano, and MXnet were all recommended to be used from Python. In addition, the library of machine learning, such as Scikit-Learn and Numpy, which is not limited to deep learning, and the library of numerical calculation, which is the basis of it, also supported the popularity. Recently, parameter tuning called AutoTuner has been developed automatically, and at PyconJP2020, MLOps and the response speed of machine learning web applications were announced. Should data scientists and machine learning engineers only consider these issues in the future?

Problems when using machine learning in the field

Those that have already been used a lot 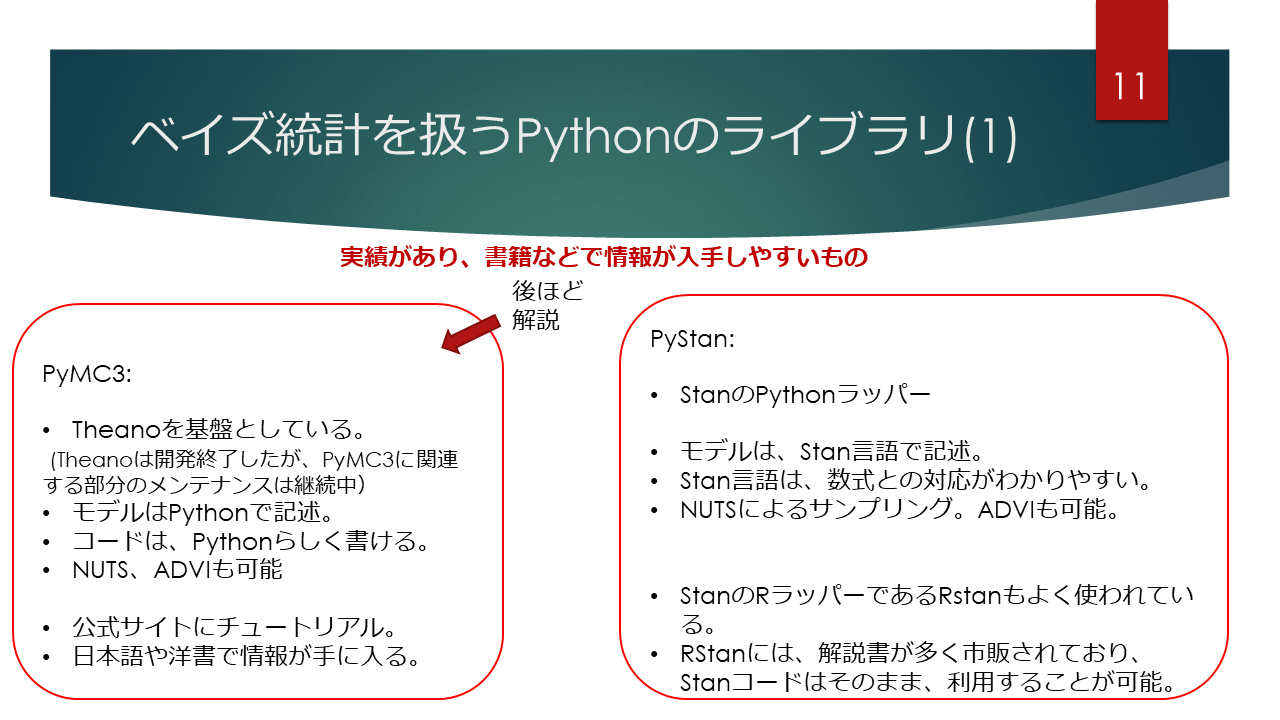 In the future, I would like to write a library of Bayesian statistics that can be used from Python. The ones listed here are expected to handle large computational learning models to some extent. (I think that GPU speedup is also expected.) 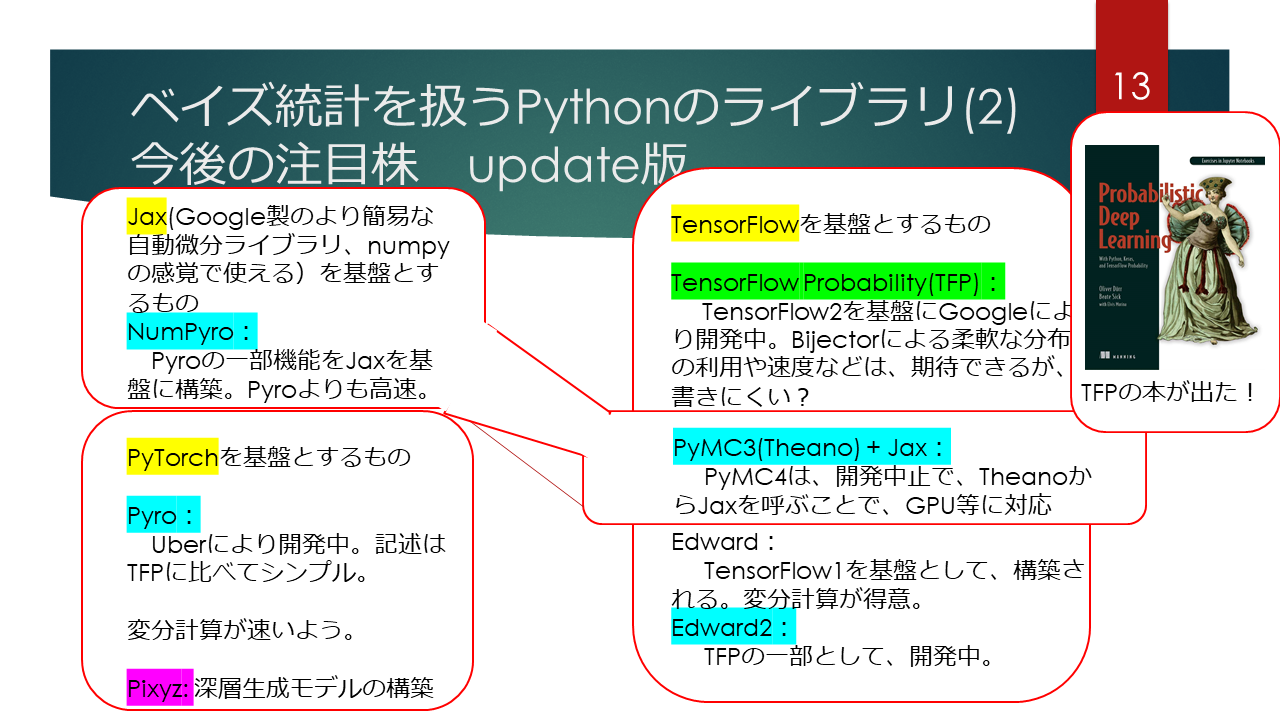 Hannari Python At the LT meeting in December, I made a presentation on "Python and Bayesian statistics".
I made a program to check the size of a file in Python
I made a POST script to create an issue on Github and register it in the Project
[Python] I analyzed the diary of a first-year member of society and made a positive / negative judgment on the life of a member of society.
I wrote a class in Python3 and Java
I made a Caesar cryptographic program in Python.
I made a familiar function that can be used in statistics with Python
I gave a poster presentation at the 36th Joint Conference on Medical Informatics.
I made a prime number generation program in Python
[Example of Python improvement] I learned the basics of Python on a free site in 2 weeks.
A note on the library implementation that explores hyperparameters using Bayesian optimization in Python
I made a Python3 environment on Ubuntu with direnv.
I compared the speed of the reference of the python in list and the reference of the dictionary comprehension made from the in list.
I made a LINE BOT with Python and Heroku
Write a log-scale histogram on the x-axis in python
I made a prime number generation program in Python 2
I made a class to get the analysis result by MeCab in ndarray with python
I made a program to collect images in tweets that I liked on twitter with Python
I also tried to imitate the function monad and State monad with a generator in Python
I made a simple typing game with tkinter in Python
I made a quick feed reader using feedparser in Python
I tried programming the chi-square test in Python and Java.
I made a VGG16 model using TensorFlow (on the way)
I created a class in Python and tried duck typing
I made a puzzle game (like) with Tkinter in Python
I made a Chatbot using LINE Messaging API and Python
I made a python text
I tried to find out the difference between A + = B and A = A + B in Python, so make a note
I made a simple circuit with Python (AND, OR, NOR, etc.)
[Python3] I made a decorator that declares undefined functions and methods.
I made a Nyanko tweet form with Python, Flask and Heroku
I made a scaffolding tool for the Python web framework Bottle
I made a command to display a colorful calendar in the terminal
Take a look at the built-in exception tree structure in Python 3.8.2
I made a Chatbot using LINE Messaging API and Python (2) ~ Server ~
Get the number of readers of a treatise on Mendeley in Python
I made a Line-bot using Python!
[Python] I made a bot that tells me the current temperature when I enter a place name on LINE
I made a fortune with Python.
I wrote the queue in Python
I made a daemon with Python
Schedule a Zoom meeting in Python
[Python] How to save the installed package and install it in a new environment at once Mac environment
I wrote the stack in Python
I made a web application in Python that converts Markdown to HTML
I made a kitchen timer to be displayed on the status bar!
I made a Discord bot in Python that translates when it reacts
I set the environment variable with Docker and displayed it in Python
The file name was bad in Python and I was addicted to import
Deploy and use the prediction model created in Python on SQL Server
I made a script in python to convert .md files to Scrapbox format
[Python, ObsPy] I drew a beach ball on the map with Cartopy + ObsPy.
A memorandum because I stumbled on trying to use MeCab in Python
[IOS] I made a widget that displays Qiita trends in Pythonista3. [Python]
Get a datetime instance at any time of the day in Python
I made a mistake in fetching the hierarchy with MultiIndex of pandas
[At Coder] What I did to reach the green rank in Python
I made a function to see the movement of a two-dimensional array (Python)
[Python] I made a web scraping code that automatically acquires the news title and URL of Nikkei Inc.
I made a program in Python that reads CSV data of FX and creates a large amount of chart images
[Python] I made a script that automatically cuts and pastes files on a local PC to an external SSD.