python beginners tried to predict the number of criminals

First of all, let me briefly introduce myself. I studied engineering (chemistry) at university and have been working as a researcher at a general company for the fifth year. I received half a year of childcare leave from the company this time, so I decided to study programming during the childcare period. It was my motivation to get started, but I saw many videos on YouTube such as "Recently, you can easily learn programming". Coupled with the fact that I had touched it a little when I was in college, I decided to take the plunge and go to online school for three months.

** Overview of this article **

-** What kind of person is the article for ** Completely for beginners. I want people who want to start programming now to read it. I write from how I chose an online school and what I learned.

-** Challenged in this article ** Among the techniques I learned during the three-month course, I decided on my own subject and moved the code that I found interesting. Specifically, I tried to predict the number of criminals by month. At first, I tried to predict with the LSTM model, but the accuracy was not good, so I tried to predict using machine learning.

-** Why did you choose Aidemy ** There were many options when choosing an online school. I went to see each website, but decided on Aidemy, which had the fewest advertisements from the business, such as the success rate of changing jobs. Rather than hone your skills for changing jobs this time, what is purely trendy opportunity learning and deficiency planning? As a result, this choice was good. Also, it was great that the representative appeared on the Horiemon channel and that Mr. Takumi of Yobinori recommended it.

-** What I learned at Aidemy ** I was in a data analysis course Since I chose the Premium Plan, I was able to learn the teaching materials of other courses with + α. I was able to study extensively and was very satisfied. Let me briefly describe what I learned. (1) Numpy, Pandas, Matplotlib, data cleansing, data handling (2) Supervised learning, unsupervised learning (3) Time series analysis, stock price forecast, kaggle competition (Titanic, house price forecast) (4) Natural language processing, topic extraction, sentiment analysis (5) Deep learning image recognition

** [Main subject] Prediction of the number of criminals **

** ● Number of criminals ** Now the main subject. This time I decided to predict the number of criminals by month. First, make a prediction using the LSTM model. The data used was pulled from a page that manages government statistics called e-Stat. We will deal with the number of "Persons handling alleged cases by offense (January 2007-January 2018)".

** ● Reading data and removing indexes and columns ** The data used is the first column of the first Sheet. In addition, the value of the extracted data is converted to a float type and read in order to be suitable for analysis by LSTM.

** ● Creation of training data and test data ** Divide the first two-thirds for training and the remaining one-third for testing. There are 89 train data and 44 test data.

** ● Data scaling ** Scaling is performed in preprocessing. Here, normalization (MinMaxScaler) was used to perform scaling based on the training data.

** ● Construction and training of LSTM network ** Next, we will build an LSTM network and train the model using the prepared data.

** ● Data prediction / evaluation ** Now that the model has been built and trained, it is time to predict and evaluate the data. In order to correctly evaluate the prediction result of the output data, it is necessary to restore the scaled data. To restore it, use the inverse_transform () method, which performs the inverse transformation of the transform () method. The error is large probably because there is little data. 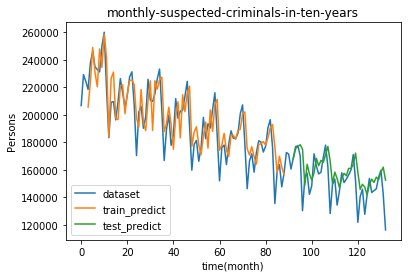 The 0 on the X-axis is January 2007. Surprisingly, the number of criminals is decreasing. Let's expand the part of the test data. 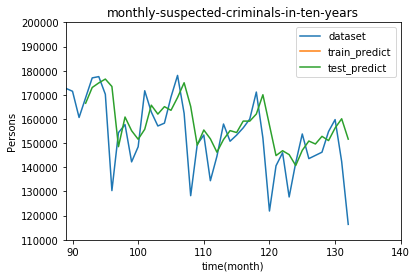 Well, probably because there is little data, errors are noticeable in some places.

** I tried to predict by machine learning **

Using these, we performed multiple regression analysis as follows.

It's a decent result. I am satisfied for the time being.

The course period has ended, but I will continue to find time to study little by little. It was good to be able to touch a wide range while actually executing the code by the time I graduated.