[LINUX] Snow on your Mac the old-fashioned way

It is Christmas soon. So I'm going to snow (or penguins) on my Mac. (I couldn't think of much to write, so I decided to make the tea muddy.)

Those who have no idea what the title is. If you can predict what it is, you probably agree with it, so you don't have to read it.

Do the following: (It is assumed that the OS is macOS Mojave, Homebrew and Docker are installed, and Docker is running.)

Installation and configuration of XQuartz

Open a terminal and do the following:

If all goes well, an application called XQuartz will start, so change the settings.

Now that the preparation is complete, let's run it. In the terminal do the following:

After doing the above, wait a few minutes.

If all goes well, the screens will switch and it should snow. Congratulations. (By the way, if you wait for a while, snow will pile up and the wind will blow, so it may be good to watch it.)

If the screen doesn't switch, press Command + tab several times to switch to XQuartz. If the screen still does not change, select the following from the menu.

Select the following from the menu to cancel full screen. (The menu is displayed when you move the mouse cursor to the top of the screen.) (Sometimes XQuartz itself may crash, but I want to quit it so I think it's okay to ignore it.) Then type Ctrl-c in the terminal to quit.

If you want to run it again, do the following in your terminal:

It's not good that there is no explanation, so I will explain how it works a little. 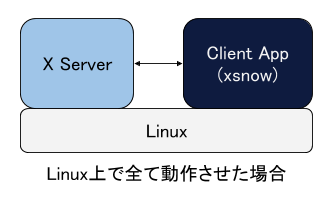 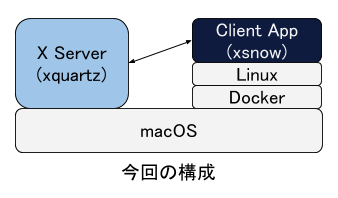 The "Client App" in the figure can be anything, for example Firefox or Emacs can work as well. In the case of these applications, unlike xsnow that I moved this time, it operates in a separate window, so it is not necessary to set the full screen mode set in the "Output" tab of XQuartz. By doing so, you can view and operate applications running on Linux on the same screen as other Mac applications (Finder etc.) running directly on the Mac, making it more like running on the Mac. I can see it.