[PYTHON] I tried to solve the inverted pendulum problem (Cart Pole) by Q-learning.

I wrote Article about Q-learning before. As a concrete example, I introduced the two-bowl bandit problem, but since it does not evolve in time (the state does not change), I will introduce the inverted pendulum problem, which is a problem with time evolution. You don't need to read it as it is independent of the previous article. The code was written in Python 3.8.6.

First, the ε-greedy method will be explained. Since the Q value is randomly generated in the initial stage of learning, it may not be possible to learn well because only fixed actions that depend on the initial value are performed (a large value with a Q value is generated, and the fixed action at that point. Not etc.). The ε-greedy method is one of the methods for solving the above problems. Specifically, a random action is selected with a probability ε, and an action with the maximum Q value is selected with a probability $ (1- \ epsilon) $. There is a trade-off between taking a random action and taking an action that maximizes the Q value, and as the number of random actions increases, learning does not proceed well and the Q value becomes maximum. If the number of such actions increases, a wide range of searches will not be possible. Ideally, in the first half of learning, many random actions should be taken to search for a lot, and in the end of learning, many actions should be taken to maximize the Q value to increase utilization. Therefore, it is possible to learn more efficiently by reducing the value of ε as the learning progresses.

CartPole CartPole is one of the game environments provided by OpenAI Gym and is a game related to Inverted Pendulum. The inverted pendulum problem is a problem in which a rod having a fixed rotation axis is erected on a trolley and the trolley is moved left and right to control the rod so that it does not fall. The state of Cart Pole is as follows.

After installation, run the following code to see if it works.

In my case (Mac OS Big Sur ver11.1) ImportEroor occurred, but I could solve it by installing the following library.

Create a Q table (a table in which Q values ​​corresponding to each state and each action are written) so that the stick does not fall during Q learning. Implementation is divided into main, agent, environment, and state (brain).

The initial value of the Q table is randomly generated from -1 to 1 (0 to 1 is also acceptable). The processing related to discretization is performed according to the conditions of the carriage and the rod. Adopt the ε-greedy method introduced earlier so that ε becomes smaller as learning progresses.

In the code related to the agent, the code in the previous state is called to update the Q table and select the action.

In the code related to the environment, learning is performed by calling the code of the agent by adding new processing related to drawing for each episode, such as the condition of learning completion, the play video of the model finally created, and the reward. The number of trials was set to 1000, but if learning is not completed, it is better to increase the number of trials.

Call the environment code to learn.

Finally, I was able to control the CartPole as follows.

The rewards changed as follows. 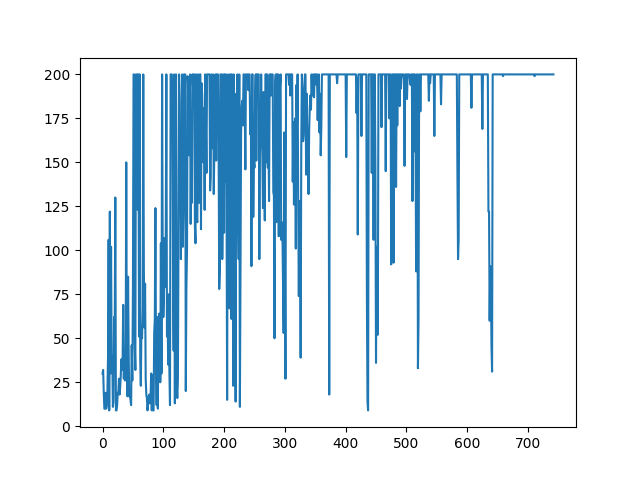 In this code, learning is stopped when learning is completed, but if you continue without stopping, the reward will be as follows. 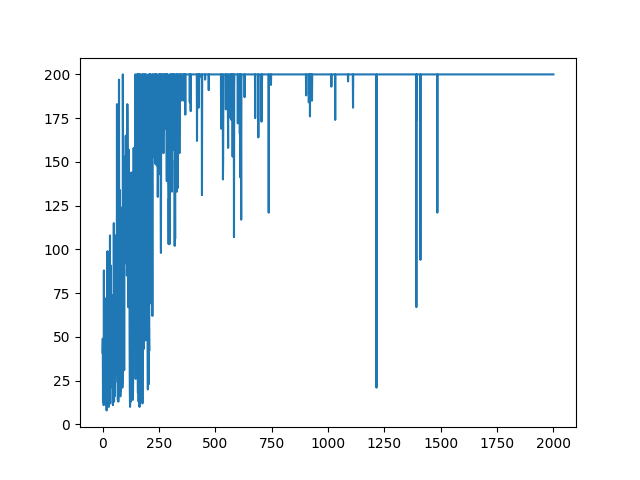 It turns out that it sometimes fails over time. Next, let's look at the average reward and its variability (standard deviation) for the last 100 episodes. 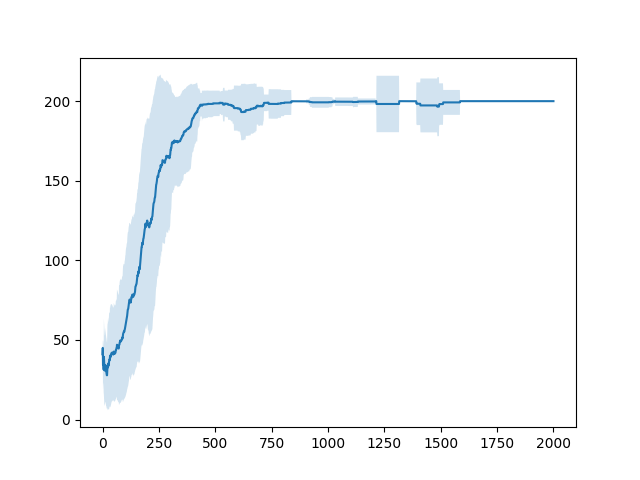 It turns out that this is more intuitive to judge whether or not learning is possible.