[Must-see for beginners] Basics of Linux

Contents of this article and target audience

In this article, I will write the basic knowledge for those who are starting programming on Linux to see other articles on the net and proceed with self-learning. Write on the assumption that you know the basic knowledge of computers. For those who are not familiar with the command line, here is a guide that you can remember this so that you will not have any trouble searching on the net.

It is the environment construction of the first barrier. Many beginners stumble. Basically, let's create an environment that boots with dual boot. "Ubuntu" is recommended as the OS when creating a Linux environment. When creating an environment, it is recommended to install it directly on the SSD without using a virtual environment such as Virtualbox. That's because you'll be bothered by the problems specific to that virtual environment. Please do it after getting used to it to some extent. Lenovo Thinkpad series and ASUS Zenbook series are recommended as the hardware environment. (Comment if there is another PC that can be done smoothly without problems) Single board computers such as Jetson and Raspberry pi will be troubled by unique environmental problems different from Ubuntu and will consume time, so study basic knowledge If your goal is to use an ordinary PC.

Unix is an old operating system, and its descendants are still in use today. Linux is currently the most widely used Unix-like operating system based on the Unix kernel. By the way, MacOS is also a direct line of Unix, so you can use Unix commands as they are.

-Ubuntu ... A popular OS for students and the general public. It is possible to operate lightly even on a machine with low specifications. This article assumes this distribution environment. ・ Redhat Enterprise ... Linux for enterprises ・ Debian ... For those who want to play with various things independently ・ Mint ... For weak computers

The command line can seem daunting at first, but once you get used to it, you'll be able to work many times faster than with a mouse.

Where to type the command

Type the command into the terminal and press the "enter key" to execute it. Terminal by pressing "ctrl" + "alt" + "T" keys You can start it. Then a screen like this will appear. Type the command after the $. 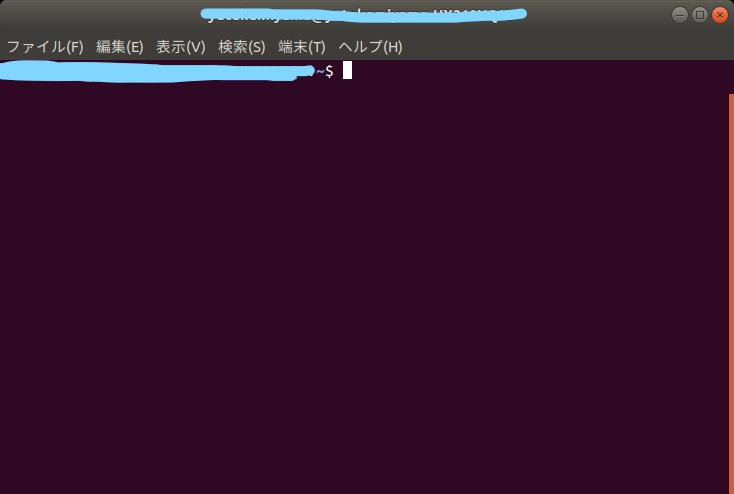 The shortcut keys for operating the terminal are as follows.

The directory structure of Linux is as follows. At the top is the root directory, and below that there are directories separated by various roles. The first thing you'll see when you boot Linux is / home. The user's work is basically done in / home.

If you use .filename, the file will not be visible normally. For example, this is the configuration file .bashrc that is loaded when you start the terminal.

bash bash is the most basic and well-known CUI on Linux. There are also tcsh and zsh. bash can also be used as a programming language. It can be used when automating operations.

If you search on the net, a list of commands will appear, but it is difficult to find out which one should be prioritized and remembered. First of all, you should remember the following three things. Let's type in the terminal and try it. By the way, there is a space after the command. cd(change directory) This command moves from the current directory.

ls(list) Display the contents of the directory.

echo This command displays characters on the screen. If you type ʻecho hoge`, ** hoge ** will be displayed in the terminal.

Note that commands are case sensitive, so you can't use Ls instead of ls.

Now that you have the basic commands, let's learn how to work with files and folders. mkdir ** Command to create a folder. ** There are two methods, one is to specify the path and the other is to create in the current directory.

Create a huga folder inside a folder called hoge.

The following is how to create in the current directory.

touch ** Creates a file with the specified name if the file does not exist. ** If it already exists, the creation date and time will be updated. Create a file named "file" with touch file. rm This command deletes a file. If you specify a directory name with the -r option, the folder will be deleted including the files inside.

cp This is the command to copy.

Copy the file A to the directory B.

mv It has two functions: renaming files and moving files.

Rename the file A to B.

Move the file A to a folder called hoge. You can specify multiple files to move.

cat  If you specify a file name after this command, the contents of the file will be displayed.

Use this when searching for files or directories or when you want to narrow down. grep ** Extract the line containing the specified character ** command. Used when searching for a file name. I think it's the most frequently used command. It is often used in combination with a pipe. file This command checks the file type. wc This command counts the number of characters and lines in a sentence.

Count the number of lines in a file called hoge.

Counts the number of characters in a file called hoge.

On Linux you can install the package using the ʻapt install` command. apt is a command for package management. The packages provided by apt are very easy to install with a single command. For software not provided by apt, download the source and build it yourself.

Below are the commands to install the vim editor. There are other editors such as "nano", "emacs", and "code", but detailed explanations are not given here.

Convenient functions you want to know

** 2. Display the match for any single character ** No characters are included. ls a? Shows only those that match "a + any string". ls ??? Shows only 3-character filenames.

** ・ User type ** u ... file owner g ... users in the same group o ... other users ** ・ Permission to allow ** r ... read permission w ... write permission x ... execute permission chmod A command to change permissions. The created file cannot be executed as it is, so it is often used to make it executable.

The following is the command to give execute permission to the file.

On Unix-like operating systems including Linux, all operations are treated as file operations. For example, keyboard input, screen output, and printer are all files. This abstraction allows you to do a lot of useful things that you couldn't do when using device drivers. Typical examples are filter functions and redirects.

Read from a file instead of standard input

Output to file instead of standard output

If you do cat list.txt, you can see that" abc "and" def "are written.

** A command that connects the standard output of the program on the left to the standard input on the right. ** ** By typing the following command, you can output only those containing "vim" from the list of packages. The results displayed by ʻapt listare connected by|and narrowed down bygrep`. Searching is difficult if it is left as it is, but you can search with just one line by connecting with a pipe.

You can sort, format, and filter the contents of the file. For example, prepare a file in which words are described as follows.

The following command should convert uppercase letters to lowercase letters, sort strings containing i or l in abc order, and output.

This is basically what you need. If you have any other knowledge that you should know about this, please comment.