[PYTHON] What is the ROC curve? Why shouldn't it be used for imbalanced data? Easy-to-understand explanation

According to Wikipedia "Receiver operating characteristic (ROC) is a concept of signal processing, which is a standard characteristic when determining the existence of something from an observed signal.

The upper part of the figure shows the distribution of the results of a specific test for a certain disease by negative and positive persons. In this example, the negative person shows a value with a smaller overall result. Criterion (criterion, cutoff point) is introduced there, and if it is above that value, it is positive, otherwise it is negative. Now, if you adopt B as the cutoff point ..... "

Wikipedia explains it in more detail, so let's read it later, but first let's understand the ROC curve simply.

ROC curve is "a curve created by showing TPR and FPR for each cutoff point of the classifier" </ b>.

To understand this, we first need to know the meaning of the terms (TPR, FPR, cutoff points).

To understand TPR, you first need to understand TP. This is the number of samples that were positive to the classifier and were true </ b>.

This is the number of samples that the classifier was negative (Negative) and it was False (False) </ b>.

This is the number of samples that are positive to the classifier and false. </ B>

This is the number of samples that were Negative to the classifier and were True </ b>.

This is the percentage of true positives from the total number of positives </ b>.

This is the percentage of false positives from the total number of negatives </ b>. 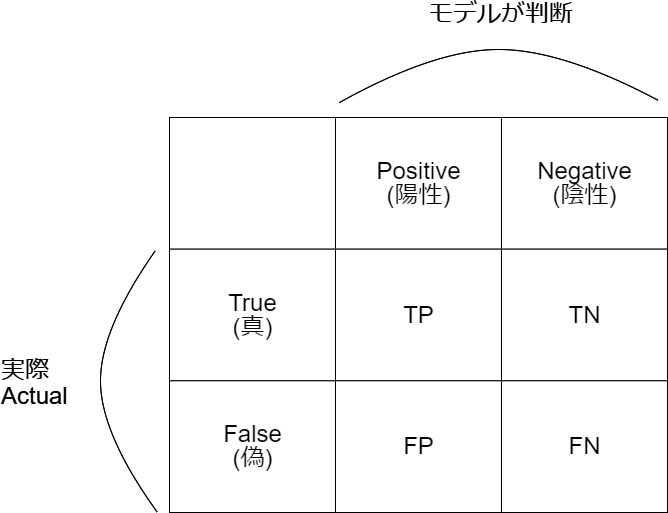 The cutoff point here is the boundary between whether the classifier judges positive or negative </ b>. For example, if there is a patient with a 58% chance of having cancer and the classifier cutoff point is 50%, the patient is 50% or more and is judged positive. If it is 50% or less, it will be judged as negative.

So how can you actually show it with a classifier? The following shows a cutoff of 75% using logistic regression as an example. (By the way, the meaning is the same whether you call the cutoff 25% from the left or 75% from the right, but here we are counting from the right.) 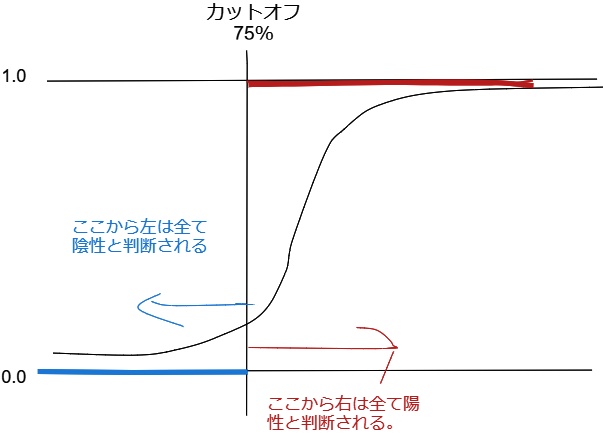 You can see that the classifier determines that all probabilities (Y-axis) above 0.25 are positive.

(Again) What is the ROC curve?

ROC curve is "a curve created by showing TPR and FPR for each cutoff point of the classifier" </ b>. 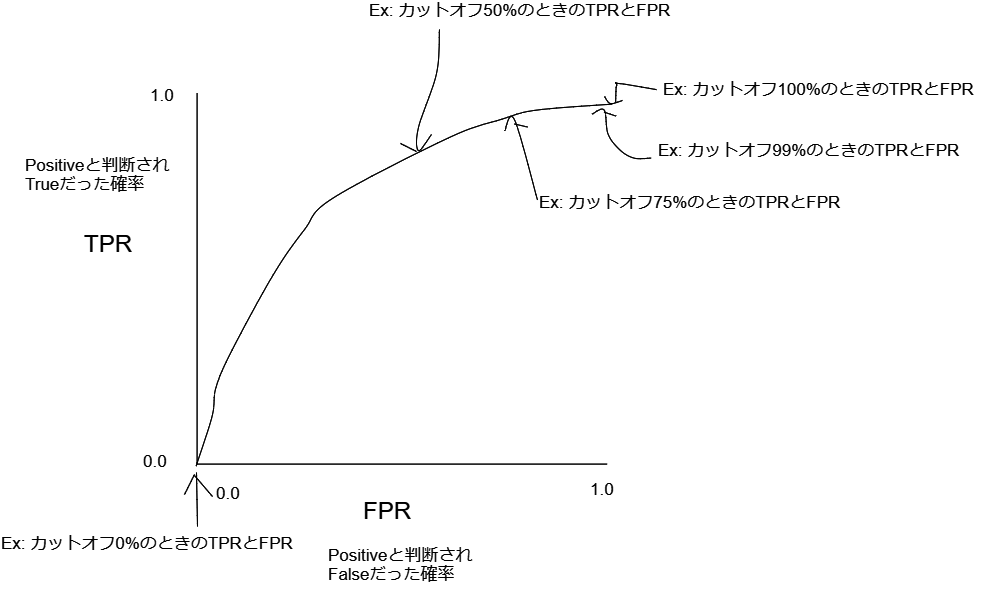 Using a logistic regression classifier as an example, I illustrated why TPR and FPR increase as the cutoff moves toward the negative side.

When the cutoff is 0% (when all data are judged to be negative), the classifier does not judge to be positive in the first place, so it can be seen that both TPR and FPR are zero </ b>. 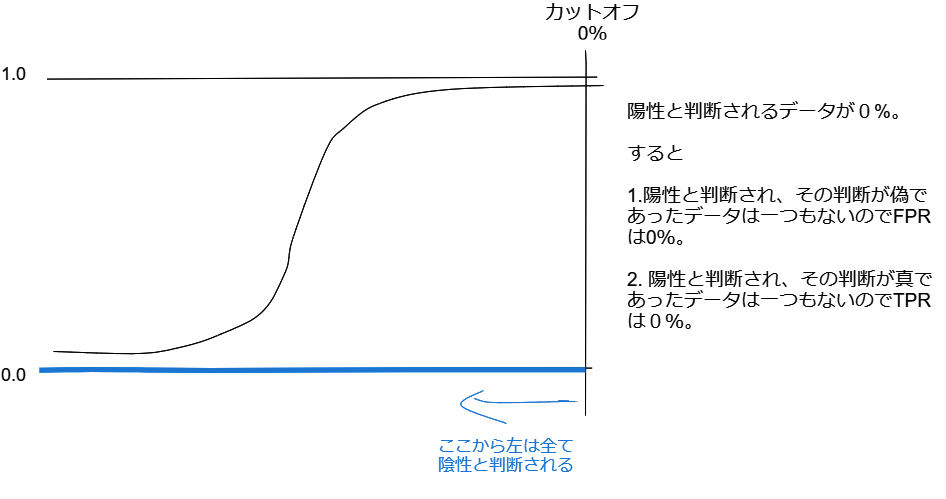 When the ROC curve is diagonally straight, you can see that the classifier makes a random decision (P (X) = 0.5). This is because TPR and FPR increase at the same rate each time the cutoff moves. </ b> 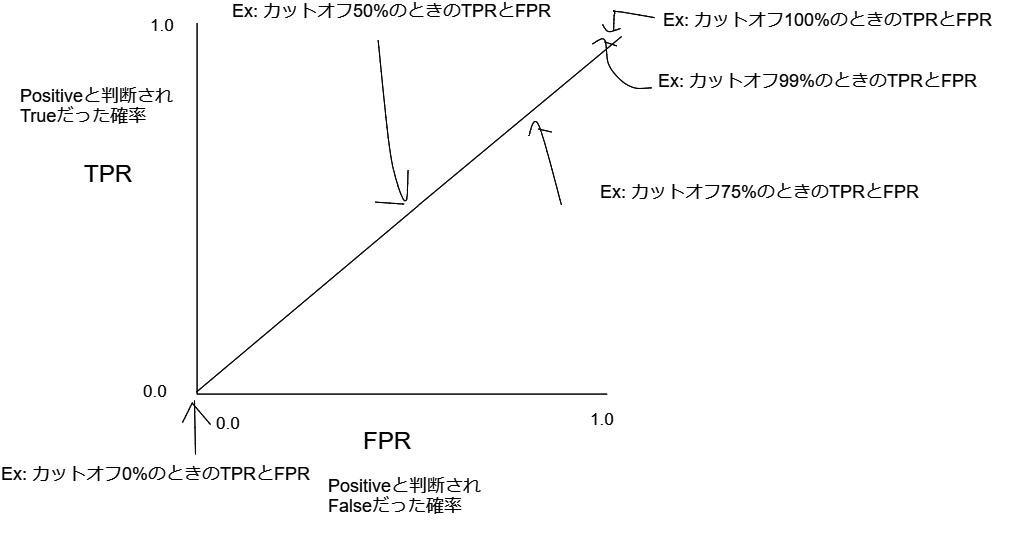 ROC-AUC is the area under the curve. 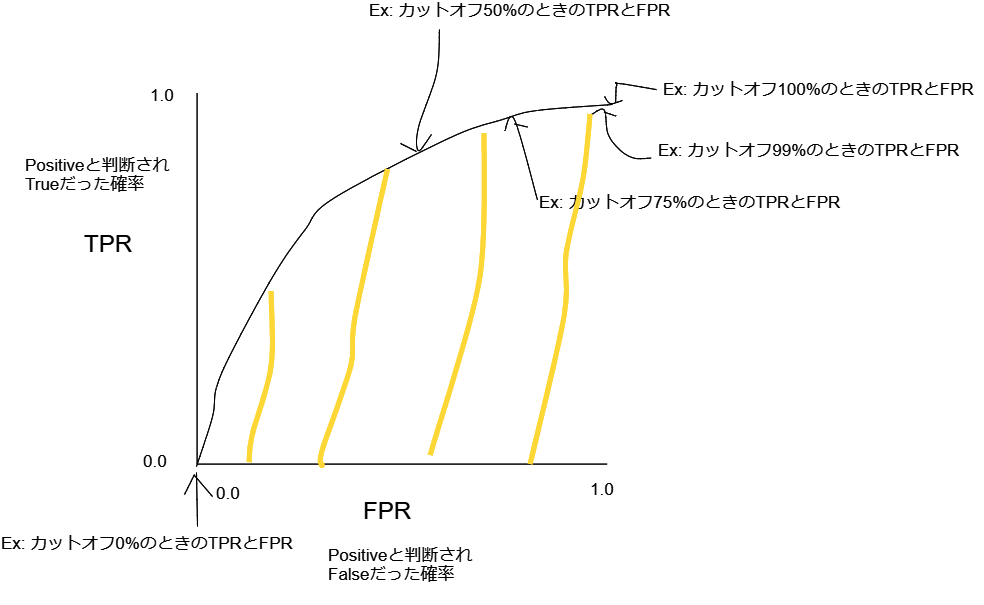 When ROC-AUC should not be used

When the data is unbalanced

ROC-AUC gives a high score for imbalanced data regardless of the quality of the model. Because FPR tends to be low. </ b> As an extreme example, let's say you have 10000 rows of data (10 rows are positive data and 9990 rows are negative data). Then, the total number of negatives, which is the denominator of FPR, is 9990, and FPR is close to 0 </ b>. On the contrary, TPR does not change that much. Therefore, even when the FPR is low, the TPR is high and the ROC-AUC score is high.

Also, ROC-AUC should not be used for imbalanced data as an index to see the difference between the two model scores. </ b>

The Relationship Between Precision-Recall and ROC Curves http://pages.cs.wisc.edu/~jdavis/davisgoadrichcamera2.pdf

What is the ROC curve? Why shouldn't it be used for imbalanced data? Easy-to-understand explanation
What is Python? What is it used for?
What is the interface for ...
[For IT beginners] What to do when the rev command cannot be used with Git Bash
What is the python underscore (_) for?
Why is cross entropy used for the objective function of the classification problem?
I tried to make OneHotEncoder, which is often used for data analysis, so that it can reach the itch.