Nowadays, the Bayesian approach is no longer the norm, and how to collect learning data and dive into deep learning is popular, but sometimes you may do such classical calculations.

This article is largely based on Chapter 11 of PRML.

When you're involved in machine learning, you'll often hear the word Monte Carlo simulation, or the Monte Carlo method. Before I wrote this article, I was vaguely thinking, "Ah, MCMC, right?", But when I tried to explain it concretely, I got stuck in the answer. In such a case, if you ask Wikipedia, you can understand the general idea, so I would like to take a look at the Wikipedia article for the time being.

Monte Carlo was just a place name. When I heard the word casino, I wondered if the people who were trying to win at the casino created it to do a simulation.

In other words, most things can be called Monte Carlo simulation or Monte Carlo method by using random numbers. In fact, the article states that the "Miller-Rabin Primality Test", an algorithm that stochastically determines whether or not a prime number is a prime number, is also the Monte Carlo method. However, this time I'm focusing on machine learning, and I have no time to overlook the primality test method.

Therefore, I would like to limit my thinking to the following.

If you can generate the random number $ X $ that appears in the above problem setting, you can apply it to various simulations and numerical calculations.

Suppose it is possible to generate a uniformly distributed random number $ U $ of $ [0, 1] $ throughout. From this $ U $, a random number that follows the famous probability distribution

The probability density function $ p $ of the exponential distribution is expressed by the following formula. 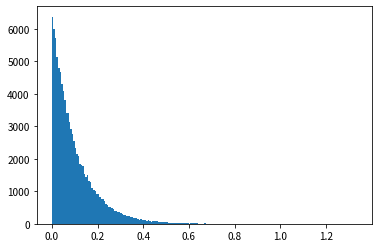 Next, I will introduce the "Box-Muller algorithm", which is a famous algorithm for creating random numbers with a standard normal distribution. From uniform distribution $ (z_1, z_2) $ on a disk with radius 1

I gave the formula in an amakudari manner because I gave up deriving this formula. .. 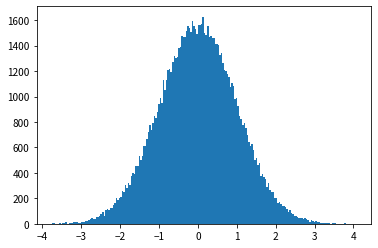 The cumulative distribution function $ G $ of the Cauchy distribution can be easily written as follows by using the inverse function of the $ \ tan $ function called $ \ arctan $.

Therefore, the inverse function $ F $ of $ G $ can be written as follows. 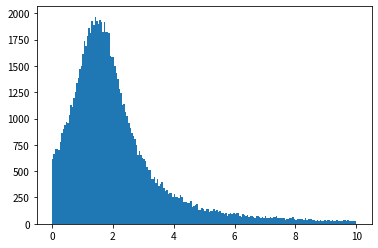 Looking at the results of the histogram, we can see that the shape is similar to the probability density function of the exponential distribution, and that random numbers that follow the exponential distribution can be generated. However, if you take a closer look at the script, you'll find a line that looks like y = y [y <10]. If you remove this line and execute it, it will be ridiculous.

This means that ridiculously large outliers can be generated. This result is somewhat convincing, recalling the fact that the mean Cauchy distribution diverges. 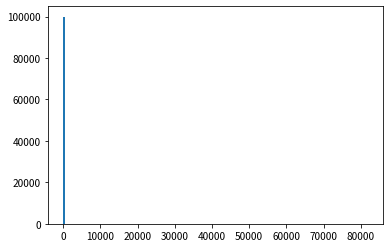 If I limit the random number value to 10 or less, I think that the average value is around 2, but since an extremely large value rarely occurs, the average value has been pushed upward. I remember the story of the difference between the average income and the median income.

Points of change of variables

You need to be familiar with the characteristics of the distribution. In most cases, you need to be able to write the cumulative distribution function in a simple form. I think it would be a lot of work to ask for it in any other way. Also, if F is not a function that can be easily calculated, it makes no sense after all.

The probability density function of the gamma distribution is expressed by the following formula.

Now let's find k that exceeds the Cauchy distribution. It was troublesome to calculate by hand, so I relied on the script this time. 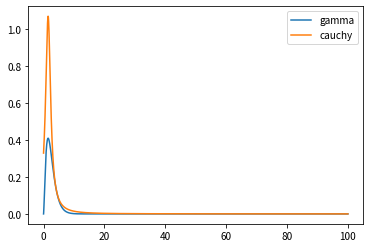 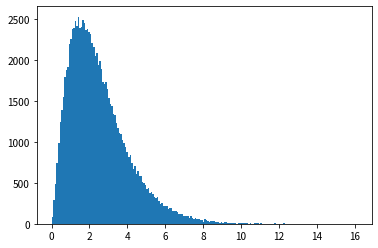 We need to have a proposed distribution $ Q $ that can easily generate random numbers. You also have to calculate $ k $ that satisfies $ kq \ geq p $. If the value of $ k $ is inadvertently increased too much, the random numbers generated must be rejected, so we want to make $ k $ as small as possible. However, in that case, it is necessary to derive from the concrete form of the function or calculate the value precisely, which is a decent amount of trouble. Also, when determining the value of $ k $ or calculating whether to reject it, the value of the probability density function is used for both $ P $ and $ Q $, so the probability density function itself must be easy to calculate. Therefore, this method cannot be applied when the calculation of the probability density function itself is difficult, such as in a model in which multiple variables are intricately intertwined.

So far, we have given an overview of standard random number generation methods. After looking through it, you can see that the original probability distribution needs to be in a form that is easy to handle to some extent.

It was found that statistically important random numbers such as normal distribution, exponential distribution, and gamma distribution can be generated from a uniform distribution. I think this alone can do a lot of things, but there are more complex models out there that use a Bayesian approach. This generation method alone does not have enough weapons to counter the complex Bayesian model.

Therefore, an algorithm called MCMC that can generate random numbers for a more complicated model comes out. Next time, I would like to explain the graphical model, which is the main area to apply MCMC, and the concrete method of MCMC.