When I was searching for what I wanted on Amazon, I felt that the level of Japanese explanations for suspicious products had improved recently, and I was impressed that I was enthusiastic about studying even though Japanese was difficult. So I decided to make a program to weaken Japanese.

I used the following.

I set the following Japanese patterns that foreigners are likely to make mistakes or cannot judge subtle differences in nuances.

I ** write an article ** once every three months. / Articles that look interesting today are lined up with trends **. / JavaScript ** to ** I personally like Python.

Everything feels strange. Here, the conditions under which mistakes in particles and selection mistakes occur are as follows.

2. Write the part that should be in the past form in the present form

When I write a long sentence in English, I sometimes forget to match the tenses in the latter half, and I think it's the same feeling.

The conditions and processing details for this error are as follows.

・ When the auxiliary verb "ta" appears, the word before it is replaced with the present form.

It feels like I've saved a list of the original words (word_list) and its canonical list (basic_list). The rest is removed by replacing the auxiliary verb "ta" with an empty string.

3. Write a word with another homonym

** Search for articles that look interesting **. / The room is ** warm ** because the stove is attached. / Answer questions to the article **.

The conditions for this error handling are as follows.

・ The conversion target is only verbs, adjectives, and nouns. ・ The verb "to" is not converted. ・ Homophones shall refer to those with the same part of speech and uninflected word as the original, and shall be in Japanese only.

In addition, the specific processing is as follows.

For WordNet, I downloaded and used * Japanese Wordnet and English WordNet in an sqlite3 database * from here.

The processing content and code of ``` search_synonyms (word)` `` that performs 1 is likely to be long if written here, so WordNet structure and synonym search ). Please refer to that for details.

In 3, since it could not be realized by the standard function of Mecab, the inflected data for each part of speech included in the dictionary data (mecab-ipadic-2.7.0-20070801.tar.gz) used in Mecab is used. I tried using it.

I was a little troubled by the character code problem when reading csv. It's still developing (I didn't see it because I don't have else but I can't go there)

The processing flow is summarized below. The name of the sub-process has been shortened, but do you know the correspondence? 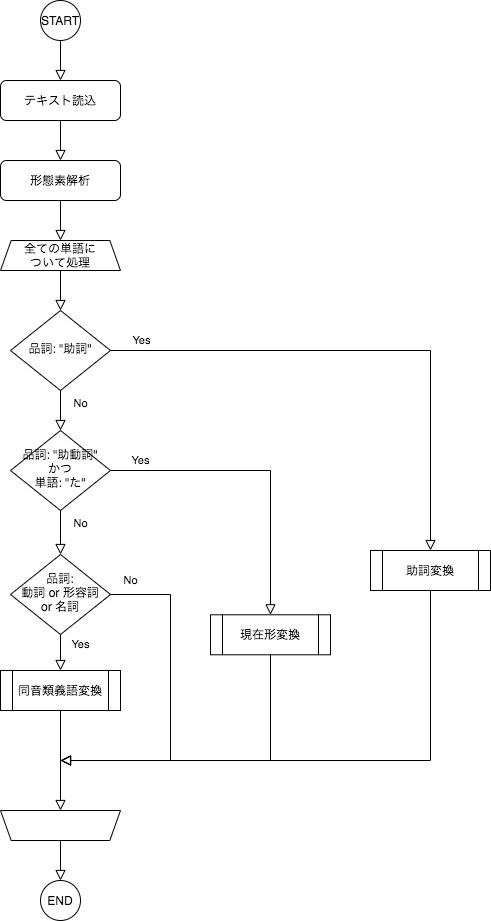 I applied it to the description (Amazon) of the recently purchased AirPods Pro.

I got some suspicion. I might not have bought this.

Program to weaken Japanese
Program to convert Japanese to station name
How to start the program
Modify Ubuntu tofu to Japanese environment
Convert some Japanese names to antonyms
Add Python 2.7 Japanese documentation to Dash.app
Shell program to display multiplication tables
How to handle Japanese in Python
How to set the server time to Japanese time
An introductory guide to program performance tuning
How to use Japanese with NLTK plot
How to display python Japanese with lolipop
Program to get favorite images on Twitter
I want to make an automation program!
Getting started: 30 seconds to Keras Japanese translation
Various comments to write in the program
How to enter Japanese with Python curses