A set of 3 H x W pixel 1-channel images is given. Two sheets give a feature vector as a set, and one sheet is segmented and becomes an objective variable. The idea is to reproduce another segmented channel from two channels of data.

As a first idea, it would be nice if we could predict another channel from the pixel values of 2 channels in pixel units. Of course, the subject is to think about the convolution matrix and read up to a few pixel distances around it to make a prediction.

For the time being, as a first attempt, I tried this classification.

The execution environment of python was separated using venv, and the necessary libraries were installed in it using pip.

Two 1-channel images are read and stacked to form a 2-channel image. It should be one-dimensional and the class (0 or 1) should be compared with the pixel value [p1, p2].

I used scikit-image to read the image. Anything should have been fine this time. When you load the image, it becomes a H x W numpy array.

If you do, you can check it as an image

If you do something like that, you can expand the pixel value.

I'm going to classify with this, so I'll visually check it properly.

Create an array of numpy arrays of the read HH, HV, annotation images and scatter plot them in 3D with matplotlib. When I try it, this is as slow as hell.

I can't plot everything very much, so I'll try to plot only a part by making it one-dimensional as follows.

The following results were obtained. 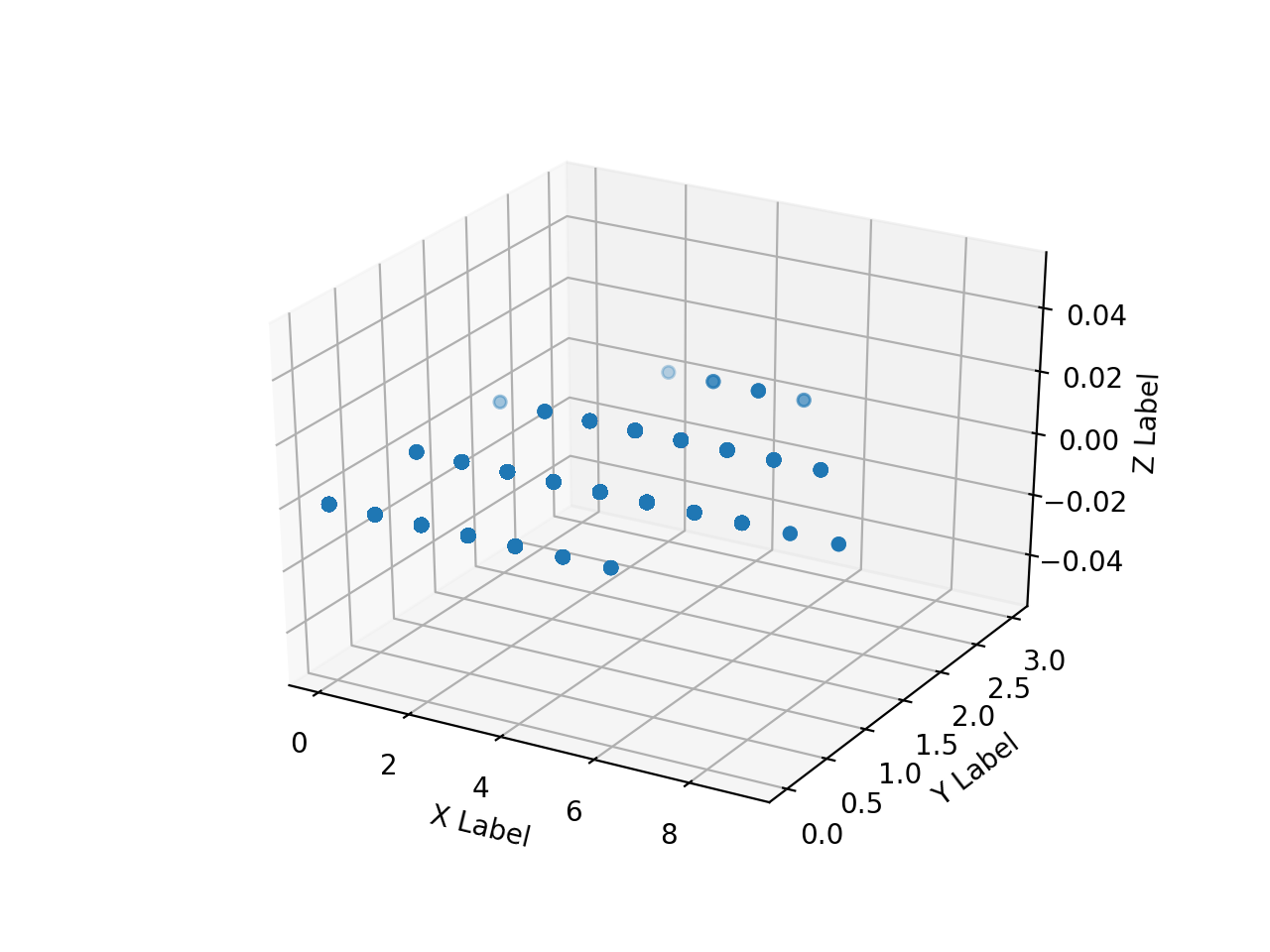 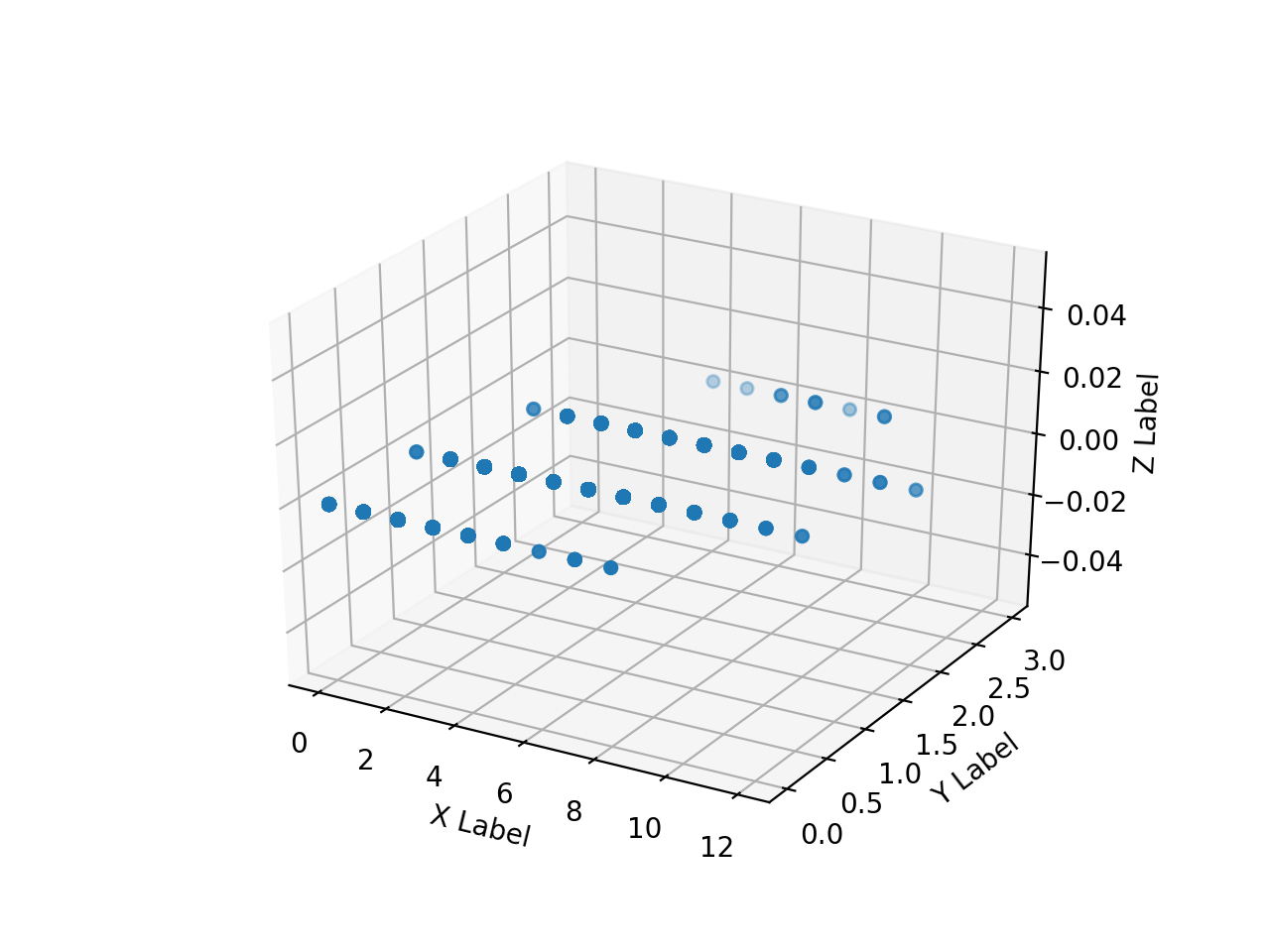 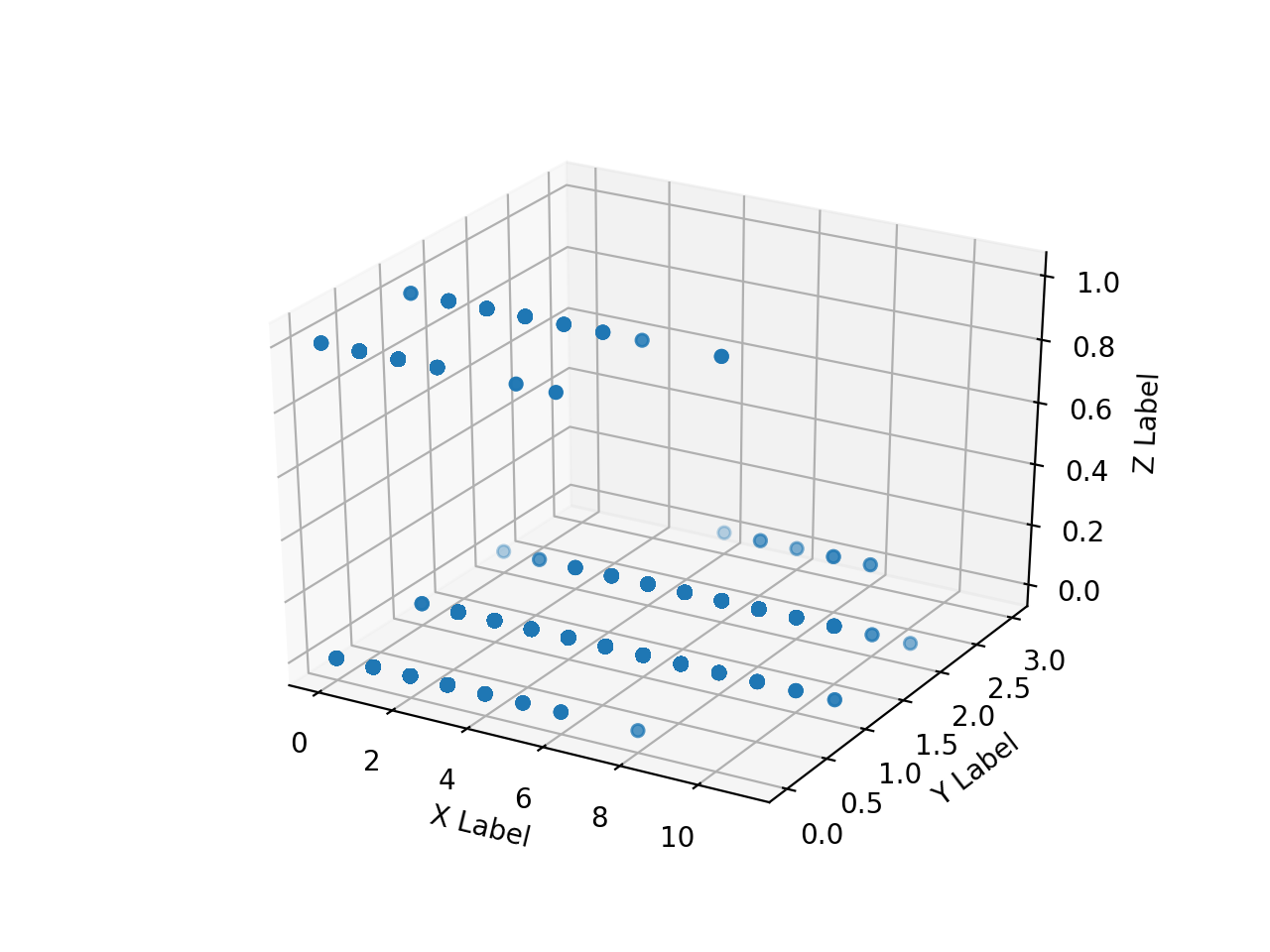 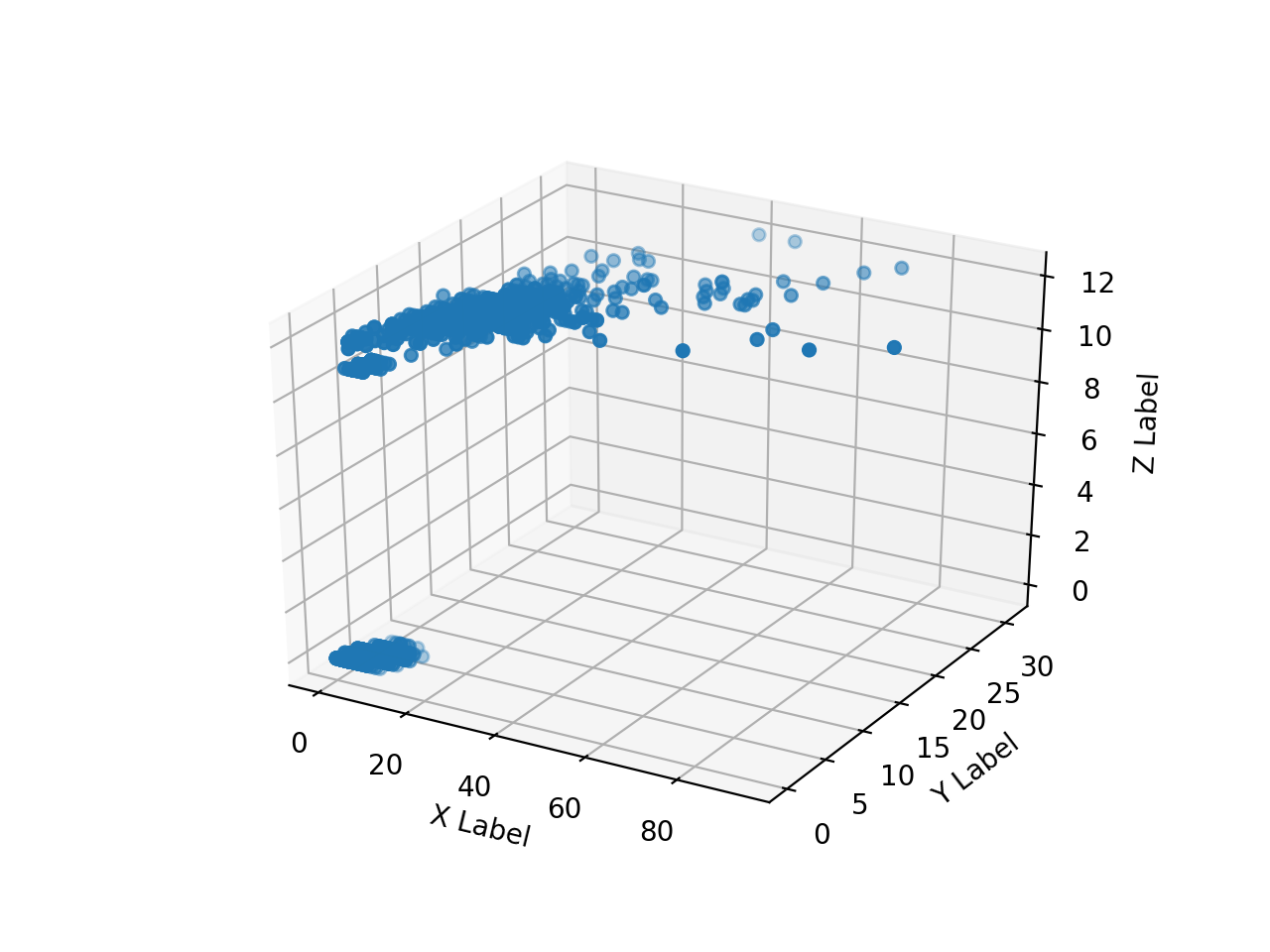 Due to the convenience of the annotation image, the area where the pixel value (Z) of the teacher data takes some value is biased to the back. It can be seen that the same HH and HV values are divided into 2 classes. Therefore, it is reckless to classify only HH and HV into 2classes, but for the time being, let's see what can be obtained with this.

To make it, first make an array with 3 2D arrays arranged side by side (imgx), and then use transpose () to change the "axis" to make the channel direction the innermost (imgy).

Since 3channel is required, \ * 0 is used to create and include all 0 planes. Also, since the pixel value is too small, it is corrected by \ * 16 so that it can be distinguished (imgz).

Since it's a big deal, I'll try to display it side by side with the original image.

Gray2rgb () is used to match the number of channels when joining.

Let's get back to the story. After reading one H x W 1channel image, reshape it to 1 x H \ * W. If this is transposed by vstacking 2 images, the pixel values of 2 images are arranged for each pixel, and if it is also set with the annotation image reshaped to 1 x H \ * W, it seems that a classifier can be created with SVM.

The scary thing is that the data eaten by training is an N x 2 matrix, but the label (objective variable) eaten by scikit-learn's svm is a 1 x N vector (so transpose () in the calculation of train". Is attached). Why is it different vertically and horizontally?

After this, feed the SVM classifier object entirely as shown below, and finally serialize itself with joblib.

However, this svm.fit () takes a lot of time and doesn't make any progress, so it gets stuck somewhere if it's really calculating. I can't tell if it's useless no matter how long I wait.

So, I'm wondering if it's okay to do it, but I'll try to cut out the data little by little and train it in sequence. The code below worked.

I suddenly became addicted to this when verification was done in a different file group in the first place, and I didn't want to train_test_split because I wanted to put all the data into learning.

If you simply insert the part of train, label into train_X, train_y, it will be rejected because the haste label data contains only correct examples.

Come to think of it, the source of this teacher data was a single image with pixel values, and the only different part of the class was the small area at the bottom of the image. If you pinch the pixel value from the top, only one class will be included if you do not advance considerably.

When I tried it, this was extremely slow. It's said that it's fast because it's numpy right away, but it's naturally slow if you do this.

The learning itself was done on AWS. When learning is finished

The SVM object is serialized as Yasumura. Bring this to your local PC For the file at hand

If you give the predicted value and combine it and return it to the image, it seems that you can judge how much it looks like as an image.

So, when I try it, the module name is slightly different between python on linux in the AWS environment and python on the local MacOS as shown below, and it cannot be read.

Certainly, if you look at the beginning of the serialization file, if you make it on AWS

There is Ansco, but when I try to spit it on a mac

There is no Ansco like. Well, there is a blur in such a place.

I couldn't help it, so I tried to predict it on AWS, but unlike learning, it's only one path calculation, but it's deadly slow. As mentioned above, there are many calculation points because there is no extraction to make the numbers positive and negative, but it is still slow. 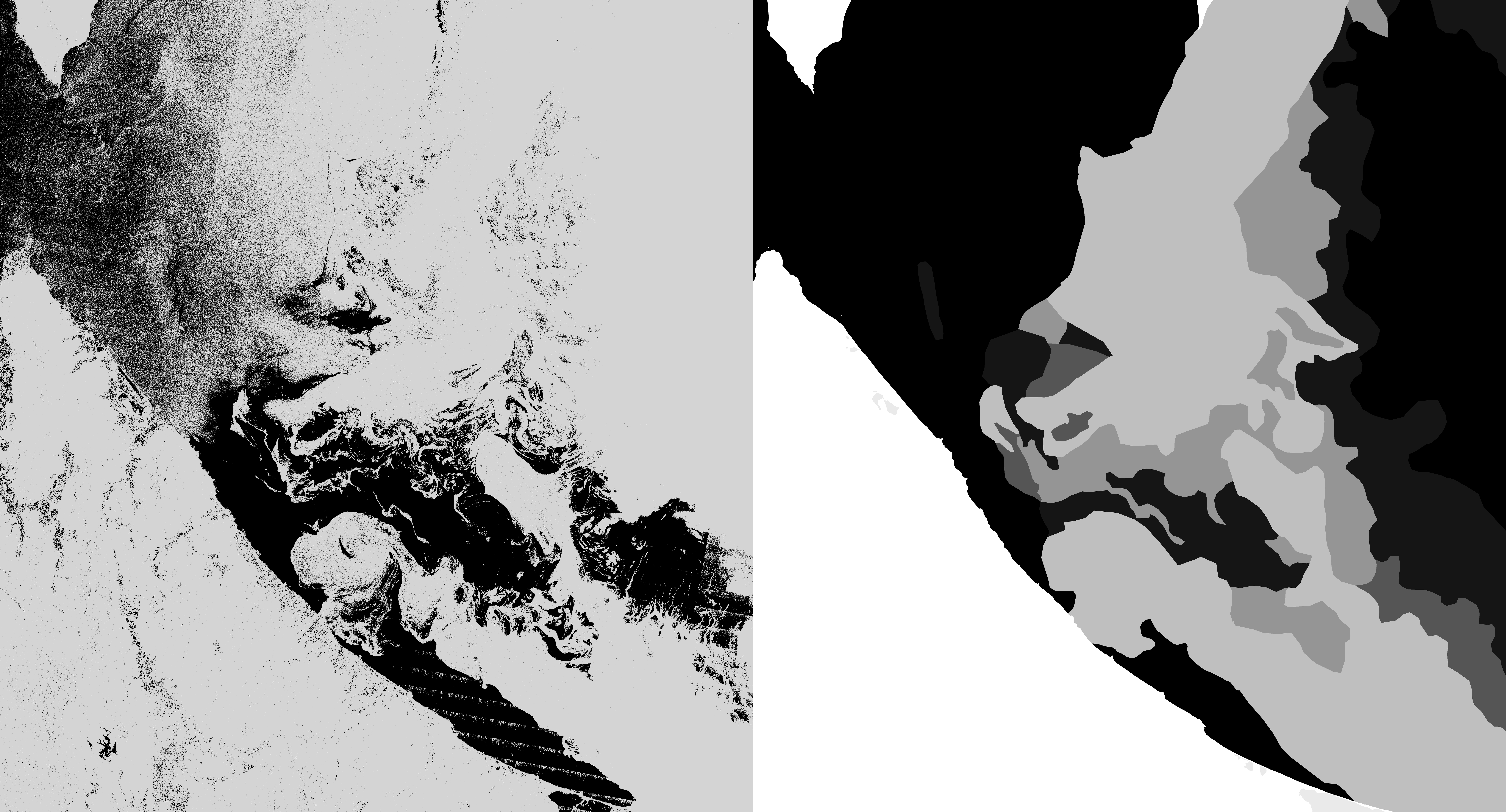