[PYTHON] Get started with influxDB + Grafana

I always used Elasticsearch as a visualization tool, but if you want to record numerical data such as so-called server metrics data, try influxDB as well.

influxDB is classified as software called Time series database (Time series database). As the name suggests, a time-series DB is a DB that has a mechanism for storing data that changes over time. [There is an article page in English Wikipedia](https://en.wikipedia.org/ wiki / Time_series_database) says that RRDTool is also a time series DB.

Considering the comparison with RRDTool, the features of influxDB are as follows.

Grafana is a dashboard tool forked from Kibana, but it is not specialized for influxDB and can be linked with Graphite and CloudWatch. This also has an authentication mechanism by default.

Since it's quick, I launched the official Docker image with Docker Compose.

** 2016-12-22 Addendum: ** Added Data Volume description to Grafana container settings. Because it was necessary to save the sqlite directory in order to persist Grafana's dashboard, user settings, etc. It is possible to save the dashboard settings etc. in an external DB such as MySQL, but for the sake of simplification, I decided to use sqlite prepared by default this time. (Reference: Grafana --Configuration)

Of the two ports open in influxDB, 8083 is the Web UI and 8086 is the REST API endpoint. Also, since the data is saved in / var / lib / influxdb, it is synchronized with the host OS as a data volume.

Grafana just opens a port for the web UI. In the case of Kibana, the connection with Elasticsearch was set in kibana.yml, but since Grafana sets the connection with the DB on the Web UI, it is not necessary to consider the configuration file etc. at this point.

connection between influxDB and Grafana 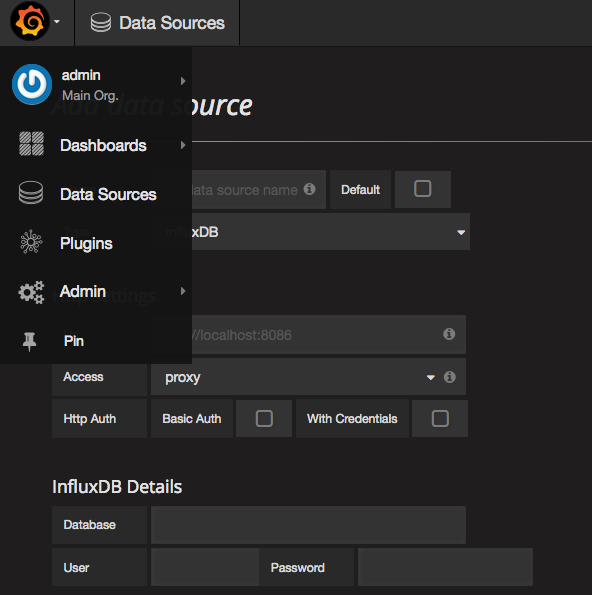 The initial settings for the authentication user ID and password are root: root for influxDB and admin: admin for Grafana.

I used Python this time, but before that, I will talk about the structure of influxDB.

I haven't used it properly because I have tried it yet, but it would be nice to have a Retention Policy. It is possible to store unlimited data to prevent the event of overflowing capacity and to ensure availability.

With Elasticsearch, if you insert json appropriately, you can already use it, so you could do Zubora operation like throwing json obtained from API as it is, but in the case of influxDB, the data structure to be included in json is decided.

There seems to be some arbitrary use of fields and tags, but the big difference is that fields is not indexed, but tags is indexed. So you might use the GROUP BY clause when querying, but we're using the tags here. The metadata used for searching etc. should be tags, and the data that changes over time should be suppressed as fields. I usually don't query for changing data, such as when the CPU usage is 80%, so it's understandable that fields isn't indexed.

I will briefly show the source.

it's simple. ʻThe password is written directly in InfluxDB Client, but hard coding should be stopped during this operation. As for the data json, as I wrote earlier, I'm trying to put multiple fields and tags`. Now you can draw a graph for each machine.

Since it is an operation with GUI, I will omit the details, but I will visualize it by arranging parts called Panel on Dashboard like Kibana. In addition to Graph, there are also Panels such as Single stat that can display only the latest value in large numbers, Text that can write sentences with Markdown, etc., and the degree of freedom is high.

Also, when specifying the data to be displayed in Graph etc., it is set by SQL statement, so while it is easy to understand, it is necessary to hold down how to use SQL statement in influxDB. However, since you can create SQL by clicking candidates on the GUI and combining them, even a slightly vague understanding can be quite good. It's very easy.

When I imagined the usability of Elasticsearch + Kibana, I was confused by the fact that the json key that needs to be set when inputting was defined and the selfishness was different (rather, if it is json, I can search anything moderately. The ES that can be created is God), and as for the usability, it is "easy to visualize the data" and it is easy to see. Will it compete with Elasticsearch at first? I thought, but now I understand that they are tools with distinctly different defensive ranges.