This is Qiita's first post. I bought it at the university co-op ~~ It was shit late ~~ I am doing dual boot of Ubuntu + Windows using the co-op PC. I basically use it at home, but it's heavy and annoying to bring it to university. What if your PC is crushed by the rush hour? So, I installed it on a USB memory so that I could carry the Ubuntu environment with me.

I did it a year ago so I forgot how I did it. Was it Unetbootin?

2020.5.3 Addendum: EFI partition (mount point is / boot / efi) is required to boot UEFI. It seems better to proceed without creating a partition for data sharing with Windows and make `` `/ dev / sdc1``` an EFI partition.

Double-click "Install Ubuntu 18.04" on your desktop. If you make a mistake, the SSD data will fly, so be careful (the theory that you should have removed the SSD in the first place). Note that parts such as `` `/ dev / sdc2``` will change depending on the environment, so please read as appropriate. 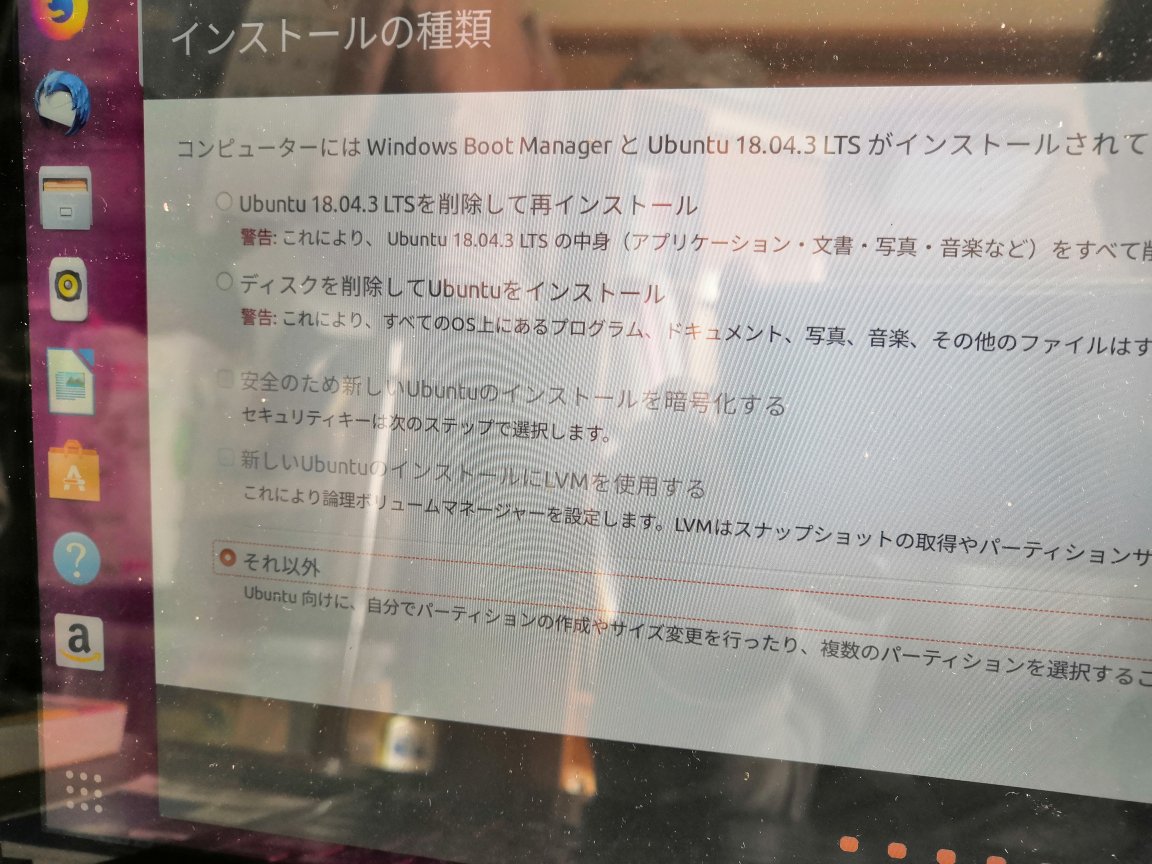 I changed the setting because the bottom of the screen was cut off due to the resolution and I could not select the menu of the device to install the boot loader.

--It's bad not to boot without the larger USB stick --Repair by removing the larger USB memory. Reference site (web archive) is okay It was. Rest assured for the time being.

Repair the boot loader of the larger USB stick

This was done using another PC with Windows only installed. Set the EFI partition to / dev / sdc1 (change the partition for sharing later).

Boot from the larger USB stick

You can now select Ubuntu from the grub os selection screen.

However, after this, the login screen did not appear and I was in emergency mode. When I googled, `` `/ etc / fstab``` seems to be suspicious.

Create a separate partition for sharing. The order of the numbers has changed.

Write the mount settings by specifying the corresponding UUID.

I was able to start

When automatically mounting SSD etc., it may not be possible to start unless you write `nofail``` in the setting of `/ etc / fstab``` (when it cannot be mounted such as starting on another PC) It will be in emergency mode soon). It cannot be mounted with Windows BitLocker running (that's right).

Was the partition table msdos?

I can still start it. Is it a combination of UEFI-MBR?

Measures to extend the life of USB memory Memo

It is unknown how effective it is.

2020.5.3 Addendum: When I tried it in the same way, it failed as expected, so I repaired the boot loader. At the time of installation

If you see something other than the device you are installing to (`` `/ dev / sdc```), it will likely fail.

I tried to see if the fat32 partition could be read by Windows even if it was at the end (across ext4) instead of the first, and it was (and was possible). The site I referred to was quite old, so it's important to check the latest information. I want Windows 10 to stop consuming 2GB of memory just by booting (I hate this and don't want to use virtual environments).

Thank you for reading to the end.