Recently, the number of notebook PCs with 16GB or more of memory has increased, and even if you handle Linux, you will often put it as a VM on Windows or macOS, or use it as a Docker container. However, using a VM requires a large amount of resources as a whole, especially when working in combination with an IDE, and the waiting time until startup and the response during operation are also worrisome.

On the other hand, if you usually need the functions of Windows and macOS to that extent, now that the functions of the Office suite can be done with the browser, it seems that you should rather focus on the UNIX functions. This time, it is the record of direct installation of Linux on a PC for the first time in about 10 years to use Linux as a normal working environment.

We aim to build a comfortable development environment while meeting the PC requirements of everyday use. On Linux.

Thankfully, there was almost no problem with the plain installation. The following measures have been added.

The Dell XPS 13 I used had the infamous Broadcom wireless card, and when I tried Ubuntu with USB boot, I had already confirmed that the driver wouldn't come in as-is. Probably, I think that it can be handled by entering from "Additional drivers" as in here, but this time Also planned to replace the SSD, so I replaced the wireless card with one made by Intel. This makes it easy to recognize, and so far no problems have been felt.

I bought a card called Intel AX200NGW with Wifi and Bluetooth. It was about 2,800 yen. The shape is almost the same as the one that was originally attached, and it is not difficult to replace it if you are careful, but the location of the small connector is a little different, so you need to be careful when handling the cable with the extra length. (I added an image at the end)

The Ubuntu 19.10 standard accepts input in a framework called ibus. For Japanese input, ibus-mozc was installed so that the OSS version of Google Japanese input, mozc, can be used.

It's partly because my usual usage is a little more minor, but the following inconveniences have occurred.

Unfortunately, the source had to be changed for these. In each case, it seemed that it would take a lot of time to make a complete correction, so I took measures to the extent that it was not inconvenient for me to use. mozc seems to have stopped development about two years ago, and I'm still worried about its future use.

When I was touching the volume control, I suddenly became in a state where I couldn't hear only the left side when using headphones. I started Windows and tried it, and found that it was not a hardware failure, and eventually recovered by adjusting with alsamixer. I didn't know when I first touched it, and I found it in the explanation of here.

So how easy is it to use?

So far, it's very good. Immediately after install, Windows almost stopped booting. I feel that the battery life is the same as or better than that of Windows.

The browser uses Chrome, but it's clearly lighter than it does on Windows. I feel that the time from starting the PC to being able to use it is quite short. Chrome for Windows sometimes suffered from the runaway of the infamous "Software reporter tool", but I'm happy that it has nothing to do with it. I watch Netflix every day, but I don't feel any difference from using it on Windows, including audio. The extension isn't that heavy, but it seems to work fine.

Docker is also very snappy and very comfortable. This is Linux, so it's natural. With 8GB of memory, I'd like to see how far minikube can go. I feel the difference between heaven and earth when I think about what makes me happy and sad at WSL. I haven't noticed any problems with VS Code so far. I tried connecting it to the local docker container with the Remote --container extension and it's still very comfortable.

This time, we replaced the SSD to increase the storage capacity (250GB-> 1TB) and the wireless card to dispel the driver's anxiety. The SSD (M.2 SATA type) is cut off at the bottom left, and the two wireless cards that are being replaced are lined up in the center. You can see that the standard card has one connector on each side that connects the black and white cables, while the Intel card on the left is closer to the right side. 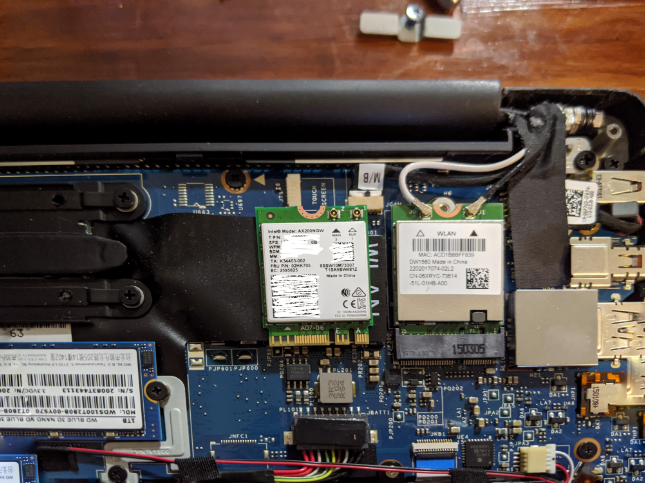 (Since the MAC address was printed, I am processing it a little)