Nice to meet you, I'm muratatatsuro, a new graduate first year engineer. This is a year or two (probably it) to build an aircraft development library (I want to be OSS) by a man who loves aircraft, longs for electrification, is obsessed with autonomous and autonomous driving, and is immersed in python and optimization. It's an introduction to the struggle (I think it can be done in about). Learn or Die !!

How I decided to make it

During graduate school, I was researching the conceptual design and optimization of electrically driven aircraft called electrified aircraft. However, until graduate school, integrated design was only an engine optimization that was just a name, so we created optimization and design tools including aircraft, and an environment where other people could easily touch the aircraft that will lead the new era. I wanted to build and get interested. In addition to this, I am interested in autonomous driving and autonomous driving, experience the optimum road search at the simulation level for the actually designed aircraft (especially small scale ones), and complete the process from design to operation simulation I thought it would be interesting if there was a conceptual design environment for.

** IAEA ** (Integrate Analytical Environment for Aircraft) is a Python library that allows you to conceptually design aircraft and engines in an integrated manner (although it is not yet completed). In addition to the integrated design of aircraft and engine, 2D including optimization framework and optimization calculation verification framework including evolutionary computation system, and autonomous driving support that combines SLAM and deep reinforcement learning. It will be an excellent one (?) Equipped with a flight simulator.

The created library is published on the following Github (to be exact, it will be published). This will surely be wonderful in a year. --Sorry, the path to the repository was incorrect, so I corrected it. (2020 5/16)  IAEA Github repository The only required libraries are numpy, matplotlib, and pandas machine learning 3 types of sacred treasures (should). With this aircraft library, you can make such an aircraft and evaluate its performance, concept diagram, and even economic efficiency! !! 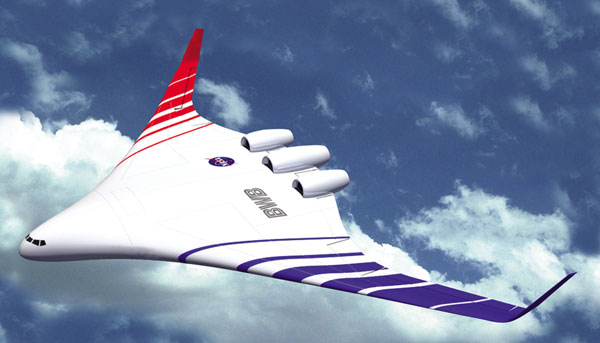 The aircraft and engines handled in this library will be explained. I am strangely familiar with aircraft engines because my laboratory in graduate school was a jet engine system.

In this library, not only conventional aircraft, but also ** flying vehicles **, ** wing-body integrated aircraft **, ** supersonic aircraft **, and a wide range of engines, only turbo engines. Instead, the specifications will be such that performance can be calculated at the conceptual design level, including those equipped with ** batteries ** and those using ** hydrogen fuel ** and ** solar batteries **. (Almost all of this part was implemented during the research.) I would like to explain the details of each when it is implemented.

Theoretically, it is suspicious, but noise is also a close research theme, so I would like to include the field of ** noise ** (environmental compatibility) in the optimization result analysis. (Wish) Also, when creating an aircraft database, I have to enter parameters, but I want to extract values from image segmentation using ** Mask-RCNN ** and automate them, but I can't because I don't have a GPU (I can't) Crying)

I would like to subdivide it and show the implementation flow including mathematical formulas and theory. For now, I'm thinking

Feel like it! If you don't develop at the level of posting 2 posts a month, it won't end ... It's a long time, but if you're interested, please read it ~~

I developed it with much effort, but it doesn't make sense if it deviates significantly, right? I think you can hear the voice. I would like to perform performance calculation and optimization for an actual aircraft and engine combination (a combination of a narrow body machine and a turbofan engine is common in modern times), and compare the published data with the actual optimization result. think. If it comes off too much, I will tune the model!

Currently, we are creating a drawing class for an aircraft. An example will be shown. 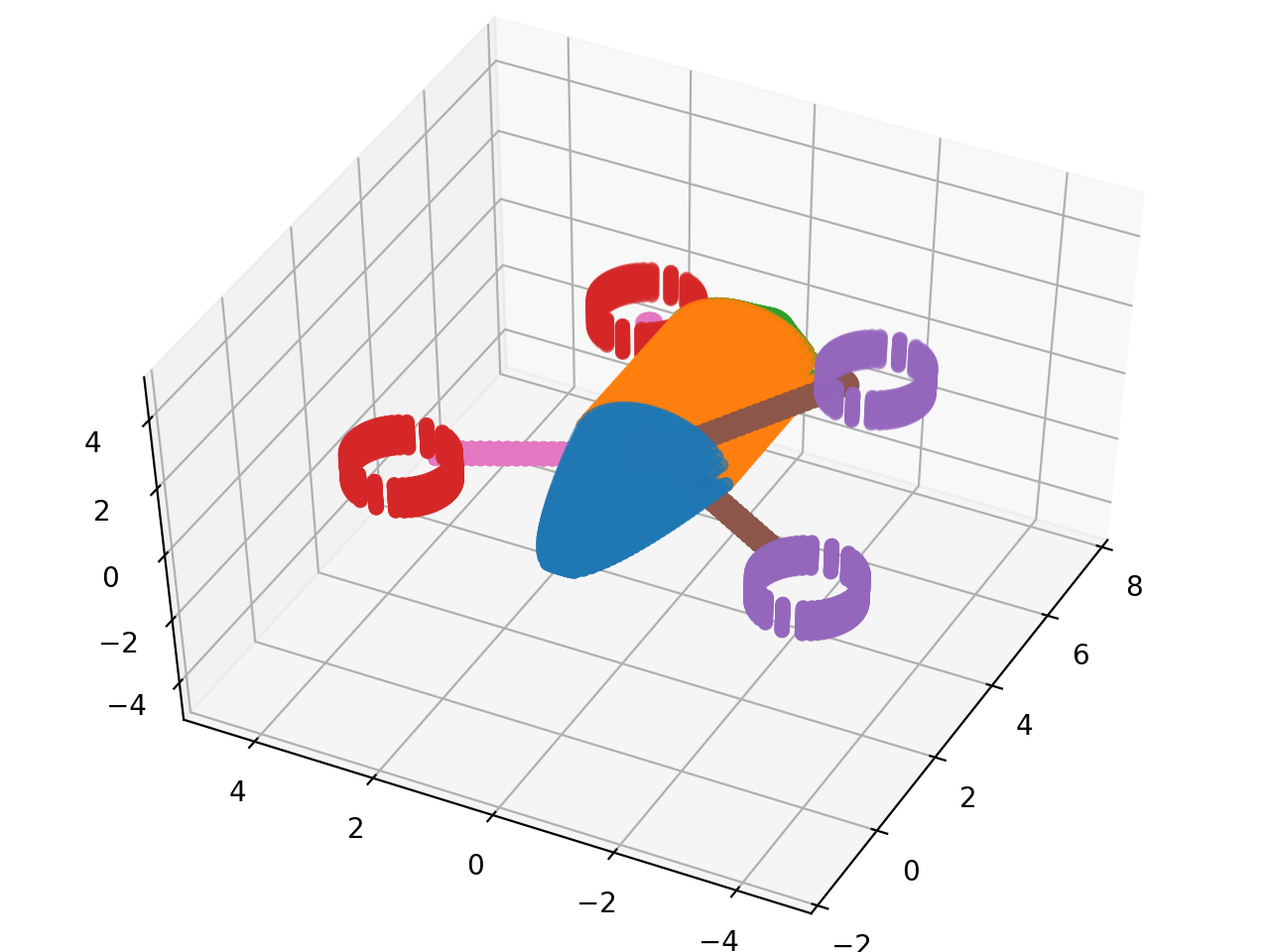 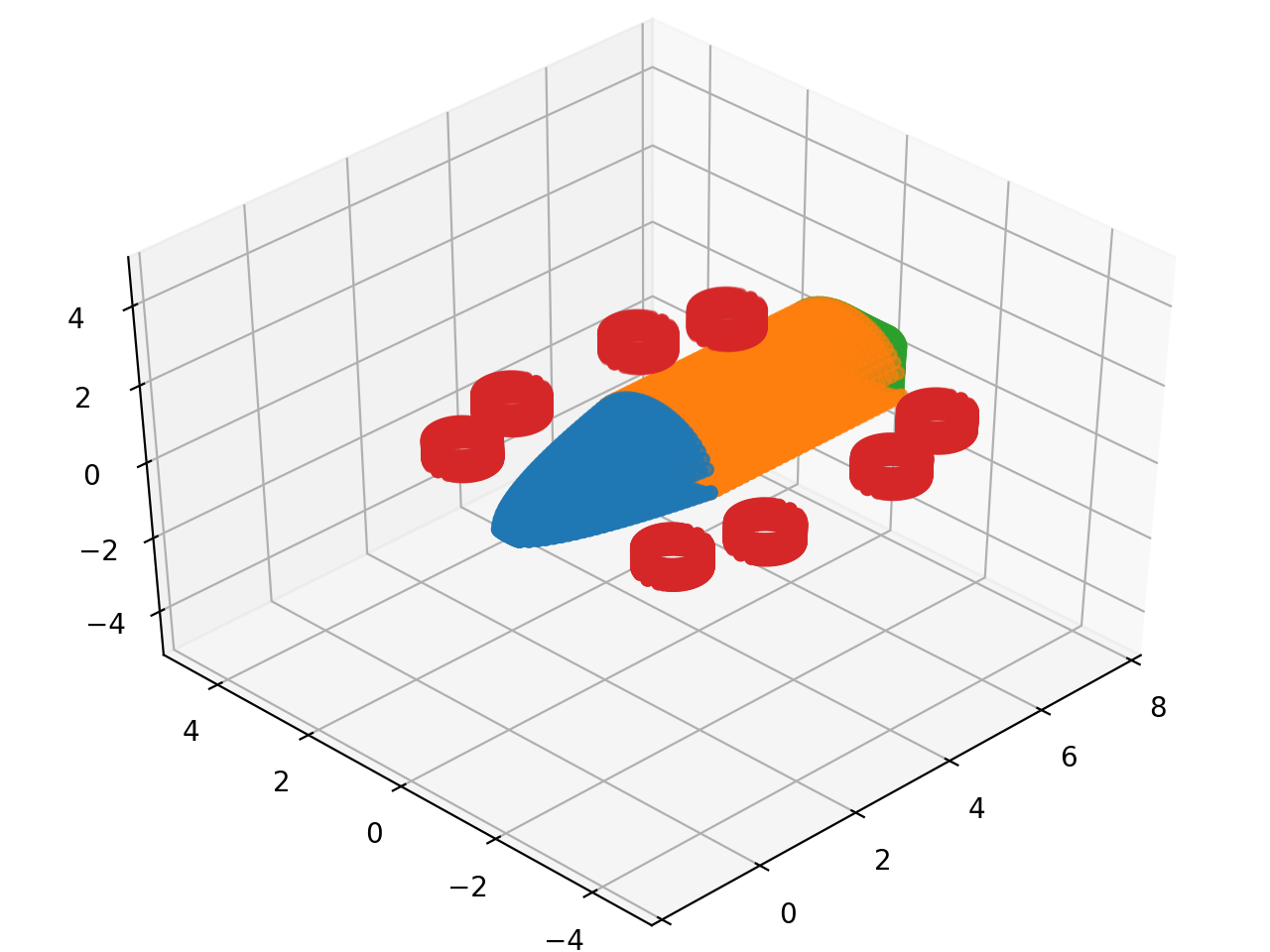 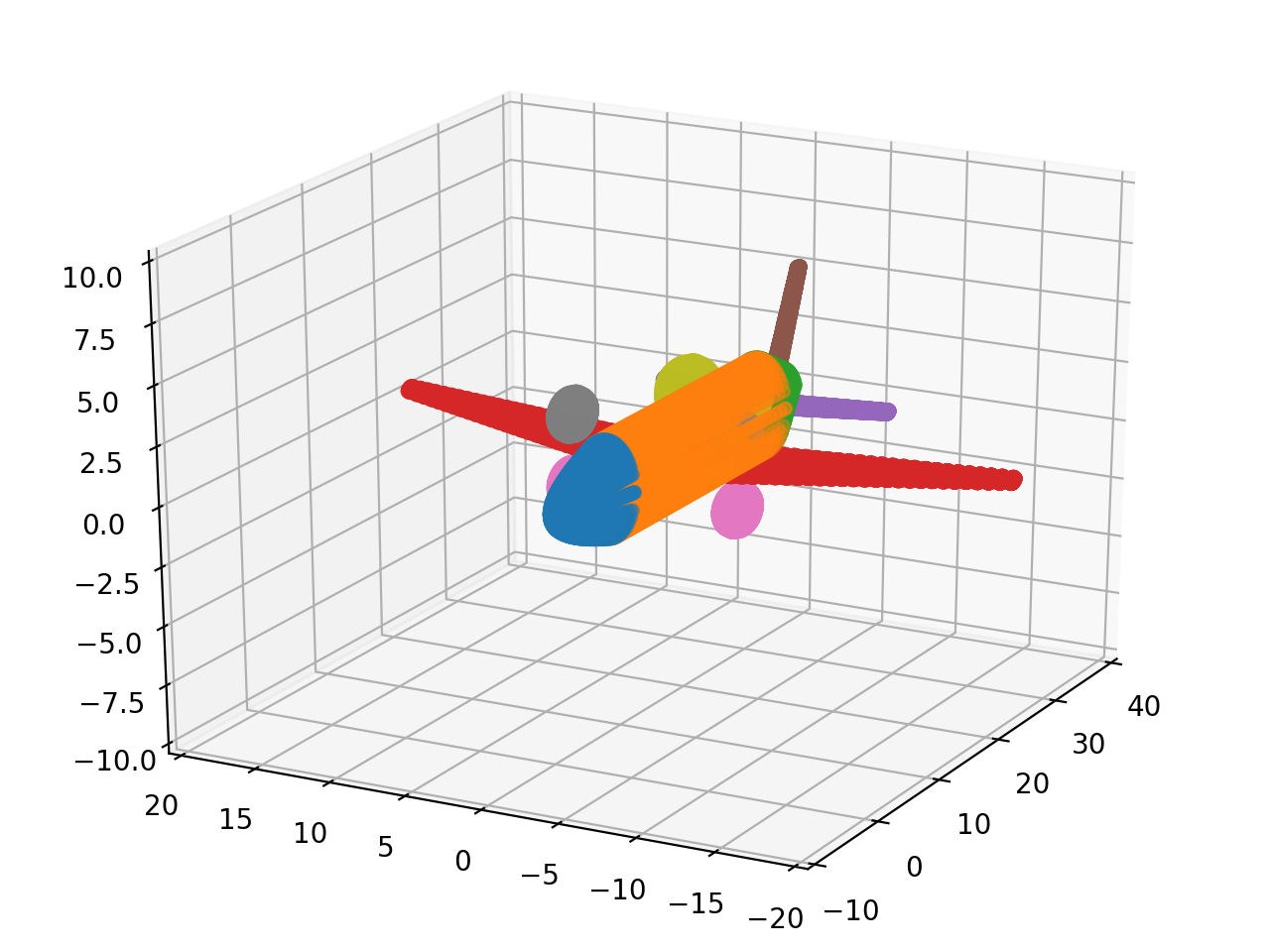 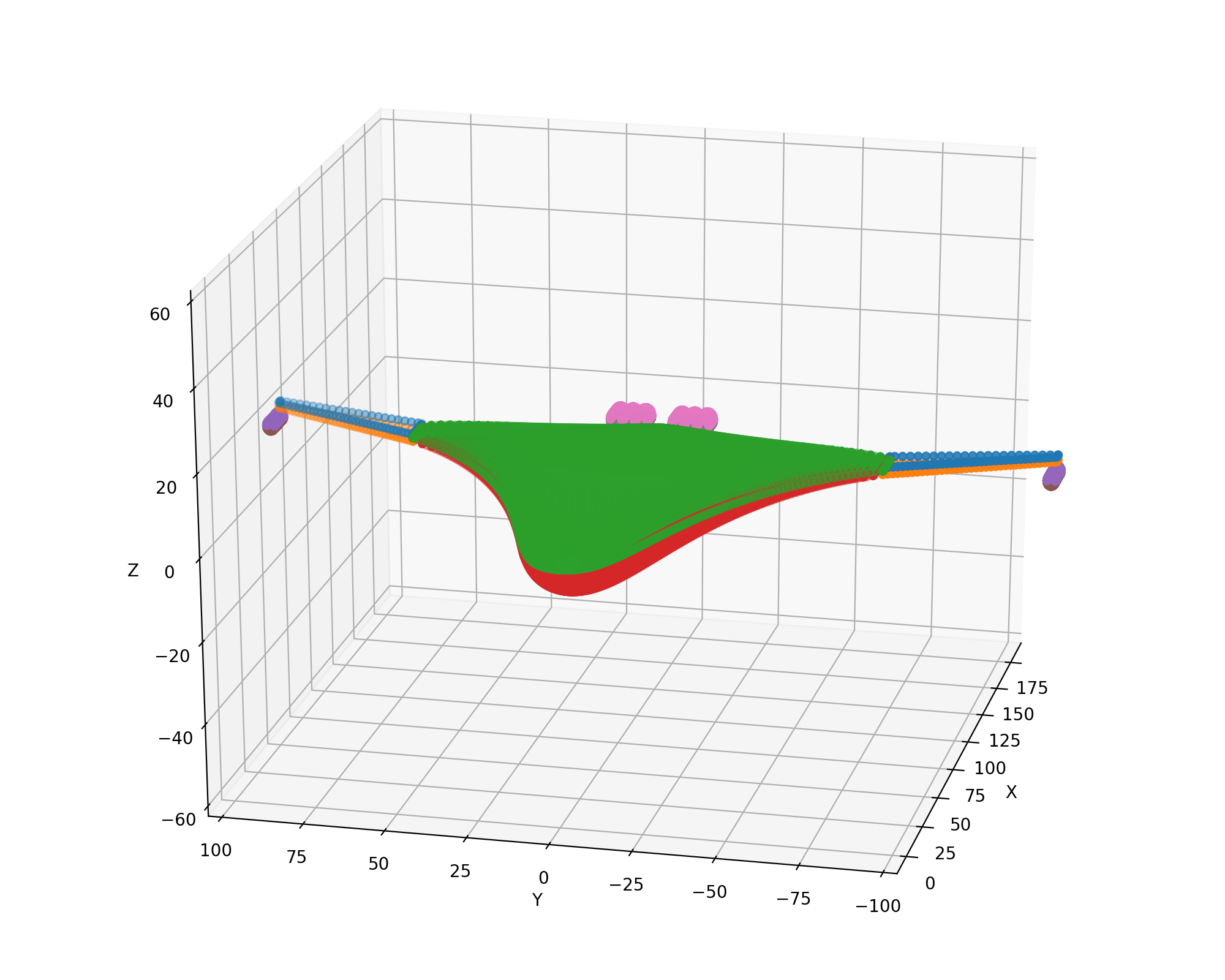 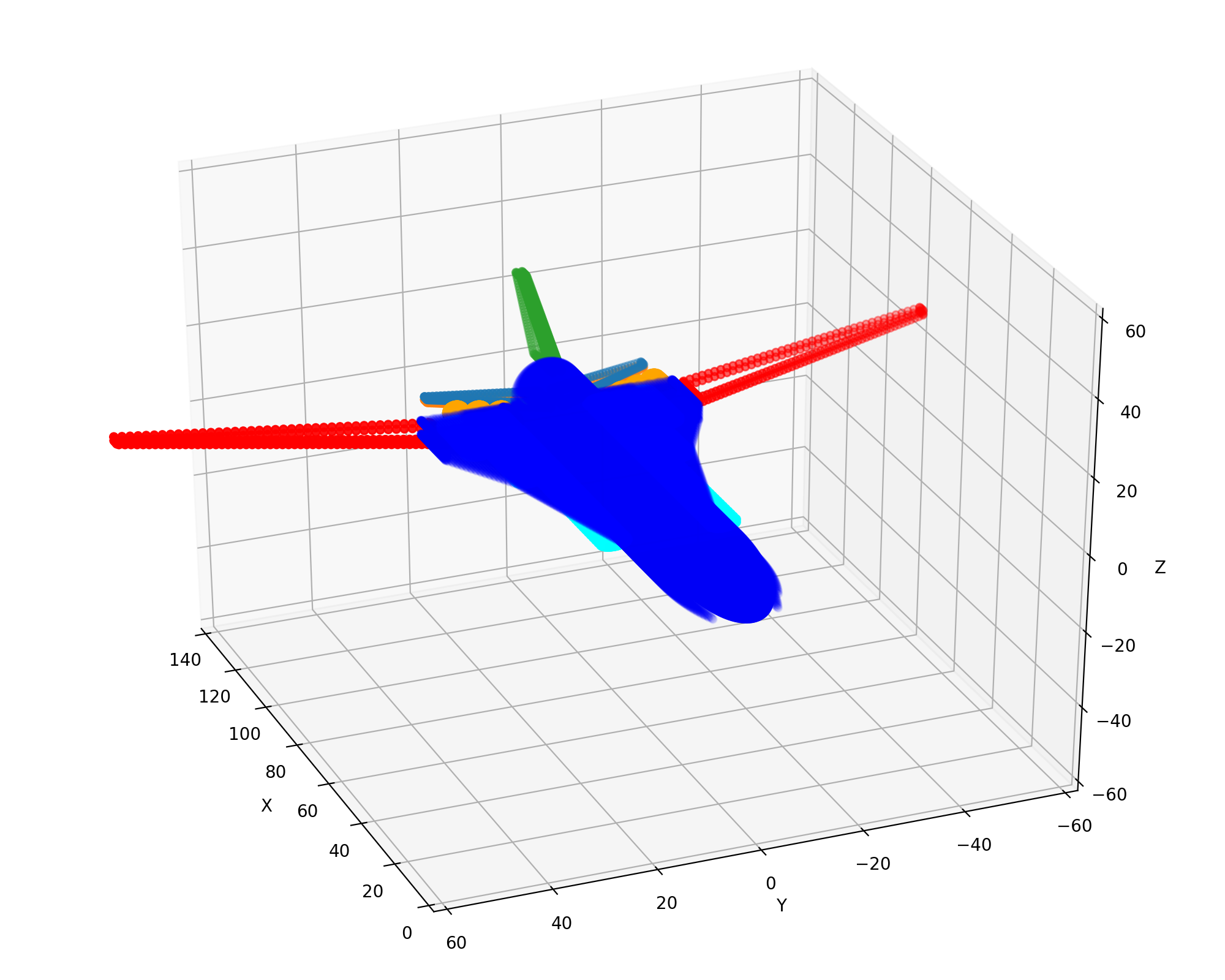 The round one is the engine, and the shape of the wings and fuselage is being reproduced. We will continue to upgrade from here. For details, see the chapter on aircraft drawing ~~.

If you like, please try to create a program together. Basically, in this library implementation, I would like to proceed without using advanced mathematics such as differentiation and integration. In addition, the performance calculation part becomes a bottleneck (especially the part that estimates engine performance calculation and aircraft shape), so for that part, Cython after implementing the optimization module It may be reimplemented by en / latest /) or C ++. For those who are learning Python together, the preparations are as follows.