This board, a little expensive at $ 229.00 (although it's a cheap FPGA evaluation board), I'm relying on at the moment I hesitated for about a month because Switch Science and Akizuki Denshi didn't handle it and it cost a shipping fee. I got it.

I just received it today and checked the operation.

This is a box. The Fedex box is big, so the impression is "little!". It's actually about twice the size of a Raspberry Pi. 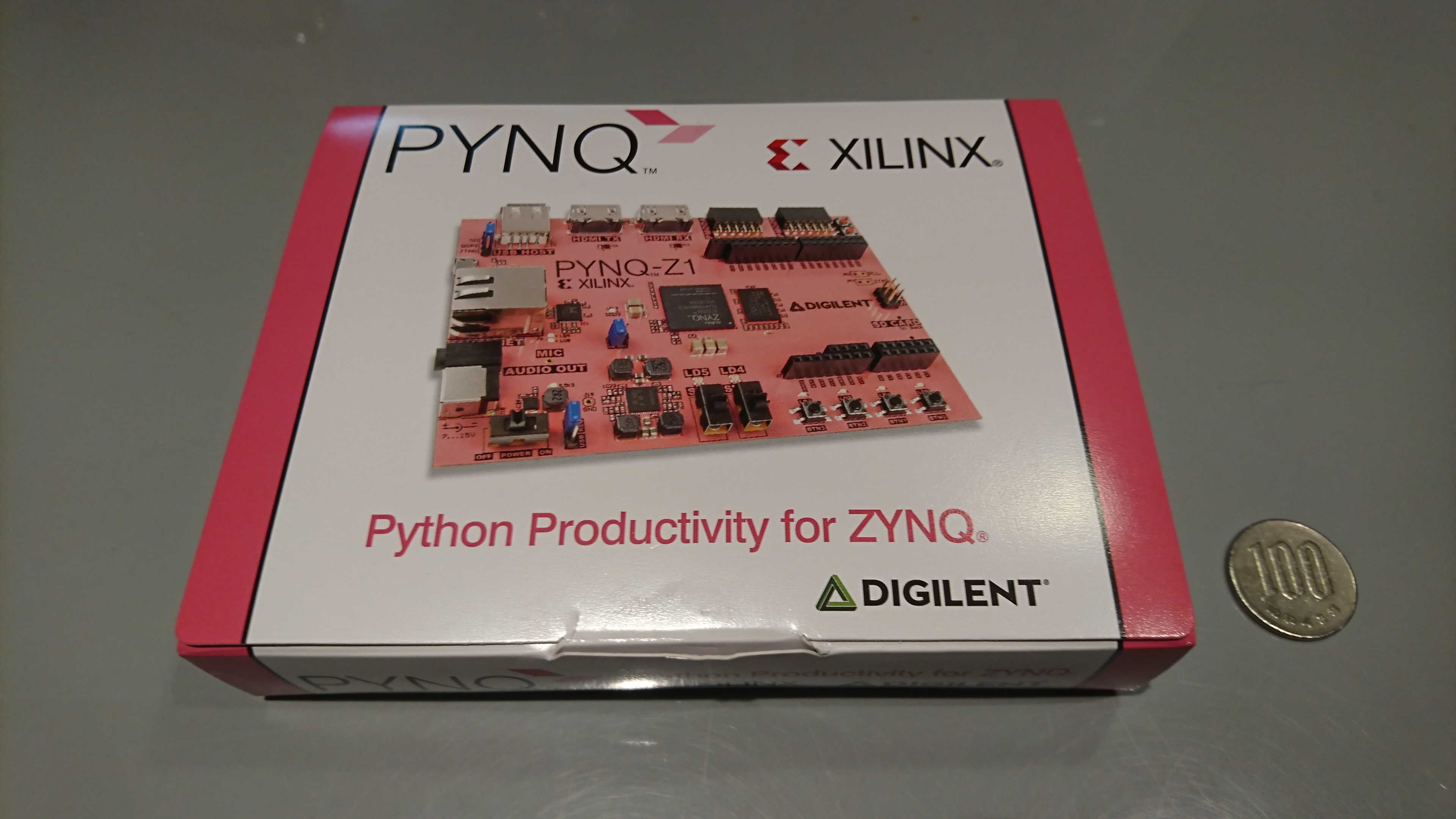 When you open it, it comes out as if it is sandwiched between conductive styrenes. I was confused for a moment because I thought it was in an antistatic bag. 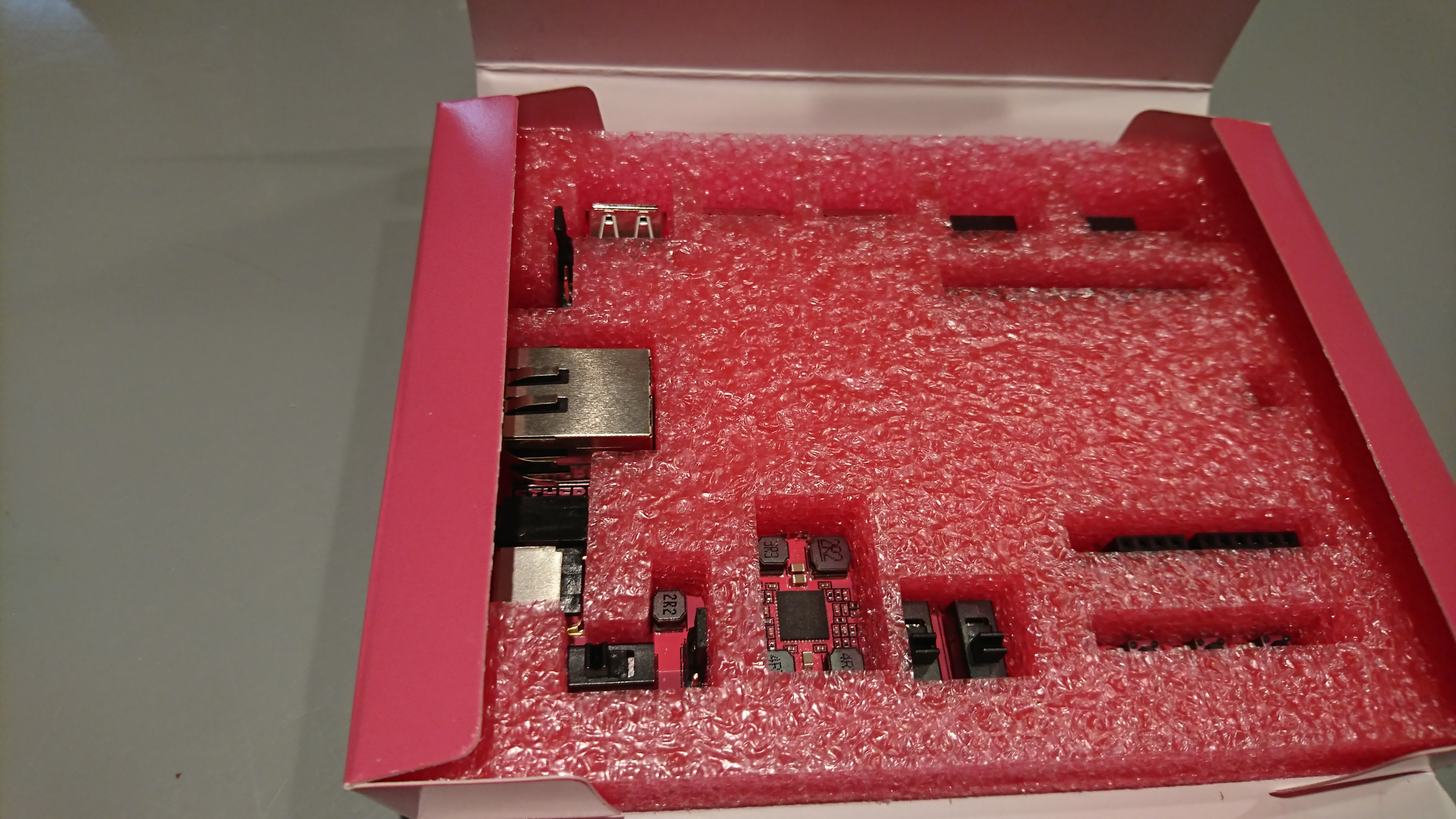 Preparation and switch on

Basically, you can follow Getting Started, but there are quite a few explanations on how to use USB serial communication. However, if it is the original usage of pynq, "Operate FPGA using Python", it is absolutely easier to operate it via the network, so I think you can skip it [^ 2].

In the initial state, the IP address is obtained by DHCP, so if you know the address of pynq-z1, you can log in with ssh, but as shown in the document page

First of all, let's check that pynq is alive.

If you enter the initial password xilinx and the Jupyter Notebook screen appears, it's OK.

To know the IP address

I used Advanced IP Scanner. If found successfully, the IP will be displayed with the host name ** PYNQ **.

Since Jupyter Notebook (Python3) is running, run the Python program here and run the IP of eth0. You can also read the address. 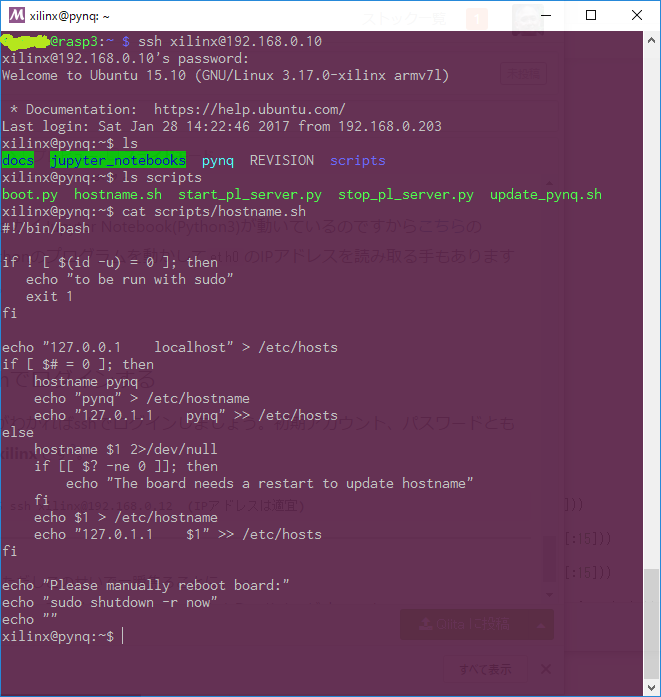 When I logged in, it was (for some reason) 15.10 on Ubuntu. There are some kind scripts under ~ / scripts. For those who are new to Linux? There is also.

Since it is Ubuntu, `sudo apt update && sudo apt upgrade` seems to be possible, but pynq (that is, the part that touches the FPGA using Python) cannot be updated without using a dedicated command.

~/scripts/update_pynq.Jupyter related example and program data of FPGA contents with sh(bitstream)Necessary items such as are automatically downloaded → updated.

pynq-z1 From purchase to operation check
From ROS for Windows installation to operation check
Sum from 1 to 10
Command operation to not move from home position
From 0 to Django development environment construction to basic operation
Changes from Python 3.0 to Python 3.5
Changes from Python 2 to Python 3.0
Transition from WSL1 to WSL2
From editing to execution
Post from Python to Slack
Cheating from PHP to Python
Porting from argparse to hydra
Migrating from Chainer v1 to Chainer v2
Tool to check code style
Anaconda updated from 4.2.0 to 4.3.0 (python3.5 updated to python3.6)
Migrated from Flask-RESTPlus to Flask-RESTX
Update python-social-auth from 0.1.x to 0.2.x
Migrate from requirements.txt to pipenv
Django installation and operation check
Switch from python2.7 to python3.6 (centos7)
Connect to sqlite from python
4th SmartHR library kiji is used to run e-Gov (operation check)
LINEbot development, I want to check the operation in the local environment