Wake on LAN (is it the correct wording?) Beyond the NAT of the condominium, which has been a dream for many years, has finally been realized. Since it is quite long, I will write it separately. I will write it as a memorandum, but I hope any one will help you. This time, I will write about "Getting a domain using GCP and MyDNS".

The purpose is simple and I just want to start my home desktop PC with Wake on LAN (WOL) from the outside like this. 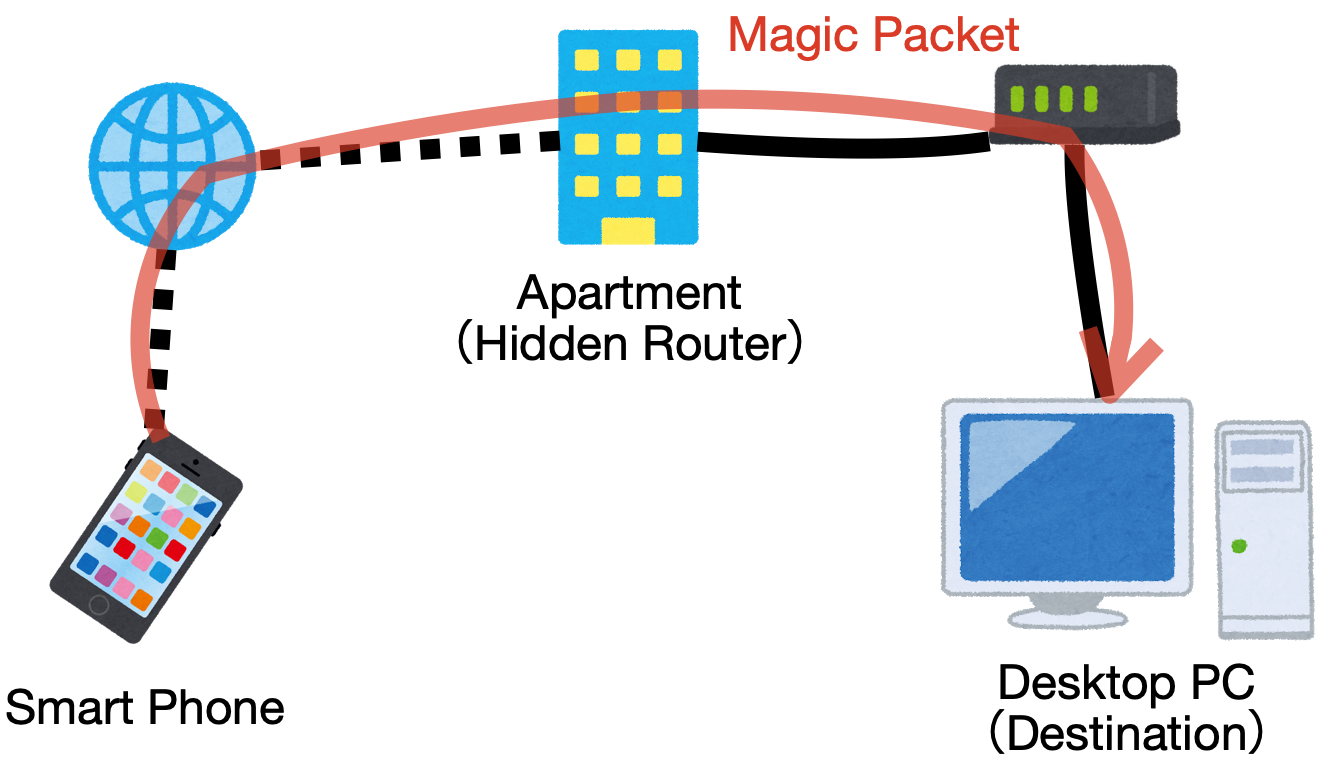 I faced the above problem, but fortunately I had a Raspberry Pi at hand, so I was able to solve it by connecting as follows using this.

--Completion image of the network 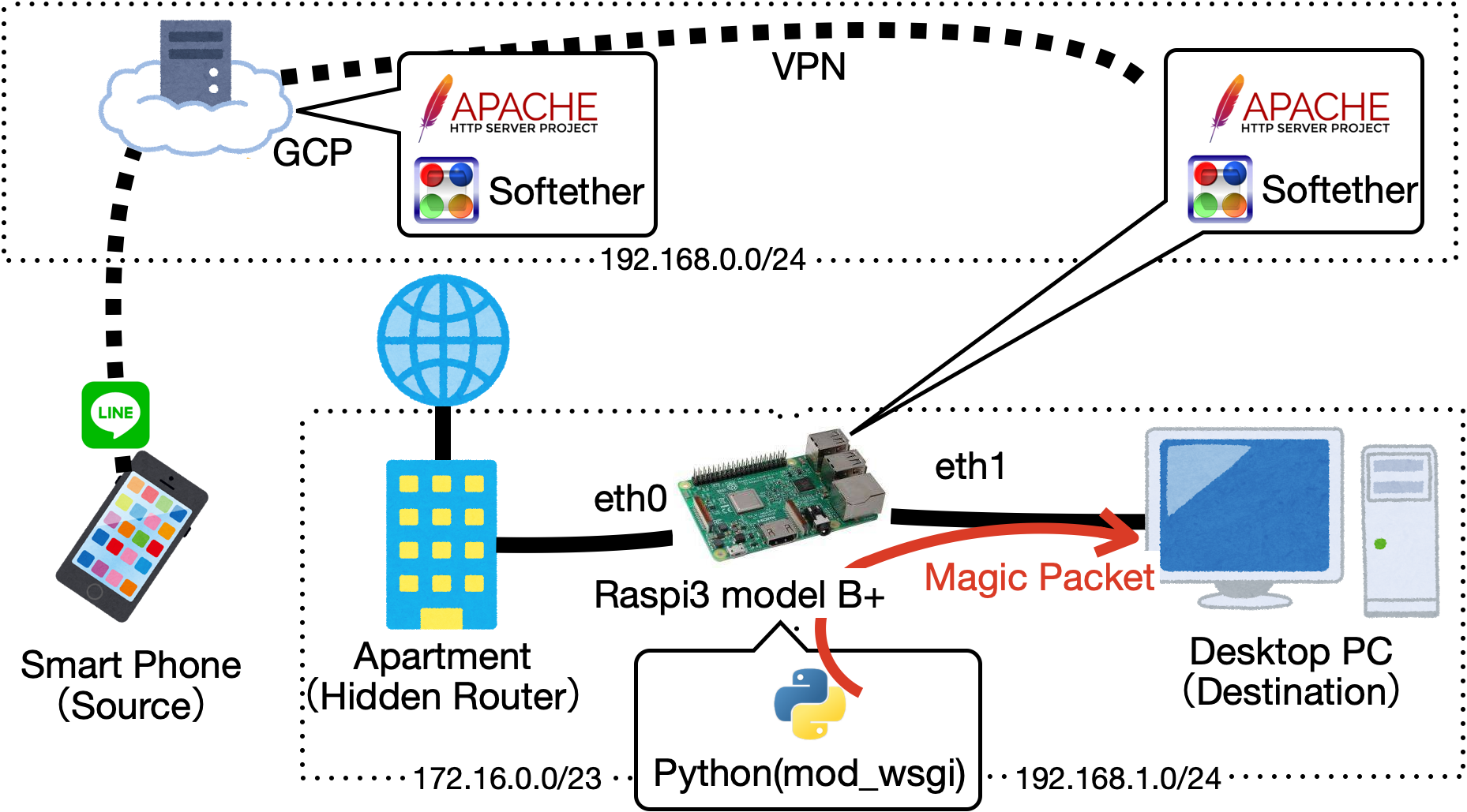 Get a domain using GCP and MyDNS

I will write it step by step as a memorandum. To achieve the above, first "get a domain using GCP and MyDNS".

First, build a server using GCP. Refer to Official site GCP (GCE) to start from now on, safely use the free frame Create it. 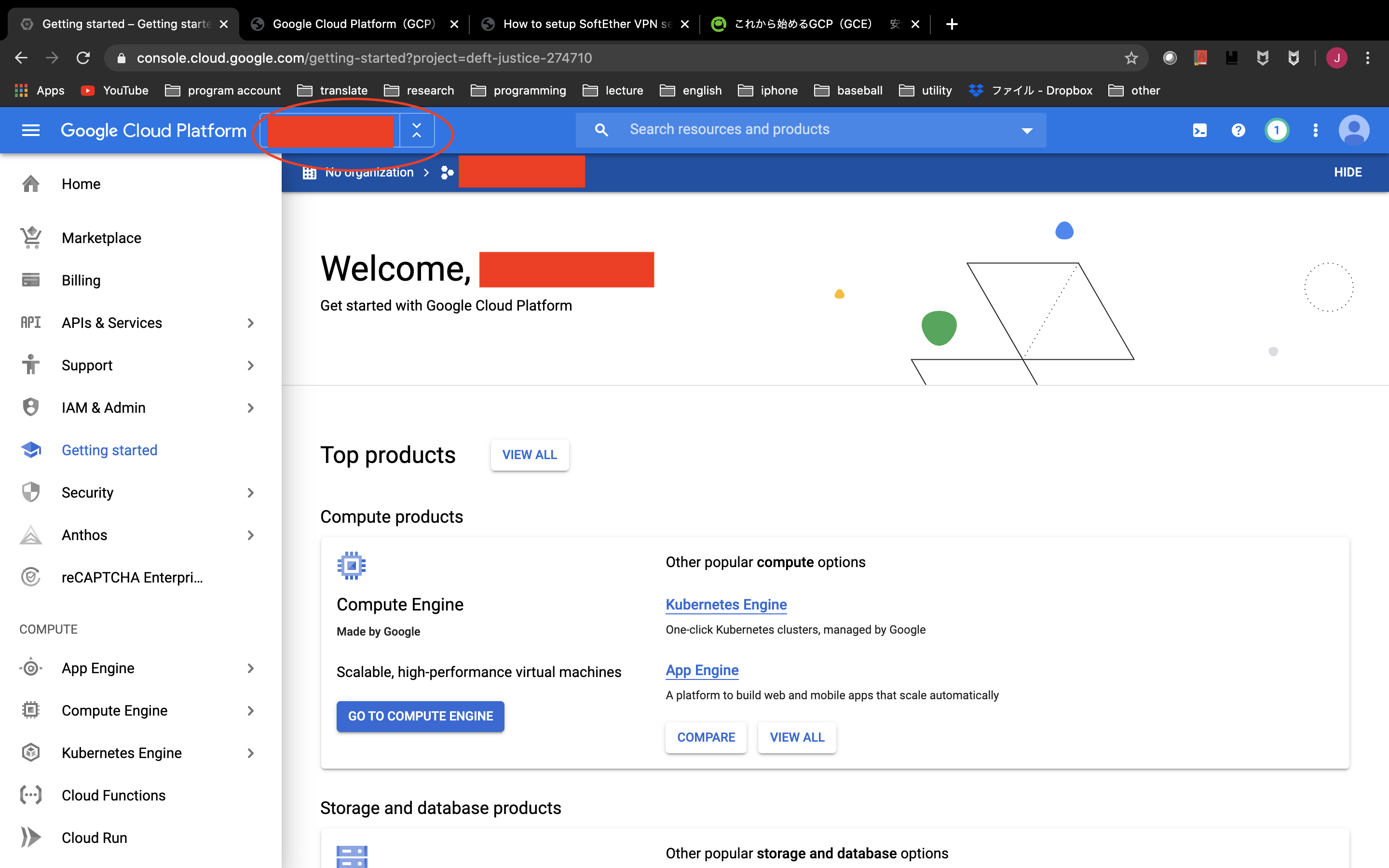 After creating the project, create a VM instance.

After creating it earlier, select the project.

For free, Region is the United States, and the machine type is a poor one. (Free frame) The part written later in the figure is the firewall setting. You can set it later, so you can leave it as it is.

For Boot Disk, I chose Ubuntu, which I'm used to. The capacity is free up to 30GB, so change it from the default value of 10GB.

After that, click "Create" to complete the creation of the VM instance.

Install gcloud so that you can connect to the VM instance created by SSH.

Here Quick Start> Download the tar.gz file according to your OS and put it in the directory you created earlier. Then unzip the file as follows and install it.

Restart the terminal and type the following command to complete the installation of gloud.

Check if SSH connection is possible from gcloud

After the installation is complete, link it with the GCP project you created earlier.

Next, make an SSH connection to the VM instance.

Set the firewall that was postponed. It seems better not to use the default port number. First, make an SSH connection to the VM instance and change the SSH settings.

After that, from the Web Set the {port number} set earlier in Compute Engine> VM Instances> View Network details as a rule. 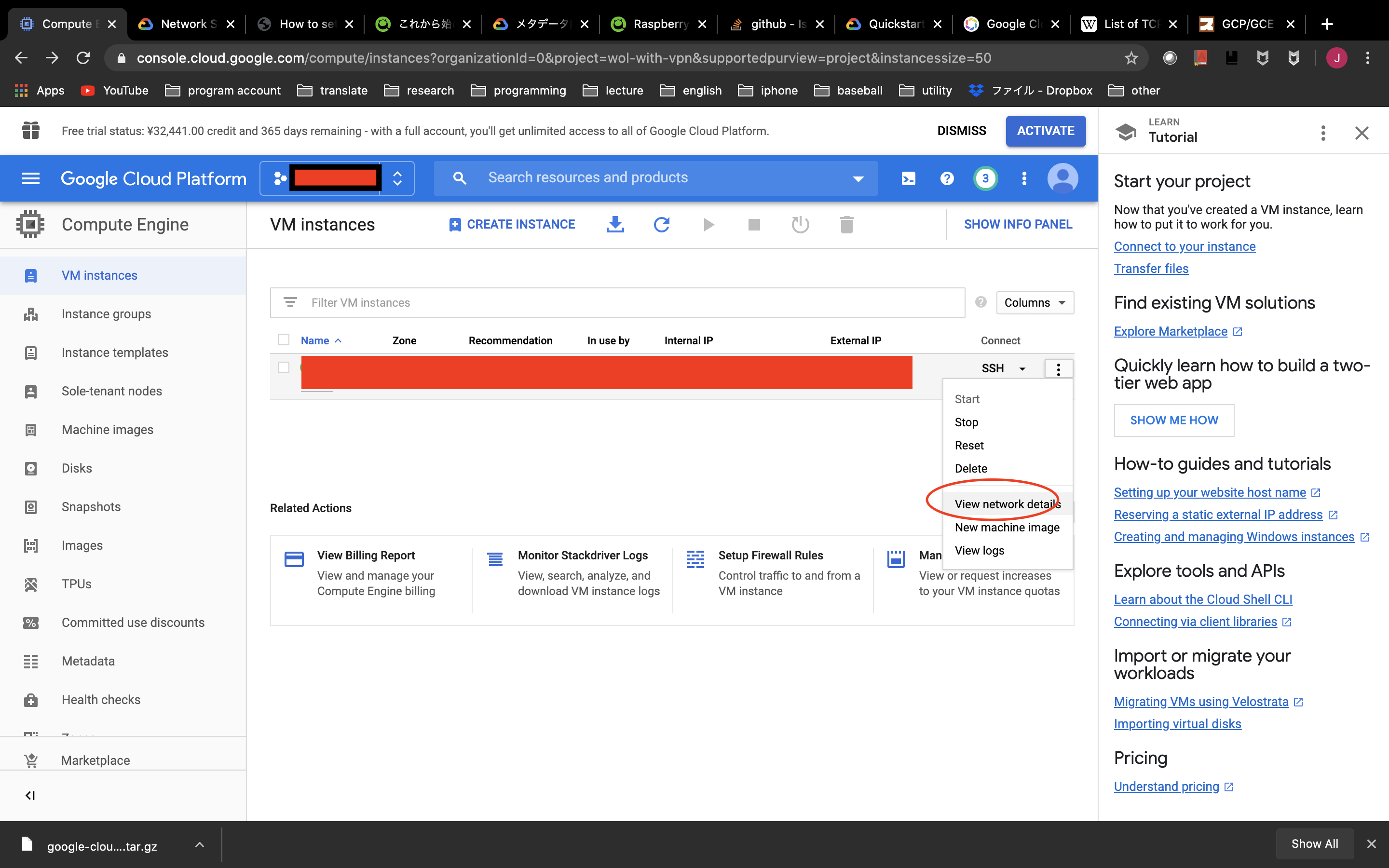 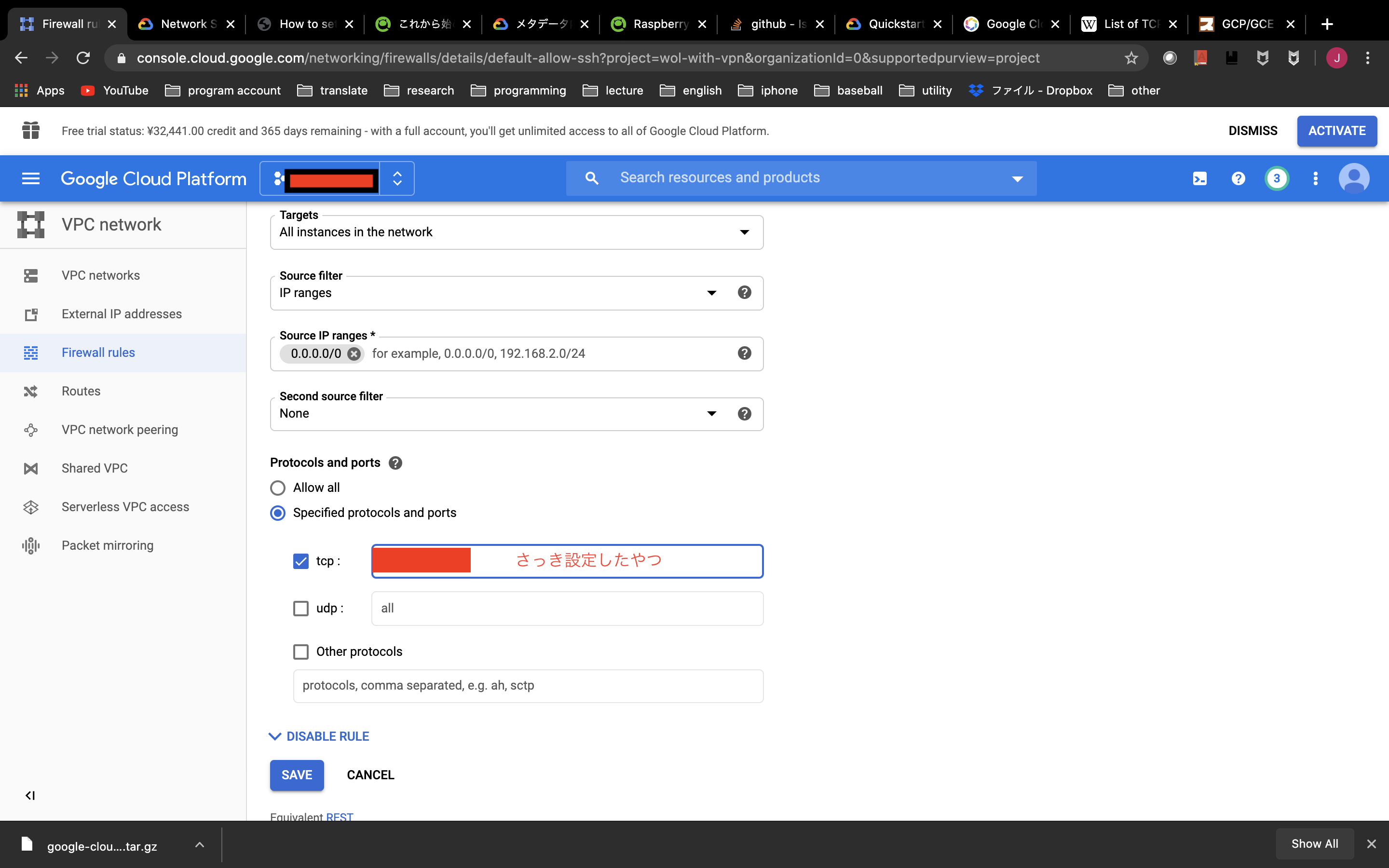 It is OK if you can save and connect again with the following.

By default, it is not set to Japan time, so change it. Ssh connection,

This completes the basic GCP settings. In addition, it is better to perform two-factor authentication for security, but I will omit it here.

If you pay, you can get a fixed IP, but once you get the domain, use mydns to do DDNS. After creating an account with Join us> Sign UP from myDNS,

Next, set DDNS from IP ADDR DIRECT. Return to the GCP site

As shown in the above figure, there is the current GCP External IP in the part hidden by the red square, so make a note of it and enter it. (Ignore the arrow) CHECK> OK to complete.

The IP will be notified when it is restarted and when it wakes up for 1 hour. First, SSH into GCP and create a shell script for the update.

Next, from the GCP site again

In EDIT> custom metadata, enter the following in the red square below.

This completes the notification settings when restarting.

Finally, just in case, set to notify every hour.

This completes the DDNS settings.

For the time being, it's long, so it ends here.

Start from now on GCP (GCE) Safely use the free tier