Since I started studying Rust, I made an x86 bootloader (self-proclaimed: Krabs) that speaks the Linux boot protocol during the winter vacation. In this article, I would like to write about the motivation for the development, the features and mechanism of the Krabs I created, and what I was happy about during the development.

Krabs is a chain loader with a 4-stage rocket configuration for x86 / x86_64 (Legacy BIOS) written in Rust. You can boot a bzip2 compressed ELF kernel. After decompressing the bzip2 compressed image and rearranging the ELF image that was extracted next, the kernel will be started. Internally it uses the libbzip2 C library, but everything else is written in Rust.

It has the following features.

The following is an example of booting 64bit vmlinux that utilizes the kernel command line and initrd.

The purpose is to practice Rust and familiarize yourself with Linux. I thought that coding at the level below the OS stack could be made more modern by using Rust. Also. From the process up to the booting of the Linux kernel, I also wanted to extract only the minimum necessary essence and finally create a boot environment that does not have a black box for me. Basically, the goal was to remove the following confusing and clogged parts.

Looking at the Linux kernel boot mechanism from a bzImage or GRUB bootloader can be daunting, but the reality is surprisingly simple. The basic thing is two points. Extract the compressed image, extract the ELF format image, relocate it according to the program header, and then The Linux / x86 Boot Protocol. Perform initialization processing according to (/x86/boot.html) and set parameters. Only this.

It may seem incredibly easy, but specifically, the following four types of initialization processing are performed.

** Communicating to the kernel: **

Krabs handles the above processing with a program divided into four stages.

Structure and overview of Krabs

Krabs supports HDDs and SSDs, but you must have an MBR. Also, one of the partitions must have the boot flag set. Stage3,4, kernel, initrd are stored in the boot partition with the bootflag.

By the way, you may be wondering why it supports legacy BIOS, so let me add to this. Only legacy BIOS is supported this time for the following three reasons.

Impressions I wrote in Rust

Rust is far easier than C to write low-level code. That is my personal impression.

The sense of security when the compilation goes through is amazing

Even if a problem occurs, you really only have to doubt the ʻunsafe` part. This time this was true.

The best way of thinking about packages and modules

You don't have to be frustrated with which object file to link to, like C.

Easy to play with modern code

The low-level code of no_std is also relatively modern. Also, I don't have to worry so much about not being able to use it or not being able to use it. It's a feeling, but the development speed may be faster than C? Best of all, Rust is fun to write. It is good to write with the type in mind. It's also fun to use various functions.

You can write chain loaders in Rust

I will call you. 16bit / 32bit can be loaded by the chain loader without much inconvenience. Due to the rocket structure, the chain loader must describe the unsafe part in order to go to the next stage, but it is good that the technique often used in C can be used as it is in the unsafe part. I thought. However, be careful with macros and closures inside the boot sector. I feel that the size is easy to explode.

Utilization and provision of C's assets

I think it's great that FFI allows you to utilize C's assets without much awareness. I'm using libbzip2 internally this time, but it was easy to use from Rust. On the contrary, it was easy to provide C with Rust's assets. You need malloc to use libbzip2, but I was able to provide a simple implementation in Rust on the C side. /src/stage_4th/src/bz2d.rs#L45).

Where I was addicted

To set up the page table, align the alignment with Linker Script (https://ftp.gnu.org/old-gnu/Manuals/ld-2.9.1/html_node/ld_14.html) and struct Attributes (struct) I tried to set it at https://doc.rust-lang.org/reference/type-layout.html#representations), but none of them worked. .. .. (It looked like the other data structures had been corrupted). Rust's alignment is left as it is, wondering if something is wrong. After all, I manually secured the area where I wanted to set the page table and solidified the address there. Example

A super big engineer helped me!

For some time after I created Krabs and was able to boot a simple ELF kernel, vmlinux couldn't boot properly and development was stopped for a short time. During that time, I wrote the README in English, tested simple operation examples, supported long mode, and advertised in English on twitter. I was wondering why it didn't work every day, and one day I was loading the bzImage source, something very happy happened.

In a tweet that I casually muttered in Japanese, what a super big engineer of AWS @msw and x86 / x86-64 Linux kernel tree is famous as a long-time maintainer @LinuxHPA (Hans Peter Anvin --Wikipedia) responded and gave me some advice! I was so happy that I took a screenshot. Thanks to this advice, the problem was solved at once, and I renewed my determination not to support the multi-boot spec (I don't really like the multi-boot spec, which originally embeds parameters inside the kernel). 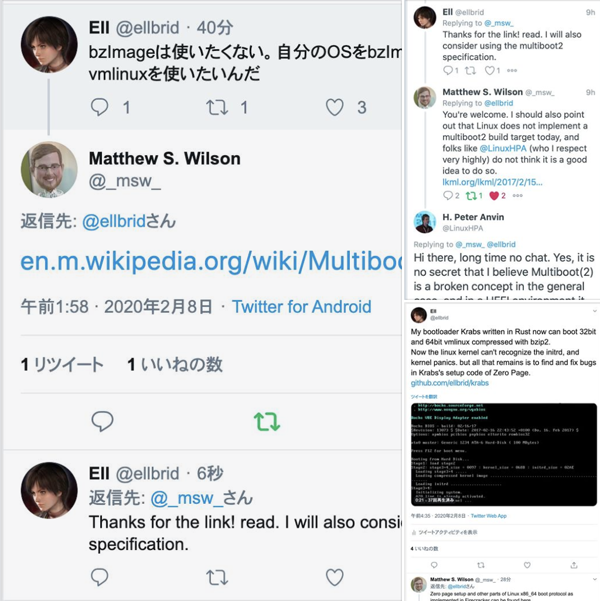 This time, he responded to Japanese, but I was connected after receiving a reaction to what was originally advertised in English. I thought again that it is important to send it in English.

Also, if I mutter in English, I feel that the frequency of receiving DMs directly on twitter and sending support messages by reply will increase. It will be very encouraging. I would like to introduce a happy message. Writing an OS in Rust also sent me a message.

Very cool seeing @rustlang being used to modernize the lower levels of the OS stack https://t.co/CpXXoWDt2t

Awesome! I will definitely check it out when I have some time.

... it's a waste to end, so I'd like to cover an example of finally building a minimal Linux system and booting it with Krabs so that you can experience Krabs.

I think it will be helpful. (Hereafter, I am working on CentOS7)

Use the following settings.

Or, I have prepared my recommended config with the above already set, so put this in .config I will copy it.

4: You have vmlinux in your current directory.

3: Use busybox instead of installing dynamic libraries and building the environment.

1: Create an image file with qemu-img. You can also use dd.

2: Create a partition with fdisk.

Create a boot flag on the first partition:

3: Create an ext4 file system on the second partition

Just run the following command: Vmlinux is now bzip2 compressed and written to disk.img with the bootloader.

By the way, in a comment from reddit, I was asked why I didn't use xz or gzip. I didn't think too much about it, but the reason is that it was easy to bring in bzip2. I've also heard news about porting bzip2 to Rust, which is one of the reasons I'm looking forward to it. However, as you can see from the above example of booting Minimal Linux, bzip2 is very slow. Therefore, it may move to gzip or xz in the future.

By the way, I like SpongeBob, and I borrow the name of this bootloader from Mr. Krabs and Plankton. My secret goal is to use Krabs instead of GRUB on my Linux boots. (I'm planning to start making my own OS named sponge).

I also aim to create an original joke Linux AMI that uses this bootloader on Amazon EC2 (also known as the Sandy Linux AMI lol). I wondered if I should use Rust's systemd rustysd for init for Rust's coreutils. thinking about. Is ssh cool with this? Your dreams will spread.

Also, I found that the star on github was really nice, so I decided to star more and more from now on.

Thank you for reading until the end. If you have any likes, comments, advice, issues, pull requests, etc., please do not hesitate to contact us.