[LINUX] Let's play with JNetHack 3.6.2 which is easier to compile!

Following the flow of "Rogue", one of the earliest computer RPGs, the general term for games whose dungeon changes each time you play is called "Roguelike" [^ 1]. NetHack is a straightforward, character-based, simple-looking game, but it's still very popular. [^ 2] You can also prepare one tmux tab for this and play between tasks lol

The English version of NetHack itself is included in the packages of various Linux distributions, so it is easy to install, but there is no Japanese version. JNetHack Project has created and distributed a patch for Japanese localization, so let's build it yourself using this.

Previously, because Japanese was output in EUC-JP, it was necessary to take measures such as using cocot in the terminal of UTF-8 locale or temporarily changing the character code setting. However, in the latest version (2020/03/14) of JNetHack 3.6.2-0.1, the input / output character code is completely UTF-8, and it is now possible to build and play almost as it is. It was. There is no need to edit MakeFile with an editor in advance, and it can be compiled with only simple steps, and the threshold is low, so let's play with it.

You can also download it from the JNetHack project page, but here on the terminal

Let's drop it by saying.

Along the way, you may get a message that the patch application to the file for Windows failed, but you can ignore it (please let me know if it's wrong).

The procedure is terrifyingly easier than it used to be lol

Since a directory called nh is created in your home directory

Start with. The screen during play looks like this.

Meaning of symbols on the screen

I extracted it from the help and made it a table.

My character is @ and the basic move command is the same as Vim H`` J K`` L. Other keyboard commands are mentioned in the help, but I can't remember them so I created a cheat sheet. 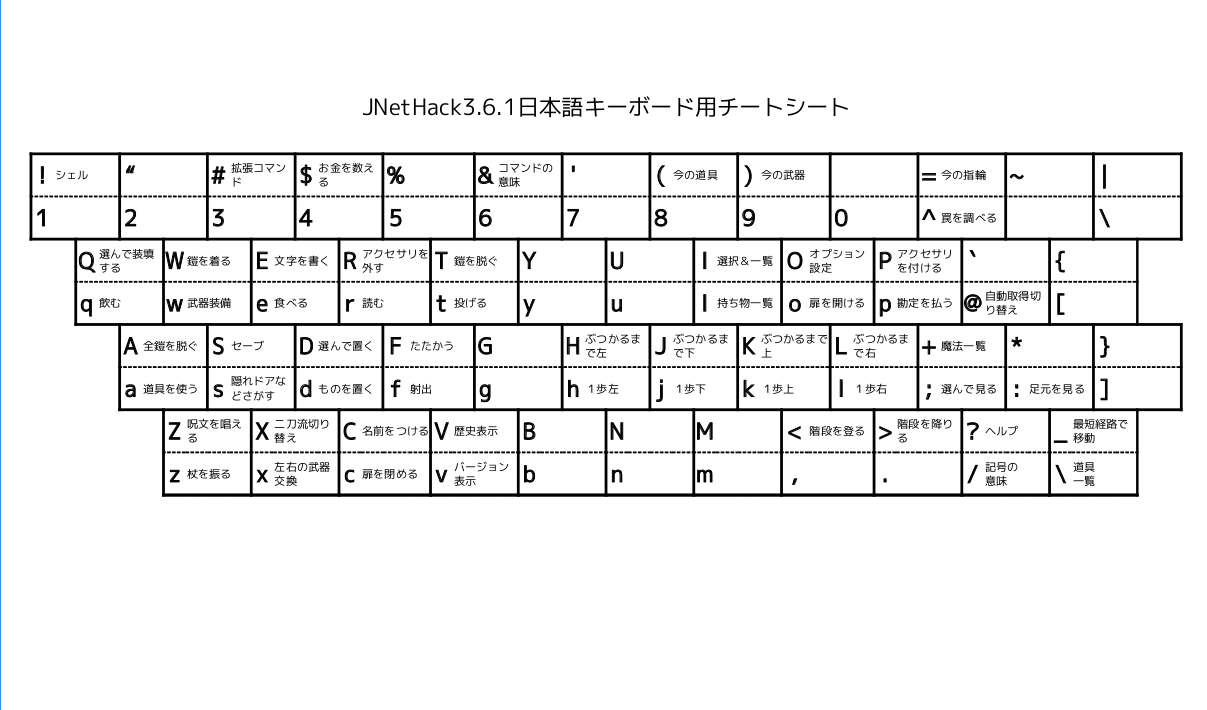 I'm thinking of updating because there are leaks and it is difficult to understand.

Detailed settings and how to play

I haven't played with a firm seat yet, so I can't explain much lol The following reference sites are quite old and have some differences from the current JNetHack, but I think they will be helpful in various ways.

The following is an article that talks about the appeal of JNetHack and how to play it.

Then, let's challenge yourself to capture the "Labyrinth of Terror"!

[^ 1]: "Mystery Dungeon Series" such as "Torneko" and "Shiren" are also classified as roguelikes. [^ 2]: There are occasional questionnaires on Twitter such as "What game changed your life?", But it seems that there are quite a lot of people who raise this game.