What Mars looks like previous article, But after testing on an in-house system, [Open source on GitHub](https://www.alibabacloud.com/blog/mars-matrix-based-universal-distributed-computing-framework_594606?spm = a2c65.11461447.0.0.4be1c339z4ytI2). This article introduces the distributed execution architecture implemented in Mars.

Mars provides a library for distributed execution of tensors. This library is written using the actor model implemented in mars.actors and includes schedulers, workers and web services.

The graph submitted by the client to Mars Web Service consists of tensors. The web service receives the graph and submits it to the scheduler. Before submitting a job to each worker, Mars' scheduler compiles the tensor graph into a graph consisting of chunks and operands, parses and divides the graph. The scheduler then creates a set of OperandActors that control the execution of a single operand on all schedulers, based on a consistent hash. Operands are scheduled in topological order. When all operands are executed, the entire diagram is marked as complete and the client can retrieve the results from the web. The entire execution process is shown in the figure below. 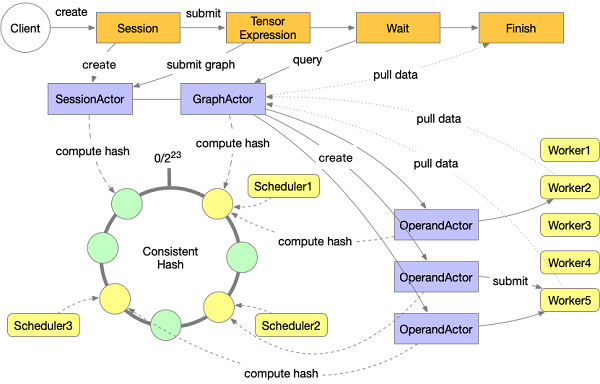 The client submits the job to the Mars service via the RESTful API. The client writes code in the tensor, transforms the tensor operation into a graph composed of tensors via session.run (tensor) and sends it to the Web API. The Web API then sends the job to the SessionActor and creates a GraphActor for graph analysis and management in the cluster. The client begins querying the execution status of the graph until it finishes executing.

GraphActor first transforms a tensor graph into a graph consisting of operands and chunks according to the chunk settings. This process allows the graph to be subdivided and run in parallel. It then performs a series of parsing on the graph to determine the operand priority and assigns a worker to the start operand. For this part, see Preparing the Execution Graph. Then, for each operand, create an OperandActor to control the specific execution of the operand. When an operand is in the READY state (as described in the section ʻOperand state`), the scheduler selects the target worker for that operand and submits a job to that worker for actual execution.

When you populate the Mars scheduler with a tensor graph, it produces a finer graph of operands and chunks, depending on the chunk parameters contained in the data source.

After the chunk graph is generated, reduce the size of the graph by fusing the adjacent nodes in the graph. This fusing also allows you to take full advantage of acceleration libraries like numexpr to speed up computations. Currently, Mars is fusing only the operands that form a single chain. For example, if you execute the following code.

Mars fuses the ADD and SUM operands with the FUSE node. Land operands do not merge because ADD and SUM do not form a simple straight line. 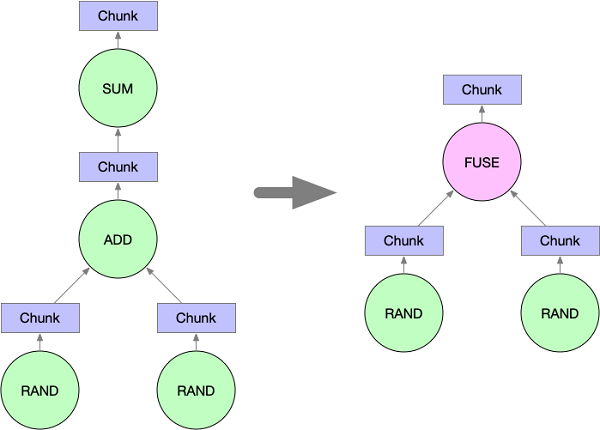 Assigning workers to operands is important for improving graph execution performance. Randomly assigning the initial operands increases network overhead and can lead to imbalanced job allocation between different workers. The assignment of nodes other than the initial node can be easily determined according to the physical distribution of the data generated by the precursor and the idle state of each worker. Therefore, the execution graph preparation stage only considers the assignment of initial operands.

There are several principles that must be followed regarding the assignment of initial workers. First, the operands assigned to each worker should be as balanced as possible. This allows computational clusters to have higher utilization during the entire execution phase, which is especially important during the final phase of execution. Second, the first node allocation requires minimal network traffic when subsequent nodes run. In other words, the initial node allocation should follow the principle completely.

Please note that the above principles may conflict with each other. Allocation solutions with minimal network traffic can be very distorted. We have developed a heuristic algorithm to balance the two goals. The algorithm is described as follows: :

When a graph composed of operands is executed, a proper execution order can reduce the amount of data temporarily stored in the cluster, thus reducing the likelihood that the data will be dumped to disk. .. The right workers can reduce the total network traffic running.

Since our goal is to reduce the total amount of data stored in the cluster, we prioritize the operands in the READY state.

When the scheduler is ready to run the graph, the worker for the first operand has been determined. Assigns workers for subsequent operands based on the worker with input data. If there is a worker with the largest size of input data, that worker is selected to execute subsequent operands. When there are multiple workers with the same input data size, the resource state of each candidate worker plays a decisive role.

The following describes the meaning of each state and the operations Mars performs in these states.

--UNSCHEDULED: The state when the upstream data of the operand is not ready. --READY: The operand is in a state where the upstream data for that operand is not ready. In such cases, use Properties to change the value of Properties. The scheduler sends a stop message to other workers and sends a message to the worker to start running the job. --RUNNING: The operand will be in this state when its execution is started. When this happens, the OperatingActor checks to see if the job has been submitted. When this happens, the Operating Actor checks to see if a job has been submitted. The OperatingActor then registers the callback with the worker and gets a message that the job is complete.

Mars workers include multiple processes to mitigate the impact of the GIL at runtime. Certain executions are completed in a separate process. To reduce unnecessary memory copies and communication between processes, Marsworkers use shared memory to store execution results.

When a job is submitted to a worker, it is first queued to wait for memory allocation. When memory is allocated, the data on other workers and the data dumped to disk on the current worker is reloaded into memory. At this point, all the data needed for the calculation is already in memory and you are ready to start the actual calculation process. When the calculation is complete, the worker puts the job in shared storage. The transition relationship between the four execution states is shown in the figure below.

The Mars worker controls the execution of all operators within the worker through the ExecutionActor. The Actor itself is not involved in the actual operation or data transfer, it just submits the task to other Actors.

The scheduler's OperandActor submits the job to the worker through the ExecutionActor's ʻenqueue_graphcall. The worker accepts the operand input and caches it in the queue. At this time, the worker accepts the worker's operand posts and caches them in the queue. When the scheduler decides to execute the operand on the current worker, it calls thestart_execution method and registers the callback through ʻadd_finish_callback. This design allows execution results to be received in multiple locations, which is useful for disaster recovery.

ExecutionActor uses the mars.promise module to process execution requests from multiple operands at the same time. Specific execution steps are linked via the "then" method of the Promise class. When the final execution result is stored, the previously registered callback will be triggered. If an error occurs in any of the previous execution steps, the error is passed to the handler function registered in the catch method for processing.

In such cases, the scheduler sends a large number of operands to the selected worker. Therefore, for most execution times, the number of operands submitted to the worker is usually greater than the total number of operands the worker can handle. The worker must sort the operands and select some of the operands to execute from. This sorting process is performed by the TaskQueueActor, which maintains a priority queue that stores information about operands. At the same time, the TaskQueueActor runs the job assignment task on a regular basis and allocates execution resources to the topmost operand in the priority queue until there are no more resources to execute the operands. This allocation process is also triggered when a new operand is submitted or when the operand execution is complete.

Mars workers manage two aspects of memory. The first part is the private memory of each worker process, which each process owns. The other is memory shared by all processes, held by plasma_store in Apache Arrow. I am.

To avoid process memory overflow, we have introduced a worker-level QuotaActor that allocates process memory. Before starting execution of the operand, the operand sends a batch of memory requests for chunks of input and output to QuotaActor. If the remaining memory space can meet the request, the request is accepted by the QuotaActor. Otherwise, the request will be queued to wait for free resources. When the associated memory is freed, so is the requested resource. At this point, QuotaActor can allocate resources to other operands.

Shared memory is managed by plasma_store and typically occupies 50% of total memory. Since there is no possibility of overflow, this part of memory is allocated directly via the associated plasma_store method, not via QuotaActor. When shared memory is used up, Marsworkers try to throw unused chunks to disk to free up space for new chunks.

Data in chunks dumped from shared memory to disk can be reused by subsequent operands, but reloading data from disk to shared memory is especially exhausted and loaded. If you need to dump other chunks to disk to accommodate one chunk, it can require a lot of IO resources. So if you don't need data sharing (for example, if chunks are used in only one operand), load the chunks directly into the process's private memory instead of shared memory. This can significantly reduce the total job execution time.

Mars is currently iterating rapidly. We are considering implementing worker-level failover and shuffle support in the near future, and are planning scheduler-level failover.