TL;DR Last time, HTML with SSI (include virtual) described in AWS is stored in a specific bucket of S3 and the sources in the include are combined with Lambda. I made a mechanism to store it in another bucket, but it is the Alibaba Cloud version of it.

What I wanted to do

Since OSS (Object Storage Service) is a static site hosting service, it cannot be processed dynamically on the server side in principle. Of course, the CDN side (Alibaba Cloud CDN), which is the cache destination after that, cannot be used either.

In that case, I think that the standard method is to build a local development environment, keep them in separate files locally, and combine them when compiling, but OSS + is an existing site that originally used SSI. Unfortunately, that flow cannot be introduced for all projects, including when transferring to a CDN.

So, if SSI was originally used, I tried to adjust it on Alibaba Cloud side so that it can be used as it is without replacing it as it is.

(As a premise, the settings of RAM and KMS, which are the IAM of Alibaba Cloud version, have been completed)

Basically, it is customized for Alibaba Cloud based on the previous article. [AWS] Do SSI-like things with S3 / Lambda I think this article by SB Cloud is useful for setting up Alibaba Cloud. Manipulate object storage with event-driven service Fucntion Compute

The configuration is the same as last time. So if you only use OSS and Function Compute and you need Alibaba Cloud CDN. 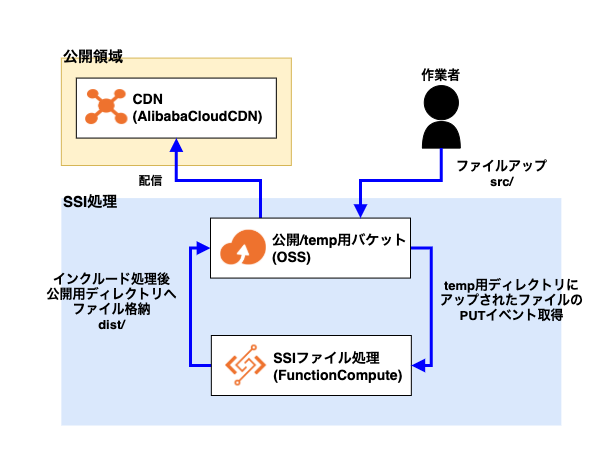 OSS In Alibaba Cloud version, there is only one bucket to upload files. The process is divided into two directories, a directory for temp and a directory for public use.

The name can be anything. This time it is oss-ssi-include.

It is assumed that the access permissions are set appropriately.

Creating a public directory and a temp directory

Create the public directory dist and the temp directory src in the bucket by clicking the "Create Directory" button.

Last time, HTML with SSI (include virtual) described in AWS is stored in a specific bucket of S3, and the sources in the include are combined with Lambda. I made a mechanism to store it in another bucket, but I prepared it because it was necessary to make it in Alibaba Cloud for various reasons.

Also, if you want to get information on Alibaba Cloud in Japan, SB Cloud's Engineer Blog is recommended. I also used this one as a reference.

But is this important? .. That's all from the field.