About the process that the Linux kernel handles x86 microcode

About the root file system image

I want to check the contents a little more, so use the cpio command to extract the initramfs image. However, I can't extract the files as I saw in lsinitramfs. Only the kernel directory could be extracted.

After investigating the reason for this, I came across the kernel.org documentation.

I see. Since the initrd image is a "combined initrd image", it can be inferred that the cpio command could only extract the cpio format part that contained the first microcode. By the way, I realized that I had a lot of vague knowledge about microcode. With that in mind, in this Advent Calendar, I will write an article based on "How Linux handles microcode in the root file system".

In addition, ** I'm sorry to all AMD fans nationwide. This time, only Intel is the scope of the article **.

Description based on Intel SDM

The first few sentences of Intel SDM Vol.3 "9.11 MICROCODE UPDATE FACILITIES" are important to know about microcode updates. The summary is as follows.

In this document, I will write about the Linux implementation for the first step "passing data blocks to the BIOS".

The sources are located in arch / x86 / kernel / cpu / microcode. The file name is too straightforward and very easy to understand.

Below, from the excerpt information from Intel SDM, you can see that the information obtained here is "Type, Family, Model, Stepping ID".

You can also see that the information stored in eax follows the following format: 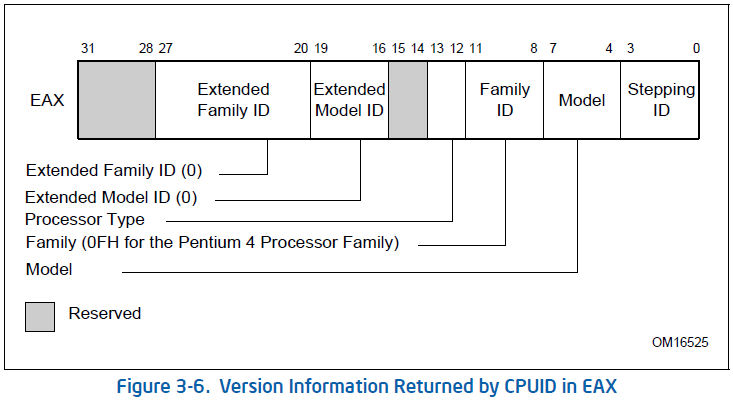 Here, it is determined whether the CPU that runs it supports microcode update. Recall that the CPUs that support microcode updates are "P6 and above". Then load_ucode_intel_bsp () is called. 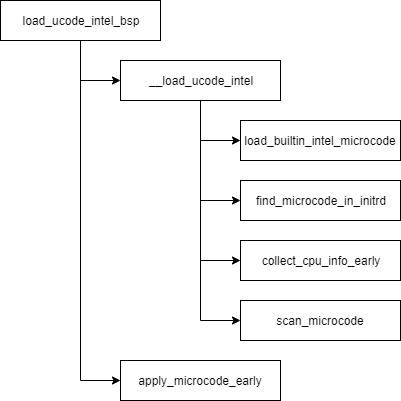 The outline of each function is as follows.

Search for data blocks from initrd

Gets the location and size of the initrd image expanded by the bootloader. This RAM Disk image is /boot/initrd.img-5.3.0-24-generic written at the beginning. Also, the beginning of this image starts in cpio format. Therefore, according to the cpio format, the file containing the data block is searched by the path name. For the cpio format, please refer to "Simple explanation and figure of cpio" in Article I wrote.

The path name is as follows.

find_cpio_data () finds the file corresponding to the previous path in the cpio image in RAM and returns the start address and size of the area where it is located. This information is represented by the following structure. data is the beginning of the file containing the data block and size is the file size.

The structure in the file is as follows.

According to Intel SDM Vol.3, the format of each data block is as follows.

The most important parameter in the data block header is the Processor Signature. This is a ** value that represents the processor type to which the corresponding microcode update is applied **, and is a value that consists of "Extended family, extended model, type, family, model, stepping". Each data block is designed for a particular processor type.

In addition, the points to be held regarding the header are as follows.

In a nutshell, scan_microcode () processing is "parse GenuineIntel.bin in memory from the beginning, find the latest data block applicable to the type of processor you are running, and find its address and size. I will return it. " Please read the code by referring to "9.11.3 Processor Identification" of Intel SDM Vol.3.

Pass the data block to the BIOS

Finally pass the data block to the BIOS.

It was a rush, but I looked for a data block in the root filesystem image and looked at how it works. There are many times when you deviate from what you originally wanted to write. It's not good to take a side road at work, but it's fun when doing private technical research. After all it is fun to read the code and literature to know various things. I think the Advent Calendar is a good opportunity to give us such an opportunity.

Well then, there were various things this year, but this year when there are only a few left, and even after next year, Happy Hacking!

How to get kernel source code for Ubuntu Linux

At least for Ubuntu Server 19.10, it's easiest to get the linux-source with the apt command. The source code is tarred, so it needs to be unpacked.

Overall, I'm grateful to Intel SDM. After all it is a must-have. Also, I think Mamedanuki's article is a very valuable article that can be read in Japanese. I also enjoyed reading it. We would also like to thank the authors for the other articles cited in the text.