This article is the 15th day article of Kobe University Advent Calendar 2019.

The purpose of this article is to be registered as CVE-2019-5489 announced at CCS 2019 ** Page cache attacks [ Summarize ^ 1] ** and actually implement a simple PoC. The implemented PoC can be found at Page Cache Side Channel Attacks (CVE-2019-5489) proof of concept for Linux.

Page cache attacks [^ 1] shows some examples of attacks in a local / remote environment. For example, Covert Channel (an attack that transfers sensitive information between processes that are not allowed to communicate by security policy), ASLR bypass, and keystroke timing acquisition. This time, I implemented PoC of Covert Channel in the local environment of Linux.

A certain understanding of the page cache is necessary for creating a PoC, so we will explain and experiment with the page cache. The page cache is a software cache used by the Linux kernel and is used to cache data on the disk. Upon a file read / write request from a user process, the kernel looks in the page cache, accesses the disk if it does not exist, and adds the read data to the page cache. This allows later processes that use the same file to use the data in the page cache without accessing the disk. The important thing is that ** when you access the file, the read data will be added to the page cache **. Also, since the page cache is created on RAM, its capacity is finite. Therefore, if the cache capacity is insufficient, some pages need to be expelled from the page cache. Page cache management is managed by two lists, an active list (active page LRU list) and an inactive list (inactive page LRU list), which collects recently accessed pages in the active list and keeps them in the inactive list for a long time. Collect pages that are not accessed and evict pages from the inactive list. As shown in the figure below, when the page is accessed, the state moves as shown by the used arrow. For example, the first access to a page will go from state 1 to 2, and if that page remains in state 2 and the page is accessed again, it will move from state 2 to 3 and enter the active list. In other words, it is possible to ** enter the active list with more than one access **.

Let's actually experiment with the movement of active and inactive lists. First, turn off the swap function, create a 1.0 GB file, clear the page cache, and create a test environment. (If the RAM capacity of the PC is small, it may be better to reduce the size of the created file)

Next, repeat the command to display the used capacity of the active / inactive list of the page cache and the command to read the 1.0 GB file created above. 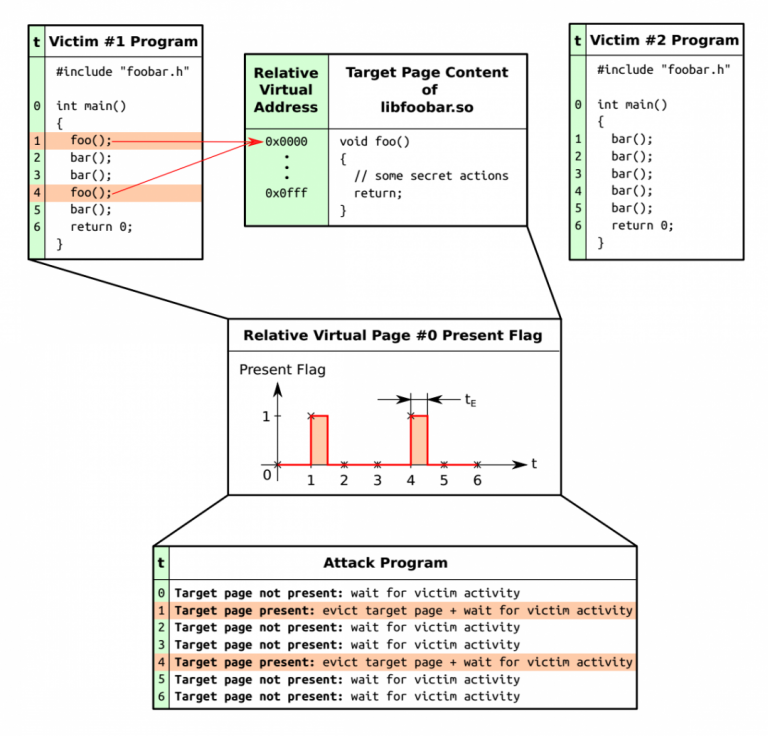 The outline of paga cache attacks will be explained using the above figure.

The prerequisite for this attack is that ** the attacker's program and the victim's program can access the same page cache **. This is possible if the attacker and victim programs are running on the same operating system and are using the same shared libraries and files. In the example above, libfoobar.so is shared among the three programs (Victim # 1 Program, Victim # 2 Program, ʻAttack Program), so Victim # 1 ProgramYou can also access the same page cache where the data inlibfoobar.so that you accessed to execute the foo () function is cached from ʻAttack Program.

In this way, ** attackers can see the behavior of other programs through side-channels such as mincore (2) and the time taken for page faults. ** In the example above, we can only know when the foo () function was called, but if we could know the behavior of a program that depends on sensitive information, the attacker could know that sensitive information. You will be able to know.

Covert Channel is a type of attack that creates the ability to transfer sensitive information between processes that are not allowed to communicate by security policy. page cache attacks allow you to send information from one process to another through ** information about whether a page is in the page cache. ** **

I created a PoC that actually sends data from the sending process to the receiving process. The program is located at Page Cache Side Channel Attacks (CVE-2019-5489) proof of concept for Linux. The same shared library is used between the sending and receiving processes, the sending process changes the function to call in the shared library depending on the data (sensitive data) to be sent, the receiving process reads the state of the page cache, and the page of which function caches Determine if it is in and receive the data. In addition, two Valid signals (used by the sender) and Ready signals (used by the receiver), which are used to synchronize the timing of data transmission / reception between processes, are also transmitted / received using the page cache state of the shared library. .. The reason why two Valid signals are required is to prevent conflicts with valid signals between two consecutive data transmissions and receptions.

In the following, the code for synchronization between processes is omitted, and only the code for sending and receiving data using the state of the page cache will be described.

A shared library was simply created with 64 pages of alignment between each function as shown below. By calling this function, the corresponding page goes into the page cache and can be used for side-channel attacks. The reason why the alignment size is not set to one page is that when a function is called by profetch, the page containing another function is not included in the page cache. This time I used my own library, which is easy to attack, but I think the same thing can be done with other shared libraries such as libc.

As in the program below, use the mincore (2) system call to get the page cache information of the page containing each function and restore the data. For example, if check_state (func_1) and check_state (func_6) return 1, the recovered data will be 0x42 (= 0b1000010), indicating that the sender sent B. ..

You can repeatedly access a sufficiently large file (file) as shown in the program below. However, the page cache of the shared library may be in the active list, so access the file twice so that the pages in the active list can also be expelled. (Actually, if you read only once, the eviction was not successful.) By doing this, you can finally get the pages func_0 (), func_1 (), ... func_7 () out of the page cache. After that, the data transmission may be repeated.